Bird owners should immediately contact their veterinarian or call the USDA toll-free hotline (866-536-7593) to report sick birds, including backyard flocks and migratory birds like ducks and geese.

Get details on the most recent U.S. bird flu outbreaks at usda.gov/AvianInfluenza.

The viruses that cause avian influenza (or “bird flu”) mainly infect and spread among wild aquatic birds, such as wild ducks, geese, and storks, and domestic poultry, such as chickens and turkeys. Backyard flocks (poultry or non-poultry) are also at risk, as are captive or pet birds with access to the outdoors, where they could be exposed to infected wild birds.

“Highly pathogenic” avian influenza viruses (HPAI) are of particular concern because they cause severe disease and death in poultry. H5N1 viruses are the most notable in this regard. Most wild birds don’t get sick from HPAI but can still circulate and carry the viruses wherever they migrate. The U.S. Department of Agriculture’s Animal and Plant Health Inspection Service keeps data on HPAI detection in wild birds and poultry (commercial poultry and backyard or hobbyist flocks) in the U.S., which you can use to see if there’s an outbreak of HPAI in your county.

Besides wild birds, can other animals and people catch avian influenza?

Certain mammals—including domestic cats and dogs—may become infected if they eat sick or dead infected birds, and there might be other ways the virus spreads. Still, the likelihood of cats and dogs catching HPAI seems low—there is a low number of reported cases in non-bird species, despite large outbreaks of HPAI in birds across the world.

The few reported cases of natural H5N1 HPAI infection causing illness have been outside the U.S. These include a cat that ate an infected pigeon and a dog that ate an infected duck—both in Thailand in 2004. In 2006, two other cases of H5N1 HPAI infection were confirmed in cats in Iraq. In those two cases, the route of infection was not definitively determined, but the source was presumed to be infected chickens. All animals died of their infection.

Although people may become infected through exposure to an HPAI-infected bird, the happens only rarely, and typically involves infected poultry. The risk of people catching HPAI from infected cats or dogs is considered extremely low.

What are the signs of avian influenza in birds?

Early detection of HPAI in birds is important to stopping its spread. Infected poultry, and possibly pet birds, may show one or more of the following signs:

What precautions are recommended for owners of pet birds or backyard flocks?

Numerous cases of HPAI have been reported in backyard flocks in the U.S. Although pet (possibly caged) birds are unlikely to be exposed to wild birds, the rare possibility remains that pet birds could catch HPAI, too.

Owners of pet birds or backyard flocks are encouraged to stay informed about where HPAI is occurring. In regions experiencing outbreaks, certain precautions can help stop the viruses from spreading: 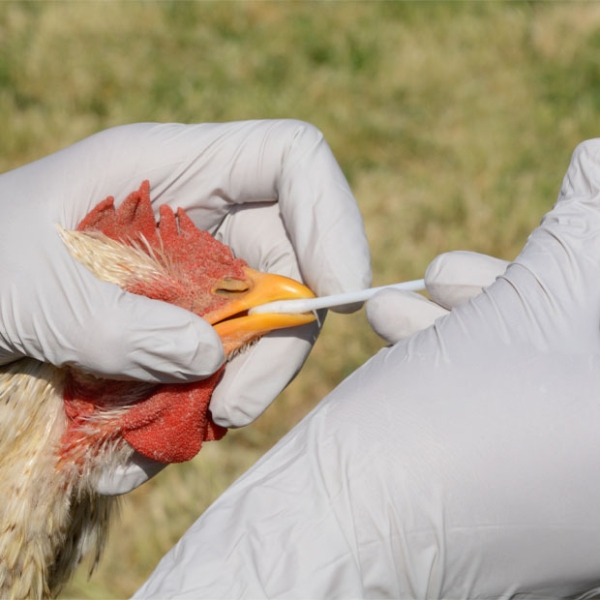 Learn about avian influenza, signs of infection, methods of prevention, and more.

Get answers to frequently asked questions about avian influenza.