History of the AVMA 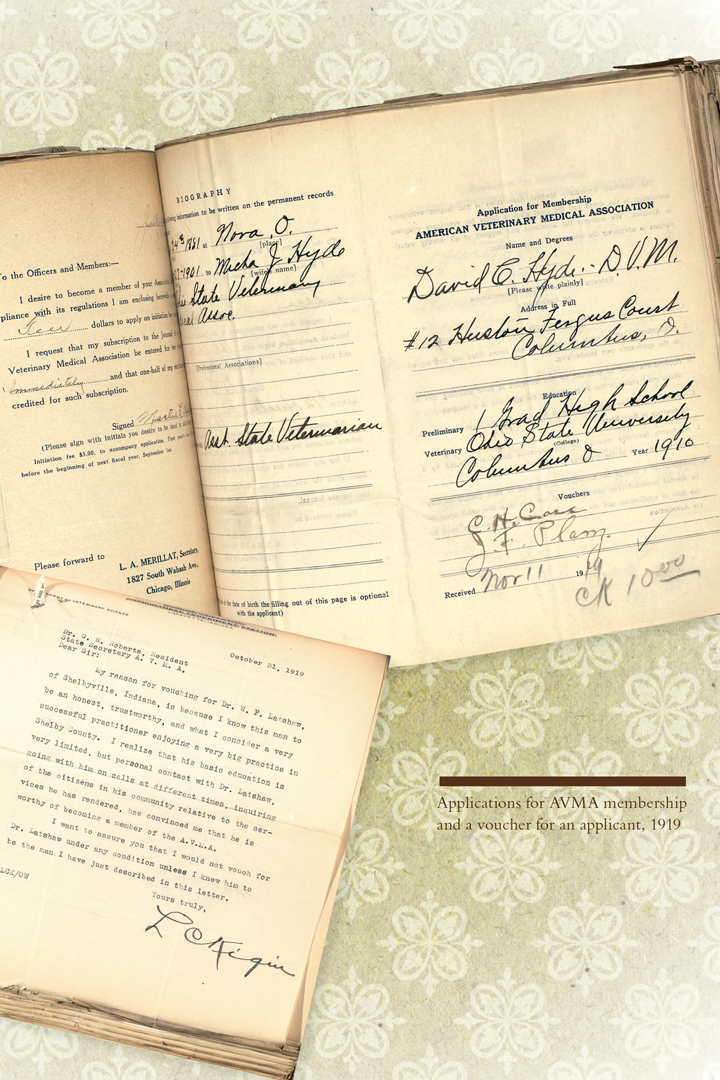 The AVMA's origins date to 1863, when veterinary surgeons from seven states convened for the first time in New York. The meeting was prompted by correspondence among practitioners along the East Coast and attended by about 40 delegates representing these states: New York, Massachusetts, New Jersey, Pennsylvania, Maine, Ohio, and Delaware. This group found the United States Veterinary Medical Association (USVMA), which became the American Veterinary Medical Association – AVMA in 1898.

The USVMA founders initially agreed to take in as members any “veterinary practitioner” or student of three years’ standing who passed an oral examination and had documents or testimonials related to their qualifications.

By the time Dr. Liautard returned to his native France in 1900, veterinary medicine was quickly becoming a recognized medical profession. The AVMA took on its current name in 1898, and by 1913 had grown to 1,650 members. Membership requirements were revised to require graduation from a three-year, accredited veterinary school.

Today, the American Veterinary Medical Association has more than 100,000 members, encompassing every facet of the veterinary profession. In addition to caring for the nation's beloved pets – from dogs and cats to birds, horses, reptiles, and more – AVMA’s member veterinarians serve in medical research, academia, prevention of bio- and agroterrorism, food safety, public service, industry, the uniformed services, and beyond.

The AVMA has continued to evolve, grow, and lead the veterinary profession. The American Journal of Veterinary Research joined JAVMA in 1940 and has become the primary forum for veterinarians to publish basic and clinical research studies.
The USVMA’s initial meetings became annual sessions in 1889, and the First International Veterinary Congress of America was the association’s 30th anniversary meeting in 1893. The AVMA Annual Convention evolved from these, drawing up to 10,000 attendees and offering hundreds of hours of professional education for both veterinarians and veterinary technicians.

Since its inception, the AVMA has been a driving force to improve the practice of veterinary medicine in the United States, as well as a leader in embracing diversity across the profession.

Four women graduated from U.S. veterinary schools in 1915 and began practicing, but female veterinarians were active in the USVMA and AVMA well before that. Women attended the annual meeting for the first time in 1896, and Dr. Helen Richt became the first woman to hold AVMA office in 1937, as secretary of the section on small animals. Dr. Mary Beth Leininger became the AVMA’s first female president in 1996.

AVMA diversity extends beyond gender. Dr. Luis Santa Maria became the first Mexican veterinarian to present a paper at an AVMA meeting in 1921, and by 2005 the AVMA convened our first diversity symposium. The association in 2004 adopted an official policy on diversity, which has evolved into our policy on diversity and inclusion.

Around the time of the USVMA’s founding, veterinary medicine in the United States was largely the domain of uneducated or self-educated practitioners who “decided to call themselves farriers or veterinary surgeons, often assuming that title overnight, according to a 1934 JAVMA article.

USVMA leaders wanted to change that.

The association formed a Committee on Intelligence and Education early in its history – the precursor of the current Council on Education. In 1887, AVMA leaders unanimously approved a resolution seeking uniform requirements for veterinary schooling and a standard graduation exam by a common examining board.

Educational standards set by the AVMA have continued to grow more rigorous since then, and the Council on Education is now recognized by the federal government as the official accrediting body for veterinary education in the United States. The minimum educational standards first adopted by the association in 1921 – Essentials of an Approved Veterinary College – have evolved into the Council on Education's Standards of Accreditation.

Starting with an 1863 meeting that elected Josiah H. Stickney as the first president, the AVMA has been led by a diverse array of officers and held annual meetings all across our nation.

AVMA Board of Directors, by year

Meet the veterinary leaders who have served on the AVMA Board of Directors since 1969.