Medication is an often-underutilized tool that can greatly help with managing aggression in dogs, according to veterinary behaviorist Dr. Karen Overall.

“I’ve never not treated aggression with medication, because aggression is fundamentally an anxiety disorder,” said Dr. Overall, a professor of behavioral medicine at the University of Prince Edward Island Atlantic Veterinary College.

“We change how the dog thinks by using selective serotonin reuptake inhibitors and tricyclic antidepressants that work by remodeling neurons and make acquiring new behaviors easier,” she explained. 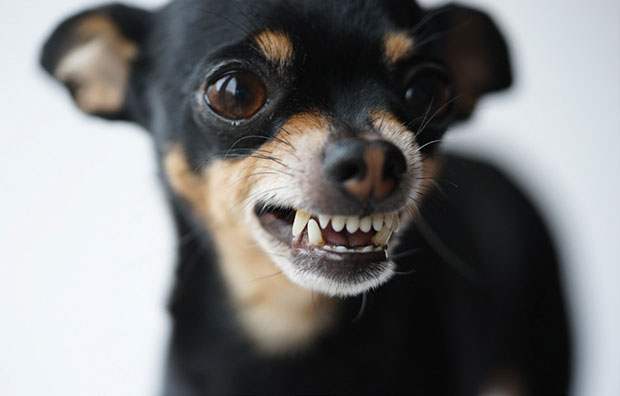 Approximately 4.5 million people are bitten by dogs in the United States each year, and more than 800,000 dog-bite victims require medical attention, according to the Centers for Disease Control and Prevention.

Dogs with unaddressed behavioral problems not only threaten public health but are more likely to be surrendered and euthanized.

To the untrained eye, a snarling or barking dog may be seen as overly threatening or aggressive when in fact the dog is behaving normally in the particular situation. As Dr. Overall explained, agonistic behaviors are complex social interactions that manifest as displays of dominance, submission, and reconciliation.

These behaviors can appear aggressive and include biting but are ultimately a normal part a dog’s behavioral repertoire.

“Maybe there are communication errors or uncertainty, or maybe a dog was behaving aggressively but reconsidered after obtaining more information from one of the participants,” Dr. Overall said. “Implicit here is one party makes a statement, the other party responds, and they go from there.”

Determining whether aggressive behaviors are normal or inappropriate is the context in which they occur. One example of normal aggression is a dog snarling when another dog in the household, after eating its own meal, tries to eat the meal that the snarling dog is eating. In contrast, abnormal or pathological aggression occurs out of context or over an extended period of time. It also manifests as an extreme overreaction given the situation.

“Inherent in these comparisons is that the response to a triggering circumstance is episodic in fear and fear aggression, but chronic in anxiety since the initial trigger is the underlying state itself,” Dr. Overall said.

Fearful dogs choose to withdraw. They want distance between themselves and whatever is scaring them. They’ll back off and lower every part of their body.  Anxious dogs, on the other hand, won’t retreat but must scan and monitor the situation. Their anxiety prevents them from interrupting what is happening in a given context.

Key to treating aggression is identifying the context and causes for the behavior. Before a dog becomes aggressive, there is first an arousal phase in which the dog reacts to negative stimuli. The arousal phase can occur quickly and is easily missed, Dr. Overall said.

“You don’t realize how fast it happens,” she said. “The window closes so quickly, maybe a tenth of a second. People say they tried to redirect the dog when it becomes aggressive, but it’s too late at that point.”

Clients can participate in their dog’s treatment by using a smartphone to make a recording of their pet that a veterinarian can review. “We want videos. We want to see what they do in their home environment. All the information is right there,” Dr. Overall said.

Four drug compounds are currently approved by the Food and Drug Administration to treat some forms of canine anxiety: clomipramine, fluoxetine, dexmedetomidine, and imepitoin.

Dr. Overall considers treatment with drugs as a complement to behavioral modification, which rewards positive behaviors and ignores unwanted behaviors.

“What we’re treating is mental illness,” Dr. Overall said. “My goal is to give my patients agency and control over their anxiety.”

National Dog Bite Prevention Week, sponsored by the AVMA, is being held this year from April 10-16. Get an AVMA member toolkit and publicly available resources.

A version of this article appears in the April 2022 print issue of JAVMA.