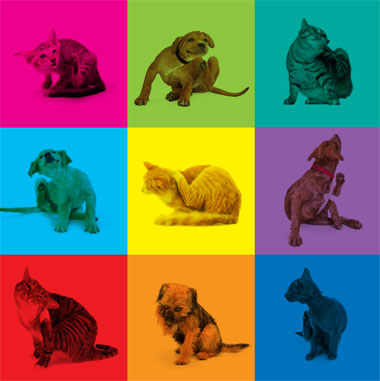 It’s hard to tell if there are more itchy dogs and cats than ever or if it just seems that way because more pet owners have realized that itchiness in pets is not the norm—and is treatable.

Fortunately, veterinary dermatologists say there are more treatments available than ever for itchy pets.

What’s complicated with dogs with allergies is it’s very similar to humans with atopic eczema, and they call it the atopic march. And essentially what that means is, every year is going to typically get more challenging for that patient, as the allergies get worse.

The most popular session at AVMA Convention 2019 was Dr. Lori Thompson’s talk “Itchy Felines: Is it Really a Fluoxetine Deficiency?” The title was meant to emphasize that itchiness in cats obviously has multiple causes. Also at the convention, Dr. Jackie Campbell presented two sessions on itchy pets: “Diagnostic Approach to the Pruritic Dog” and “Dermatology Toolbox: The Pruritic Pet.”

The Itchy Dog Project from 2017-19 at the University of Nottingham in England investigated potential causes of atopic dermatitis and skin allergies in dogs.

In Labrador Retrievers and Golden Retrievers, environmental risk factors for atopic dermatitis included being raised in an urban environment, being male, being neutered, receiving flea control, and being allowed on upholstered furniture. Protective factors included living with other dogs and walking in the woods, fields, or beaches.

Dr. Campbell, a veterinary dermatologist with Animal Allergy & Dermatology of Colorado, said itchiness in dogs can be very frustrating for their owners, and she believes the problem of pruritus is increasing.

Allergy is the most common cause of pruritus in dogs and can be particularly daunting because it is a lifelong condition. The tricky part is handling any secondary infections. If a dog develops an infection with every bad allergy flare and receives antimicrobials, the patient is set up for resistant bacteria. It is not uncommon in Dr. Campbell’s practice to have cases in which the only remaining option is a daily injectable antibiotic requiring weekly monitoring to ensure the kidneys are tolerating treatment.

“What’s complicated with dogs with allergies is it’s very similar to humans with atopic eczema, and they call it the atopic march,” Dr. Campbell said. “And essentially what that means is, every year is going to typically get more challenging for that patient,” as the allergies get worse.

Allergy shots are Dr. Campbell’s favorite way to manage young dogs with environmental allergies because about 70-75% of dogs will improve, with a reduction in the severity of clinical signs of 50% or more. Immunotherapy starts to work within four to six months but may take up to a year. The clinic teaches owners how to do the injections themselves. Dr. Campbell noted that immunotherapy costs for a 150-pound Great Dane are similar to those for a 5-pound Chihuahua, which is not true for other treatments.

Food allergies also can be a cause of pruritus in dogs. The other primary causes for dogs are parasites—notably fleas—and skin infections. Skin infections themselves can have a variety of underlying causes such as insufficient antimicrobial treatment, immunosuppression secondary to corticosteroid administration, and allergies.

At AVMA Convention 2019, Zoetis launched Itchy Pet Awareness Month to occur every August. The company has been campaigning in recent years to increase awareness among dog owners that itch in all its manifestations is not normal behavior. Instead, it is a reflection of a disease, said Dr. Andy Hillier, a veterinary dermatologist who is director of dermatology medical strategy for Zoetis Petcare.

According to data from Vetstreet Inc., a provider of marketing and communication services for veterinary practices, the number of dogs seen by veterinarians for itch increased almost 50% from 2013-18. Dr. Hillier thinks the data reflect an increase in the incidence of allergic disease, similar to the situation for humans, and an increase in dog owners bringing in dogs for treatment. He added that allergies are the underlying cause of most ear issues as well as the most common cause of skin infections in dogs.

Zoetis conducted a focused program of research and development 10 years ago on atopic dermatitis in dogs, Dr. Hillier said. The company was looking for treatments that would be effective and safe in the short and long term and that would meet owner needs. By studying the mechanisms of the disease, Zoetis learned how to target treatments toward specific irregularities in the immune system associated with allergic dermatitis.

Apoquel and Cytopoint target and neutralize the activity of allergy-related cytokines to provide relief for dogs with allergic and atopic dermatitis. Apoquel is a daily tablet, and Cytopoint is an injection given in the veterinary clinic that lasts four to six weeks.

Dr. Hillier said Apoquel has become the top-selling product in the U.S. animal health industry, according to data from the Executive Animal Health Study Center (CEESA) based in Belgium. He said Apoquel has surpassed the flea and tick preventives at different points during the last couple of years, the first time that a therapeutic agent has surpassed the flea and tick preventives that had dominated forever.

Dr. Thompson, a veterinary dermatologist with Animal Allergy & Dermatology Center of Indiana, doesn’t think the incidence of pruritus in cats is increasing. She thinks the ability of veterinarians to recognize the problem and the increased willingness of cat owners to seek treatment are at least partially responsible for the growing number of patients.

“The treatments we have to offer now are so much better than what we had 10 years ago,” she said. “It’s a better time to be a cat with skin disease than it was years ago.”

It’s a better time to be a cat with skin disease than it was years ago.

To treat allergies in cats, Dr. Thompson said, veterinarians have immunotherapy, cyclosporine, and better diets for food trials. Apoquel can be used to treat cats, even though it is only labeled for use in dogs. Topical medications from the isoxalaner class can be used to treat ectoparasites in cats, and there are antifungal medications formulated specifically to treat dermatophytosis in cats now.

As for psychogenic alopecia, Dr. Thompson said it is a diagnosis of exclusion, which may respond to behavior-modifying drugs such as fluoxetine.

Dusty, the clinic cat at Animal Allergy & Dermatology Center of Indiana, is the toughest allergic cat case that Dr. Thompson has ever managed. Dusty was a client’s cat for three years before becoming the clinic cat. Her owner tried everything that the clinic asked, but in the end, it was too much for the owner to manage, so the owner allowed the clinic to adopt her.

“She continues to be a challenge but is just the best girl ever,” Dr. Thompson said.