For most dogs with cancer, the diagnosis confirms what the unexplained weight loss or lump beneath the skin hinted at. At that point, when signs of disease are apparent, treatment is more difficult than if the cancer were caught sooner.

One of the latest veterinary diagnostic tools with potential to catch the leading killer of pet dogs is the liquid biopsy, or multicancer early detection test. The test screens for genetic biomarkers, such as DNA altered by cancer cells, in blood or other bodily fluids. As a screening test, an MCED test doesn’t diagnose cancer, but a positive finding suggests looking for the disease during the early stages when it may be more treatable. 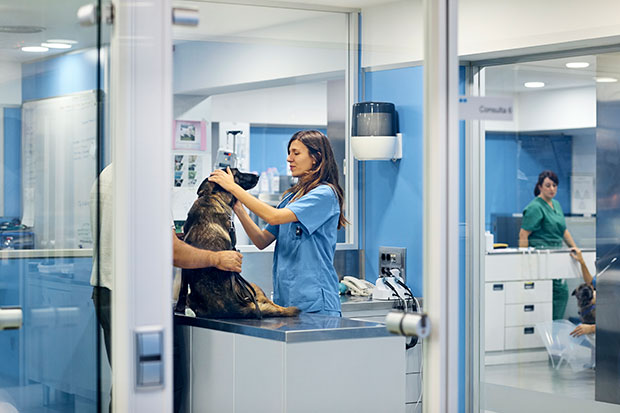 “With most cancers, the more cells you have to kill with chemotherapy or with radiation, or the larger the tumor, the more difficult it becomes, and the outcome is poorer,” said Dr. Kimberly Cronin, a board-certified veterinary radiologist working at a referral practice in Boston.

“Finding cancer early not only potentially makes treatment easier for a patient, it has a huge impact on the human-animal bond,” Dr. Cronin said. “When it comes to cancer, most of our clients want to treat their pets the same as they would a human—within limits, of course.”

In April, results of a clinical validation study of OncoK9, an MCED test for 30 types of canine cancer, were published in the online journal PLOS One. PetDx, the San Diego–based molecular diagnostics company that developed OncoK9, funded the CANcer Detection in Dogs—or CANDiD—study, involving 1,100 dogs of varying breeds, weights, and ages. The subjects were a mix of dogs diagnosed with cancer and dogs presumed to be cancer free.

“One thing we set out from the beginning to do as a company is bring evidence-based medicine into everything that we do, and this is the largest validation study ever performed in oncology diagnostics in veterinary medicine,” explained Dr. Andi Flory, a board-certified veterinary oncologist and chief medical officer at PetDx. Dr. Flory added that the PLOS One study she oversaw is meant to educate veterinarians uncertain about a kind of cancer screening test relatively new within the fields of veterinary and human medicine.

In addition to OncoK9, at least one other MCED test for dogs is currently available. Texas A&M University College of Veterinary Medicine & Biomedical Sciences offers the Nu.Q Vet Cancer Screening Test created by Volition, an Austin, Texas–based biotechnology company. Nu.Q tests blood for cancer biomarkers and claims a 97% specificity rate. The test has been shown to detect 77% of lymphomas and 82% of hemangiosarcomas.

Screening tests such as OncoK9 and Nu.Q would be most effective when used on an annual basis, particularly in older dogs and in those breeds prone to cancer, according to Dr. Cronin. One of the potential drawbacks is what happens if the screening test suggests cancer is present but the cancer can’t be diagnosed with follow-up standard diagnostics.

“Then you’re left with potentially taking a watch-and-wait approach, which is not something an owner would be comfortable with,” Dr. Cronin said.