Antimicrobial sales rise in 2018 but remain down over decade

Sales of antimicrobials for farm animals rose in 2018 following a sharp decline the prior year.

In 2017, the volumes, by weight, of antimicrobials sold for use in livestock reached their lowest point since Food and Drug Administration officials began collecting data in 2009. That resulted from a 33% drop from 2016-17 in sales of the antimicrobials that are in the same drug classes as those given to people—considered medically important by the agency. Sales of those drugs also declined the year before, for a two-year drop of 43%.

Sales of such medically important antimicrobials rose 9% in 2018 but remained the second-lowest sales total.

In December 2019, FDA officials published their 2018 annual report on the volumes of antimicrobials sold or distributed for use in food-producing animals. Agency officials said in a related announcement that, despite the one-year rise, overall trend data indicate antimicrobial stewardship efforts were reducing drug sales.

“While sales data do not necessarily reflect actual antimicrobial use, sales volume observed over time is a valuable indicator of market changes related to antimicrobial drug products intended for food-producing animals,” the announcement states.

Animal health needs and changes in animal populations are among influences on sales volumes, the announcement states. 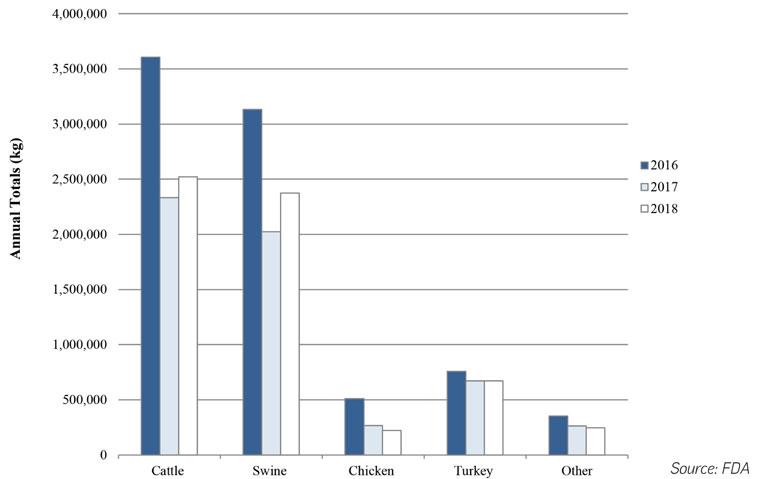 Dr. K. Fred Gingrich II, executive director of the American Association of Bovine Practitioners, noted that the data were for sales rather than use, and trying to identify why sales increased would be conjecture. He noted sales can vary with purchase patterns by feed mills and drug distributors, weather changes that affect rates of mastitis or bovine respiratory disease, swings in animal population sizes, and the combined weights of calf crops, among other factors.

Dr. Gingrich said he and other leaders at the AABP think the weight of antimicrobials sold is a poor measurement of use. Cattle veterinarians instead should follow stewardship guidelines.

Dr. Abbey Canon, communications director for the American Association of Swine Veterinarians, also noted the potential differences between sales data and use data. She also said the U.S. swine herd grows about 3% each year, and various diseases can challenge swine in a year, some of them requiring antimicrobial treatments.

FDA officials announced in December 2013 plans to phase out growth-promotion uses and other livestock production–based uses of antimicrobials that have been important for human medicine and administered to livestock in feed or water. The FDA gave drug companies three years, under threat of regulatory action, to agree to remove those production-based claims as well as remove over-the-counter access to those drugs.

The changes affected more than 90% of the volume of antimicrobials sold for use in livestock, according to FDA data. All affected drug companies agreed to the changes, which removed the production claims and added requirements for prescriptions or prescriptionlike veterinary feed directives.

In a Q&A document related to the sales report for 2018, FDA officials state that the data reflect the quantities of drugs that enter the market, not use of those drugs.

That Q&A document also indicates products shared between livestock and pets likely have little to no influence on the sales data in the report. Of the 121 products included in the report data, 12 are administered to companion animals, and 10 of them together accounted for only 2% of the sales volume.

The other two products are tetracycline antimicrobials that are administered infrequently to parrots, macaws, and cockatoos.

Changes coming in antimicrobial use, availability