Pig ear treats remain a source of Salmonella after decades of illnesses.

The most recent outbreaks linked with pig ears ended in October 2019 after at least 154 illnesses with 35 people hospitalized. Companies recalled treats imported from Argentina, Brazil, and Columbia.

Pig ear treats have been linked with illness outbreaks since at least 1999, when epidemiologists said the products likely sickened at least 30 people in Canada. U.S. authorities blocked entry of the implicated products. 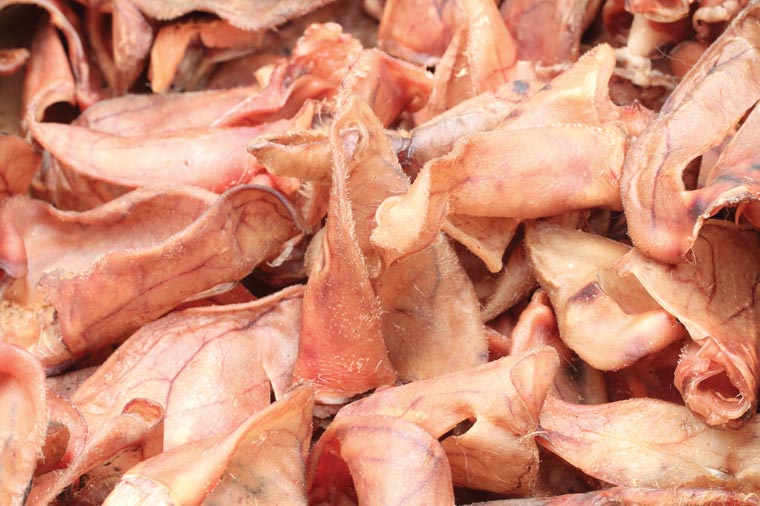 Through epidemiological investigations and product testing, Food and Drug Administration authorities since have expanded the list to include pig ear treats and similar products sold by 90 firms from 23 countries.

Dr. Colin Basler, who is a veterinary epidemiologist in the Foodborne Outbreak Response and Prevention Branch at the Centers for Disease Control and Prevention, said the CDC investigators who searched for the origins of the 2019 outbreak looked into where people buy pig ear treats, where they feed them to pets, and whether they wash their hands afterward. The results indicate more people should take precautions after handling the treats, he said.

“Some people might not realize that the things they feed their pets could be contaminated with Salmonella and that there are things they can do to reduce their risk of getting sick,” Dr. Basler said.

That includes storing human food away from all pet food, not just treats, Dr. Basler said. He noted that 50 people reported illnesses during a 2012 Salmonella enterica serotype Infantis outbreak linked with dry dog food produced at a plant in South Carolina, for example.

Pet food companies made changes to reduce Salmonella contamination since that outbreak, he said. But he has seen recent illnesses connected with raw pet foods contaminated with Salmonella, Escherichia coli, Campylobacter, and Listeria.

During the 2019 outbreak, some stores sold each pig ear treat in its own packaging. Others sold them in bins, with new ones added to old, Dr. Basler said.

“Salmonella can stick around in the environment for quite some time,” he said. “Being able to trace back for those bulk bin purchases was a bit more difficult because, if a store was getting pig ears from different sources, it was harder to identify how that bin may have been contaminated or even when that bin may have been contaminated with Salmonella.”

Tim Schell, PhD, director of the FDA Center for Veterinary Medicine Office of Surveillance and Compliance, said Salmonella contamination is possible in any slaughter facility. Pet treat makers likely reduced illnesses when they began irradiating pig ear treats following the 1999 outbreak in Canada, and CVM inspectors have seen little contamination in their monitoring since.

In the most recent outbreak, the contaminated products found in the U.S. indicate at least some companies making pig ear treats lacked sufficient pathogen controls, Dr. Schell said. FDA representatives reminded pig ear treat makers that they are responsible for the safety of their products, and agency officials are considering follow-up inspections to check pathogen controls.

Dr. Schell said the 2019 outbreak shows the connections between pet food safety, pet health, and human health and the need to control pathogens in pet foods.

In the June 1, 2011, issue of JAVMA, a scientific article on Salmonella contamination in pet foods, treats, and nutritional products indicates U.S. and Canadian pet owners bought more than 200 million pig ears each year despite reports that identified contamination with Salmonella (J Am Vet Med Assoc 2011;238:1430-1434).