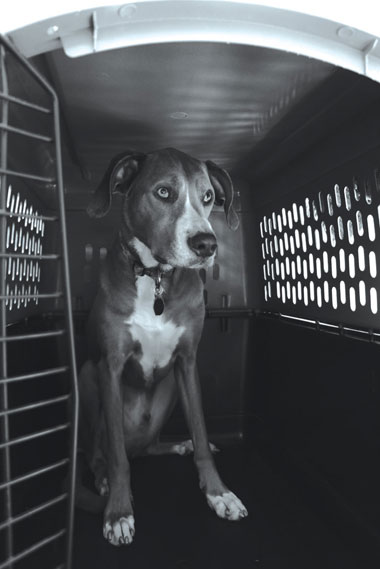 Dr. Beth S. Thompson learned in August that a rescue group was bringing Greyhounds to Minnesota from a meat market in China.

She is Minnesota’s state veterinarian and executive director of the Minnesota Board of Animal Health. An official with Missouri’s state government sent a message that a rescue group had arranged to ship the dogs to homes in Missouri but seemed to divert them to Minnesota at the last minute.

Dr. Thompson checked with Customs and Border Protection authorities for dogs arriving at the state’s airports. She also sought help from the Centers for Disease Control and Prevention, which checks incoming dogs for rabies vaccination. She was missing the rescue organization’s name, so she searched for Greyhound rescues in a listing of Minnesota-registered nonprofit organizations and looked for updates from those groups.

The dogs—four Greyhounds and a Whippet—should have been kept in quarantine at least 10 days so they could be watched for signs of illness, Dr. Thompson said. When contacted by her office, members of the rescue organization claimed ignorance of state rules to reduce disease risk.

“They thought, with the certificate that they had gotten from the veterinarian in China, they were good to go,” Dr. Thompson said. “So, it’s a matter of educating a lot of these people that are traveling.”

In addition to bringing viruses or bacteria that may be transmissible to other dogs, there is certainly a risk that the animals—any animal—could carry an infecting agent that could be passed to people or other animal species.

Veterinarians with state governments are concerned that dogs and their carriers could bring with them pathogens, especially the African swine fever virus responsible for killing whole pig herds in China and Eastern Europe.

Department of Agriculture authorities think the virus is unlikely to spread from imported dogs to pigs. Still, Dr. Lisa J. Becton, director of swine health information and research for the National Pork Board, warns that the ASF virus is hardy, and while dogs cannot be infected, she is concerned it could survive in bedding or on crates.

“Unlike other viruses that can desiccate and become nonviable relatively easily, African swine fever is, unfortunately, not one of those,” Dr. Becton said.

She described six Beagles from China that arrived unannounced this summer in a suburb of Raleigh, North Carolina, along with shipping crates, blankets, water, and food bowls. The dogs had been destined for a dog meat festival before a rescue group flew them from Beijing to Atlanta, then drove them hours northeast.

Dr. Douglas Meckes, state veterinarian for North Carolina, said his office might not have learned about the imports had the organizers not told news outlets. He ordered quarantines that held two of the dogs at a veterinary clinic and the rest at their foster homes, and state authorities gave the veterinary clinic protective suits for cleaning and disinfecting the clinic.

Dr. Becton said dogs at many meat markets can be exposed to blood, feces, and insanitary handling.

Looking healthy and other requirements

All dogs entering the country need to be at least 4 months old, CDC information states. Pets need to look healthy and may need rabies vaccine certificates, depending on the risk from the source country. Dogs from China, for example, need proof of rabies vaccination.

Under the Animal Welfare Act, dogs entering the U.S. for resale—which includes adoption—have to be at least 6 months old, in good health, and accompanied by a rabies vaccination certificate and an international health certificate that shows they are vaccinated against distemper, hepatitis, leptospirosis, and parvovirus and parainfluenza virus infection, according to information from the U.S. Department of Agriculture’s Animal and Plant Health Inspection Service.

Dr. Molly Katherine Houle, who completed an internship with the CDC team responsible for enforcing dog importation regulations, wrote an article on the CDC’s website about the 2017 discovery of hordes of puppies smuggled to John F. Kennedy International Airport in New York, the discovery of a 6-month-old Chihuahua with rabies, and the risks that young dogs in particular can spread tapeworms, roundworms, Giardia, methicillin-resistant Staphylococcus aureus skin infections, and canine brucellosis.

“In addition to bringing viruses or bacteria that may be transmissible to other dogs, there is certainly a risk that the animals—any animal—could carry an infecting agent that could be passed to people or other animal species,” Dr. Jacob said.

Researchers linked a 2015 canine influenza outbreak in Chicago with a strain that circulated in China and South Korea, according to information from Cornell University and the University of Wisconsin-Madison. Dr. Jacob said studies also have linked dog shows and breeder sales with domestic movement of canine influenza serogroups.

International health certificates arriving with dogs show that veterinary authorities are screening for sick animals that are likely to shed high amounts of an infectious pathogen.

“I think the challenge is those animals that are subclinical or asymptomatic—that aren’t overtly sick,” Dr. Jacob said.

Dr. Houle wrote that investigators determined some canine influenza outbreaks in the U.S. likely originated with rescue dogs, and some strains can develop into human health risks. In 2016, avian influenza spread from a cat to a person in a New York City animal shelter, the article states.

“Although the disease was mild, a more severe strain could emerge from the sick underage puppies imported into the United States,” she wrote. The article is available at the CDC website.

APHIS spokeswoman Joelle R. Hayden said agency authorities determined dogs from China’s meat markets pose a negligible risk of spreading ASF to the U.S. because of long-term security measures designed to protect against foot-and-mouth disease. When dogs arrive from China or other countries with FMD, inspectors at ports check dogs and their bedding for excess dirt, hay, straw, or other sub-stances that could carry disease.

Agency officials also recommend bathing dogs after arrival and keeping them away from livestock at least five days after arrival.

Dr. Dee is the lead author of a 2018 article that found the ASF virus, among other pathogens, survived in conditions that simulated overseas trips in feed, pet food, and sausage casings. He said the risk of infection rises if someone feeds backyard pigs any dog food left over from an overseas trip.

Through a newsletter and social media posts, members of Triangle Beagle Rescue indicated they brought the six Beagles to North Carolina in partnership with Rushton Dog Rescue, which is based in Somerset, U.K. At press time, neither group had responded to messages with questions about their importation processes.

Dr. Mike Neault, livestock director for the veterinary division of the North Carolina Department of Agriculture and Consumer Services, said division employees acted out of caution once they learned of the Beagles’ arrival. They made sure the bedding and food that came off the plane with the dogs went to a landfill. They cleaned, sanitized, and sun-dried the carriers from the trip, as well as incinerated all feces, trash, and papers.

Dr. Douglas Meckes wants more federal scrutiny of animals arriving in the U.S., and he worries about the animal importation that goes unnoticed. He and Dr. Neault said USDA officials at ports sometimes neglect to mention state requirements, and no state authorities saw the international health certificate information when the six Beagles arrived.

Dr. Beth S. Thompson said she would like to see a federal system to notify states when animals are arriving.

“Once the animals land in our states, we can actually address any concerns that the individual states may have,” Dr. Thompson said.

Health authorities could reduce the risk through quarantines when dogs arrive and follow-up evaluations before adoption or further travel, Dr. Jacob said. They could make use of better surveillance data, with detailed observations on each animal’s health and travel history, along with post–health certification monitoring for signs of illness.

As for potential fomites arriving with an animal, Dr. Jacob said countermeasures should depend on the organisms of concern. Some items could be disinfected, and others should be disposed.

Outbreak of canine influenza caused by new strain of virus