The hidden ecosystem of the gut microbiome 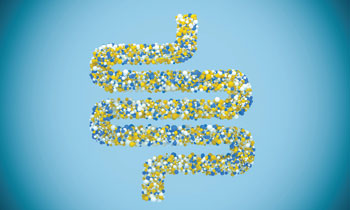 Millions of bacteria live in the gastrointestinal tract of animals, including cats, dogs, and humans. The Hill's Global Symposium: Harnessing the Power of the Gut Microbiome, July 14-15 in Toronto, explored the science of this hidden ecosystem and opportunities therein.

Human microbiome and beyond

The Human Microbiome Project through the National Institutes of Health has been developing data regarding the human microbiome for the past dozen years. Curtis Huttenhower, PhD, a professor of computational biology and bioinformatics at Harvard University, described his work with the project investigating the human gut microbiome in inflammatory bowel disease.

"A key understudied aspect of the companion animal microbiome is its potential as a diagnostic or prognostic biomarker," Dr. Huttenhower wrote in the symposium proceedings. "While better or more efficient diagnostics than microbiome profiling often exist for human disease, animals obviously possess a much narrower range of options for communicating distress or symptoms, and early detection of veterinary disease is severely limited."

Dr. Stanley Marks, a professor of small animal medicine at the University of California-Davis, spoke about interventions to modulate the gut microbiome in veterinary patients, focusing on probiotics and their limitations. He advised, "When selecting a probiotic, I can simply say this: Use probiotics that have undergone the most rigorous research that we are aware of."

Dr. Susan Little of Bytown Cat Hospital in Ottawa, Ontario, gave an overview of the treatment of cats with constipation. She wrote in the proceedings: "A promising approach for managing cats with constipation includes dietary pre- and probiotics. An imbalance in colonic microflora is thought to contribute to some chronic gastrointestinal disease in people." One pilot study found clinical improvement in cats that received a probiotic after having chronic constipation unresponsive to traditional treatments.

The gut and the brain interact in both directions, noted Dr. Caroline Mansfield, director of the U-Vet Werribee Animal Hospital at the University of Melbourne. She wrote: "It is apparent from interest in the medical field and pre-clinical experimental models that there is great potential for further investigation of manipulation of the gut-brain axis in veterinary medicine. Areas of interest include stress-associated diarrhea, cognitive and behavioural disorders, hepatic encephalopathy, and more idealistically, manipulation of the microbiome during the early development stage (i.e. postweaning to 1 year) to ensure a stable and functional GI microbiome."

The gut and the kidney also communicate in both directions. Studies have found altered intestinal microbiota with chronic kidney disease, wrote Dr. Jan Suchodolski of the Gastrointestinal Laboratory at Texas A&M University College of Veterinary Medicine & Biomedical Sciences. He concluded, "Further research is warranted to study the kidney-gut axis and how novel therapeutic approaches aimed at microbiota can potentially improve patient outcomes in CKD."

Dr. Joseph Bartges, a professor of medicine and nutrition at the University of Georgia College of Veterinary Medicine, spoke about the gut microbiome and obesity. He wrote, "Macronutrients influence the gut microbiome, which in turn alters digestion, energy metabolism, whole body metabolism, and immune response, all being important with obesity." He continued, "Species-specific studies are required to advance knowledge of the role of gut microbiome in canine and feline obesity."

Some of the other speakers at the symposium covered various other aspects of the gut microbiome, and a number of speakers discussed ways to communicate with clients about nutrition via social media and in person.

See the presentations from the Hill's Global Symposium: Harnessing the Power of the Gut Microbiome.