Dr. Maureen Luschini said the job market for criticalists was different when she finished her residency in 2010.

"It used to be easy to put an ad out and get multiple applicants for one position," she said. "But now, I could easily have a position posted for months and not get one person interested."

Her hospital currently has eight emergency veterinarians. But she wants to decrease shift lengths and increase overlap among her doctors. So she is looking for at least two more, maybe four. 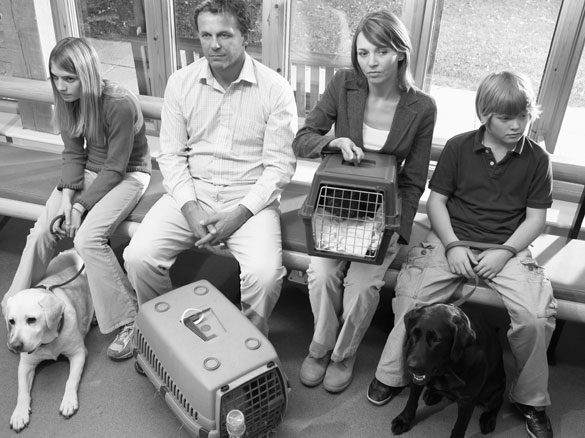 Dr. Luschini is the owner and medical director of the Veterinary Medical Center of Central New York in East Syracuse, New York. She's leading a task force to address a national shortage of emergency room veterinarians and veterinary technicians. The task force was created by the Veterinary Emergency and Critical Care Society and American College of Veterinary Emergency and Critical Care and is trying to quantify the severity of the problem and find ways to encourage more veterinarians to start or keep working in emergency rooms.

The shortage appears to be related to high overall demand for veterinarians, as companies and universities also have described difficult searches for specialists (see JAVMA, Oct. 15, 2018).

Dr. Gary L. Stamp, executive director of the VECCS, said U.S. veterinary hospitals are short of emergency veterinarians both with and without board certification as criticalists.

ER medicine is intimidating, Dr. Stamp said, and inexperienced veterinarians avoid it because of the risk they could be responsible for poor outcomes.

The veterinarians who take on emergency medicine also have higher burnout rates because of the hours, effects on personal lives, and challenging work, Dr. Stamp said. They get tired of missing holidays and their daughters' ballet recitals, he said.

Meanwhile, large specialty practices and practice chains are trying to expand their emergency services as they grow, he said.

Brian Mason is an emergency medicine recruiter for Blackwellking, which he said recruits for about 20 percent of U.S. veterinary hospitals and clinics. In December, the company had 165 listings for emergency veterinarian openings, including five jobs open at one hospital, he said.

From 2016 through 2018, managers at hundreds of hospitals told Mason they were unable to fill half their open jobs in emergency rooms, some for more than a year, he said. Blackwellking's data back up those conversations: only 175 of the 353 emergency veterinarian openings listed in that time were filled, he said.

Mason said those figures may underestimate demand because the company stops taking additional listings once it has a full workload.

Some hospitals are signing job contracts with second-year residents, who will be unable to start work for 18 months, he said.

AVMA economists reported in October 2018 that about 1.6 percent of veterinarians surveyed were seeking work (see JAVMA, Dec. 15, 2018). If those results remained accurate through the end of the year, when the AVMA estimated the U.S. had about 113,000 veterinarians, that would indicate 1,800 veterinarians were out of work.

In January, the AVMA Veterinary Career Center alone listed about 2,200 jobs for veterinarians, including hundreds for emergency veterinarians.

Dr. Jimmy Barr is chief medical officer of BluePearl Veterinary Partners and an emergency and critical care specialist. He described the lack of emergency veterinarians as a crisis that could endanger the ability to treat pets.

The veterinarians and veterinary technicians in emergency rooms are so passionate that they are working harder to take care of pets, he said. He thinks it's rare that a shortage would have a demonstrable effect on patient care, but waiting times can rise. Clients may decide against waiting hours in favor of seeing their regular veterinarian later.

It used to be easy to put an ad out and get multiple applicants for one position. But now, I could easily have a position posted for months and not get one person interested.

BluePearl has 337 emergency veterinarians, and almost all of the company's 70 veterinary hospitals have emergency rooms. Company spokesman Curtis Krueger said the company recently examined emergency consultation figures at six hospitals in Florida, Illinois, and Tennessee. It found that, over five years, each facility had at least a 38 percent increase in emergency cases. The volume at one hospital doubled.

Data in the AVMA Pet Ownership and Demographics Sourcebook, published in November, indicate the population of emergency and critical care veterinarians is rising faster than pet populations. That increase doesn't seem to be keeping up with demand, however.

Dr. Stamp knows of veterinary hospitals that cut emergency hours for lack of staff, some in communities that had just gained 24-hour care.

While no national figures exist, Mason said the shortage is most severe in smaller towns, where hospitals are unable to offer a $150,000 salary available at specialty hospitals in areas such as Los Angeles, Miami, and Chicago. When a small-town hospital offers a high salary, Mason said, its managers risk hard feelings if existing staff find out.

In comparison with general practice, emergency rooms also have worse shortages of veterinary technicians, Dr. Barr said. In multispecialty practices, registered and senior veterinary technicians receive more desirable schedules, so the people who have more training and seniority move into internal medicine and away from overnight shifts.

Even as demand for emergency veterinarians grows, high caseloads and compassion fatigue are increasing burnout among existing emergency veterinarians, Dr. Luschini said. They feel unable to do their best work for so many animals, sometimes with insufficient support staff, difficult schedules, and too little compensation, she said.

"We are looking at developing an advanced certification for ER doctors as well as establishing a structured mentoring program for new graduates entering the field," she said. "And that immersion program is particularly for students that do not want to go on and do an internship but rather go right into emergency medicine."

Dr. Barr said recruiting emergency veterinarians is inherently difficult, because those who want to work nights and weekends—when veterinary ERs are busiest—are the exceptions.

Human medicine has had cyclical shortages of emergency room doctors, but Dr. Barr thinks physician organizations have found creative responses. In addition to increasing compensation, he said, companies in human medicine also have made efforts to improve wellness through paid subscriptions to services such as food deliveries and dry cleaning.

We are looking at developing an advanced certification for ER doctors as well as establishing a structured mentoring program for new graduates entering the field. And that immersion program is particularly for students that do not want to go on and do an internship but rather go right into emergency medicine.

Dr. Barr said that, industrywide, veterinary companies are considering ways to improve the lives of emergency veterinarians. They also are trying to give veterinarians the skills needed to excel in the job.

Dr. Stamp said the annual International Veterinary Emergency and Critical Care Symposium has grown from about 2,000 attendees eight years ago to 3,400 today. Most of that growth is among newer veterinarians and veterinary technicians who want training.

The symposium organizers also are working with corporate practice chains, including BluePearl and VCA, to help them recruit emergency doctors, Dr. Stamp said. More than 1,000 of the meeting attendees also went to the meeting's job fair.

Dr. Stamp estimates demand for emergency veterinarians has increased more than 30 percent over the past five years, judging by the number of subscriptions to the VECCS job board and attendance at the annual meeting. The association's membership also has risen about 25 percent over the past three years, to around 5,800.

The VECCS and ACVECC task force planned to send surveys in January with questions on emergency veterinarians' pay, shifts, hours, patient volumes, and opinions on whether those numbers are fitting, Dr. Luschini said. The task force members want to learn about quality of life and compassion fatigue as well as learn whether emergency veterinarians would support the advanced certification and training programs.

"This does warrant attention, and ACVECC and VECCS are working jointly to be able to investigate this and figure out solutions together to best protect emergency medicine as a viable career option and a fulfilling career option for veterinarians," she said.