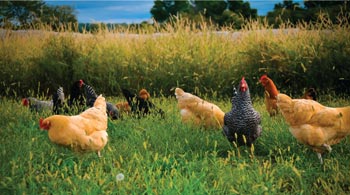 Dr. Huddleston is director of avian, swine, and aquatic animal health for the Veterinary Services branch of the USDA Animal and Plant Health Inspection Service. He hopes an agency campaign started in November will encourage vigilance against infectious disease.

The Defend the Flock program gives tools such as checklists for disinfection and reducing fomite risks from guests, lessons on the concept of biosecurity, and guidance on managing wildlife that could carry disease.

Dr. Huddleston said the program combines and updates two campaigns for biosecurity in backyards and on farms. APHIS started the previous campaigns after the 2002-03 outbreak of exotic Newcastle disease among backyard flocks in California and the 2014-15 outbreak of highly pathogenic avian influenza that killed about 50 million chickens and turkeys in U.S. barns.

Dr. Huddleston said the shared messages of the new campaign could help build a sense of community and encourage shared responsibility for disease control.

"Together, we can improve our ability to promote biosecurity and protect avian health in all flocks across the country," he said.

The USDA published the campaign materials ahead of the typical influenza season, and the campaign also arrived during a response to an outbreak of virulent Newcastle disease among backyard flocks in California. The Newcastle outbreak started in May 2018 and, by the end of November, spread to birds at 185 sites in four southern California counties.