AVMA may change guidance for CO2 euthanasia in rodents 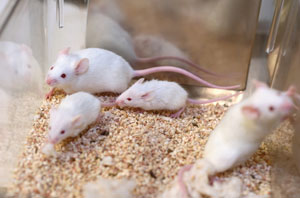 Pending revisions to the AVMA's euthanasia guidelines likely will instruct veterinarians to use faster flow rates when using carbon dioxide to euthanize rodents.

The existing AVMA Guidelines for the Euthanasia of Animals state that veterinarians who use euthanasia chambers should place the rodents inside before displacing the air with carbon dioxide and use flow rates that displace 10 to 30 percent of the container volume each minute. Draft updates would shift the range to 30 to 70 percent per minute, according to Dr. Samuel Cartner, who represented laboratory animal veterinarians on the AVMA Panel on Euthanasia.

He described the proposed changes during the AVMA Humane Endings Symposium, Nov. 2-4, 2018, in the Chicago suburb of Rosemont, Illinois (see story).

Dr. Cartner said in an interview after the meeting that the euthanasia guidelines had contained the 10 to 30 percent flow rate recommendation since the mid-1980s. But the 2013 edition increased the emphasis on that recommendation, drawing increased attention.

The 2013 edition states that breathing carbon dioxide concentrations of 7.5 percent increases an animal's pain threshold, and concentrations higher than 30 percent cause deep anesthesia and death. But high concentrations can cause burning in the lungs and eyes and feelings of breathlessness, and fear, so the 2013 edition continued to recommend the lower flow rate.