The heated topic of raw milk 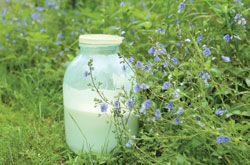 What could be more wholesome than chocolate milk from an Amish farm?

In November 2015, the International Raw Milk Symposium in Anaheim, California, brought in unpasteurized chocolate milk from an Amish farm in Pennsylvania. The sale of raw milk is legal in California and Pennsylvania, but the interstate sale of raw milk is illegal. Authorities embargoed the chocolate milk and sent a sample to the Food and Drug Administration—turning up Listeria.

An investigation by the Centers for Disease Control and Prevention and state health departments found that Listeria isolates from the milk seized at the symposium were related to isolates obtained from two people in 2014. One person in California had been hospitalized and the other, a cancer patient in Florida, had died.

The investigation revealed some of the risks of raw milk and some of the complexities of buyers' clubs, which can be so secretive as to involve drop points and burner phones for temporary use. The AVMA supports laws requiring pasteurization of all milk, but unpasteurized milk has a devoted following despite the safety concerns and varying legality among states.

For fans, raw milk is bucolic and natural. At All Grass Farms outside Chicago, cows and calves munch on a pasture of grass, clover, and blue-flowered chicory. Customers come to the farm store to buy various products, including raw milk at $6 per half-gallon.

The farm owner is a convert himself to unpasteurized milk, which many people believe to taste better and provide health benefits; he argues that people should be able to weigh the risks and benefits for themselves. Two speakers at AVMA Convention 2018 this past July in Denver also took a look at the heated topic.

The AVMA Board of Directors approved the latest revisions to the AVMA policy "Raw Milk" in November 2016 on a recommendation from the AVMA Food Safety Advisory Committee. According to background materials, the purpose of the revisions was "to strengthen the language and more clearly convey the AVMA's thinking regarding sale, distribution, and labeling of raw milk and raw milk products."

The AVMA opposes the direct sale or distribution to the consumer of unpasteurized milk or other unpasteurized dairy products. In those states where the sale of such is allowed, those products should be labeled "Not Pasteurized and May Contain Organisms that cause Human Disease." Furthermore, the AVMA supports laws requiring pasteurization of all milk to be sold within a state and consumed as fluid milk or to be used in the manufacture of dairy products.

Healthy mammals can shed organisms in their milk that are pathogenic to human beings and may cause diseases such as brucellosis, campylobacteriosis, coxiellosis, cryptosporidiosis, listeriosis, salmonellosis, tuberculosis, and E coli O157:H7 infection. Secondly, pathogenic agents may be introduced during milk handling; therefore, only pasteurized milk and milk products should be sold.

Cliff McConville, owner of All Grass Farms in Dundee, Illinois, worked in downtown Chicago for 20 years in the insurance business. He began farming on a small scale in 2011 when he started working from home. He kept chickens, pigs, and beef cattle on 8 1/2 acres. People who learned that he kept cattle asked if he sold raw milk.

He bought two Guernsey cows in 2012 to sell raw milk, and he had so much demand that he bought two more Guernsey cows a week later. He leased land in 2015 to establish All Grass Farms. The farm has about two dozen Guernsey cows at a time along with chickens, turkeys, pigs, and beef cattle as well as vegetable and herb gardens.

McConville thinks the growing demand for raw milk ties into the whole movement by consumers who want to know where and how food animals are raised, with concerns ranging from animal welfare to what the animals eat.

But state laws on raw milk are a patchwork. Some states prohibit the sale of raw milk. Other states allow retail sale, on-farm sales, herd shares, or sales of raw milk ostensibly as food for animals.

When McConville started out, the Illinois government was developing regulations for raw milk, and he got involved. As of 2016, permit holders in Illinois may sell raw milk on the farm where the cows are located. The farm must pass an initial inspection, and milk samples must pass initial and ongoing testing. McConville said the keys are to make sure the cows are clean and healthy and the milking equipment is clean.

McConville developed a taste for raw milk, and now he drinks it every day. He said the breed and diet of his cows affect the flavor of his milk, but he also believes pasteurization affects the flavor of milk. Among health benefits, advocates believe raw milk can improve digestion and strengthen the immune system.

"Clearly, it's a little bit riskier, just like if you're eating a raw vegetable versus a cooked vegetable or raw meat versus cooked meat," McConville said. "It's a little riskier, but there's benefits to it."

McConville pointed to a 2015 study and a 2011 study in the Journal of Allergy and Clinical Immunology: "Consumption of unprocessed cow's milk protects infants from common respiratory infections" (J Allergy Clin Immunol 2015;135:56-62) and "The protective effect of farm milk consumption on childhood asthma and atopy: the GABRIELA study" (J Allergy Clin Immunol 2011;128:766-773). He also pointed to a 2007 study in Clinical and Experimental Allergy, "Inverse association of farm milk consumption with asthma and allergy in rural and suburban populations across Europe" (Clin Exp Allergy 2007;37:661-70).

If farms can't provide raw milk legally, McConville continued, customers will buy it from somewhere illegally. In his mind, that's a bigger risk.

Buyers' clubs for raw milk may require members to sign a contract that can include agreeing not to talk to the government and not to share information outside the club—and agreeing that it is the member's responsibility if he or she develops an illness. Instead of raw milk–associated outbreaks occurring in single states, now they are more widely distributed, sometimes only detected by laboratory surveillance, said Dr. Megin Nichols, a CDC veterinarian, who presented "Multistate Outbreak of Listeriosis Linked to Interstate Shipment of Raw Milk" at AVMA Convention 2018.

More states have been allowing raw milk, too. The United States had 30 outbreaks linked to raw milk from 2007-09, increasing to 51 outbreaks from 2010-12. So why drink raw milk?

Advocates say raw milk is creamier, but creaminess relates to homogenization rather than pasteurization. Dr. Nichols said pasteurization does not substantially change lactose content. The 2011 study finding that consumption of raw milk was inversely associated with asthma and allergy was in rural areas, where the setting might have had an effect. The concentration of estrogenic hormones in milk has to do with the pregnancy status of the cow, not with pasteurization. The amount of vitamins and nutrients in pasteurized milk does not significantly differ from the amounts in raw milk.

Dr. Nichols said there is a misperception that the risk of infection and the outbreak rates for pasteurized and raw milk are similar or are lower for raw milk, but many more people drink pasteurized milk, so more outbreaks are associated with pasteurized milk. Current estimates are that 3.5 percent of the U.S. population drinks raw milk.

No scientific evidence supports the claim that the benefits of consuming raw milk outweigh the risks, Dr. Nichols said, noting, "We do need some additional studies, especially around biologic mechanisms that might reduce allergies."

In the investigation that Dr. Nichols highlighted, the Listeria isolates from the ill people had indistinguishable pulsed-field gel electrophoresis patterns and were highly related by whole genome sequencing to isolates from the sample of raw chocolate milk produced by the Amish farm in Pennsylvania. Dr. Nichols said the farm was part of a very complex online business, working with outside help, yet did not have a phone at all.

Officials eventually managed to talk with the farmer, explaining that there was an outbreak and could be ongoing contamination. The CDC issued an announcement about the outbreak in March 2016 and closed the investigation in December 2016 after no additional people were reported to be infected with the outbreak strain.

Dr. Danelle Bickett-Weddle of the Iowa State University Center for Food Security and Public Health says it is becoming more common for people to think that pasteurization destroys the health benefits of milk.

Pasteurization does destroy some enzymes in milk, but the enzymes in milk do not contribute to digestion in the human stomach, Dr. Bickett-Weddle said during her presentation, "Raw Milk: It Doesn't Do a Body Good ... ," at AVMA Convention 2018. She showed a slide with a list of pathogens that can be found in raw milk, and she showed a blank slide as a list of the pathogens associated with pasteurized milk—noting that pasteurized milk can be contaminated after pasteurization. The CDC estimates that raw milk is 150 times as likely to cause illness as pasteurized milk.

Of the 81 raw milk–related outbreaks from 2007-12, 81 percent were from Campylobacter contamination. In 2017, two outbreaks were traced back to the Brucella abortus vaccine strain RB51.

"We are a food-rich nation. We are allowed financially to make decisions that other countries would dream to do," Dr. Bickett-Weddle said. "I try to have these conversations with people any chance I get about what the risks are. Some of them you'll never convince, even with the science."