The corporatization of veterinary medicine

Like many veterinarians, Dr. Colleen Currigan wanted to be her own boss.

"From the day I graduated from veterinary school, my hope was that I might someday own my own feline practice," she recalled.

After receiving her veterinary degree in 1985 from The Ohio State University, Dr. Currigan spent the next several years making her dream a reality, first as an associate with a feline-exclusive practice in Chicago, then as a house-call practitioner. At last, in 1998, she opened the Cat Hospital of Chicago in a strip mall on the city's North Side.

Dr. Currigan grew her practice into a thriving business with three associate veterinarians and bringing in more than $1 million in revenue annually.

By 2014, Dr. Currigan had begun thinking about her "exit plan," even though she expected any such exit to be years down the road. She and one of her associates discussed forming a partnership, with the associate eventually buying out Dr. Currigan's share of the clinic. It was not to be, however; and in November of the following year, Dr. Currigan sold the Cat Hospital of Chicago to Companion Animal Practices North America, which owns more than 80 companion animal hospitals nationwide.

She remained with the practice, first as an associate veterinarian and now as hospital director. Overall, the experience has been "very positive," said Dr. Currigan. "Although I certainly cannot speak for all corporate groups, I can say that CAPNA has been very supportive of its hospitals and of ongoing continuing education and personal development for its veterinarians as well as its hospital team members," she said. 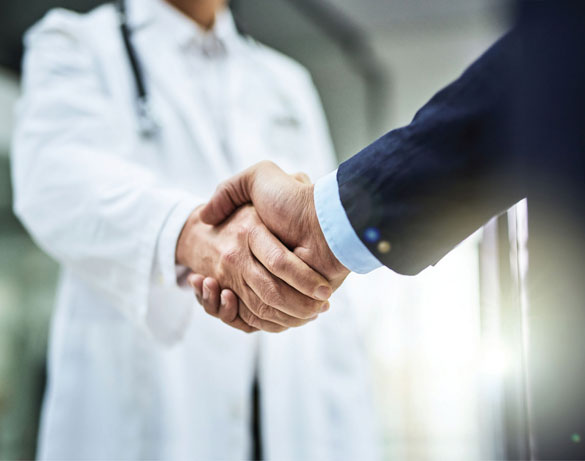 Once upon a time

Corporate-owned veterinary practices have been around for roughly 30 years, ever since VCA Animal Hospitals acquired its first independently owned companion animal clinic in 1987. Currently, VCA operates over 800 clinics throughout North America.

The success of VCA led to the formation of several national and regional chains, such as Banfield Pet Hospital, BluePearl, and Heartland Veterinary Partners. Analysts put the number of corporate veterinary practice groups at now just over 40. Private equity firms, which see companion animal practice as a relatively safe investment offering respectable returns, are funding many of the acquisitions by corporate groups.

Depending on the source, the number of veterinary practices in the U.S. ranges from 28,000 to 32,000, according to the 2017 AVMA Report on the Market for Veterinary Services. Brakke Consulting tracks corporate purchases of veterinary clinics and estimates that about 3,500 are company-owned. John Volk, an analyst with Brakke, says corporations own about 10 percent of general companion animal practices and 40 to 50 percent of referral practices.

What's occurring in veterinary medicine is a common business strategy applied to many industries made up of multiple, small, independently owned companies. "It's called roll up," Volk explained. "What happens is a larger company comes in and buys up the smaller companies and builds a bigger firm."

Banfield, VCA, and the rest don't purchase just any practice, says Volk. What they look for is a multiveterinarian business generating at least $1.2 million annually. "Over the years, what companies have found is that if they buy small practices or fixer-uppers, they don't do very well with them," he said. "And less than half of independent veterinary practices fit that category."

Corporations aren't purchasing then closing practices as a tactic to drive out competition, added Volk.

Within recent years, Mars Inc. has emerged as the top corporate owner of veterinary practices. The privately held company known for M&Ms as well as Pedigree, Iams, and Nutro pet foods has dramatically grown its Petcare subsidiary with acquisitions such as Banfield, BluePearl, Pet Partners, and most recently VCA, purchased for $9.1 billion in September 2017.

Marta Monetti, vice president of Mars Veterinary Health, said the company owns more than 2,000 veterinary hospitals in the United States and Europe, and employs over 50,000 veterinary professionals, making it the world's largest practice owner and employer of veterinarians.

"Pet care has been an important part of Mars for more than 80 years, and our growing veterinary business represents Mars Petcare's entry into veterinary care on a global scale to deliver on our purpose: a better world for pets," said Monetti.

During an appearance at Banfield's Pet Healthcare Industry Summit this past September, Pamela Mars, an heir to the family's candy and pet food fortune and its Petcare division ambassador, described Mars as a family-owned company that followed its passion for pets into the veterinary market in 1994. She and her three sisters each inherited an estimated 8 percent stake in Mars when their father, Forrest Mars Jr., died in 2016.

"We got into this business because we love pets," not for financial gain, said Mars, who owns three Maine Coon cats and whose net worth is estimated at $6.2 billion. "My view is—and my family shares this—from the minute you get your pet you want that pet to live as long of a healthy, productive, pain-free, wonderful life as possible."

With that in mind, the company's involvement in the delivery of veterinary care is for "the long haul," which she acknowledged could be good or bad depending on a person's perspective.

"If you don't like us, bummer, you're stuck with us for a long time. If you like us and think we can make change, we're willing to work with others to make that happen," Mars said.

Later, she added that the company is willing to work with anyone to make veterinary care affordable for everyone. "Shouldn't everybody be able to have a pet in their life if that's what they want to do?" she asked.

What's it all mean?

The question is how the corporate presence will affect veterinary medicine. It's not just veterinarians asking, either. From software manufacturers to practice management companies, businesses that market to the animal health industry want to know what it means to their bottom line.

We need to gather more and better information on corporate practices, but it's difficult.

The short answer is no one truly knows.

"As a profession, we're behind in our understanding of some of these trends because it's been happening faster than anyone anticipated," said Matthew Salois, PhD, director of the AVMA Veterinary Economics Division.

Dr. Salois says the AVMA has a much greater understanding about the economies of independently owned veterinary hospitals than it did prior to the division's creation in 2011. The same can't be said for corporate-owned practices.

"We need to gather more and better information on corporate practices, but it's difficult," said Dr. Salois. "We can survey private practices because they are AVMA members, but corporate entities are more protective of their data."

The sudden, intense interest in practice consolidation; the growth of large group practices; and the evolving role of the small practice are, according to Dr. Salois, an opportunity for the AVMA to better understand these trends and educate the profession. "By building more partnerships and continuously improving our data and resources across all practice types, we can position ourselves to better address these questions," he said.

From seller's remorse to client rage, anecdotes about the downside of corporate ownership abound. Yet there is no evidence that corporate-owned veterinary practices are inherently worse—or better, for that matter—than independently owned practices in terms of efficiency, patient care, staff salary and benefits, or client satisfaction. Many corporate practices have been in business long enough that, by now, institutional deficiencies in these areas would be apparent.

I don't see how corporates can ever own the veterinary profession in the same way the pharmacy profession is essentially owned.

"Corporate practices have obviously got enough clients that they're surviving," said Dr. Karen Felsted, president of Felsted Veterinary Consultants Inc. "You hear all the complaints, but clearly the corporates aren't so bad that they're driving all the clients back to independently owned practices."

Changes in practice culture are another question. Dr. Currigan says selling the Cat Practice of Chicago to CAPNA was a positive experience but not without the "lumps and bumps" that accompany any transition. "I can honestly say clients haven't noticed any differences, even nearly three years out," she said. "We are still the same team, with the same cat-friendly practice culture that we've always been."

Given the small number of veterinary practices that corporations are interested in purchasing, Dr. Felsted isn't worried that independently owned clinics will one day be a minority. "I don't see how corporates can ever own the veterinary profession in the same way that the pharmacy profession is essentially owned—unless somebody can figure out how to do something with the small one-doctor practices," she said. "There's still going to be a tiny practice in Timbuktu, Texas, that a corporate group doesn't want to buy."

The traditional model for veterinary practice acquisition is the owner sells to an associate veterinarian, likely groomed to one day take the reins, or to a veterinarian not employed by the clinic. That is no longer the case for select companion animal and referral practices. Those fortunate owners find themselves in a seller's market where companies are willing to pay top dollar for a thriving practice.

"Some veterinarians have made a fortune out of their practices, making probably two and three times what they would have historically gotten, so for them it's been fantastic," said Dr. Felsted.

But not everyone benefits. "If you're a younger veterinarian wanting to buy one of these high-earning practices, it's incredibly hard to do these days," she explained, "because either they're already bought up by corporates or the owner wants to sell at a corporate price, and a younger veterinarian can't get financing for that."

Volk says the traditional model is more common than a corporate buyout. He encourages associate veterinarians to become practice owners and tells them there are a lot of practices available—smaller clinics that corporations aren't interested in or independently owned practices with owners who simply won't sell to a corporation. "They prefer to keep the practice independent and sell to an associate or multiple associates that have been involved in the practice for a number of years," Volk said.

Dr. Currigan recommends owners begin thinking about selling their practices 10-15 years ahead of time. "Research all of your options: corporate sale, associate buy-in, noncorporate sale, merger with another practice, and so on," she advised.

"I never in a million years dreamed I would ever sell to a corporate group," Dr. Currigan continued. "But for me, in the end, after months of due diligence, I realized it was the right decision and the best fit for my future and the future of Cat Hospital of Chicago and its team."

Malinda Larkin contributed to this story.

Correction: An earlier version of this article incorrectly stated the number of veterinarians Mars Inc. employs.