"I love the PALS model," said Staci Columbo Alonso about the People and Animals Living Safely shelter program (see story). "Where there is an option to build a from-the-ground-up joint facility, I hope this model is used. With only 3 percent of domestic violence shelters in the U.S. offering pet services of any type, I think that there's room for every level of service that addresses the need for pets to be included in the (domestic violence) escape plan."

Alonso is founder and board president of Noah's Animal House in Nevada, a shelter for pets of domestic violence victims staying in the adjacent The Shade Tree Shelter for women and children in Las Vegas, a separate nonprofit. Noah's was founded in 2007 to house and care for the pets of their clients.

The model has worked well, and in February, Noah's opened a second shelter in Reno. Its partner shelter, the Domestic Violence Resource Center, serves both women and men.

Alonso said the ratio of kennels in Las Vegas Noah's to beds in Shade Tree is 1:10. Three hundred sixty beds are available, and the 36 kennels are usually full or nearly full. She recommends 10 to 15 percent as many kennels as beds.

"Our building is pretty unique to what's available in the U.S. because it's a stand-alone building," Alonso said. Families can spend time with their pet in one of two living rooms, or "cuddle rooms," or an enclosed outdoor space. Reno is similar; only some of the layout was modified. Cats stay in individual condos. "Cats love the sun, so both buildings were built so the morning sun comes into the cat room. The dogs have indoor-outdoor runs, for cleaning and fresh air and providing an atmosphere that's close to home," she said.

The average stay at the shelters is six weeks, though the final transitional stage can be as long as a year.

Noah's manager is a licensed veterinary technician who conducts behavioral assessments and administers vaccinations. A veterinarian is under contract to come on-site for any basic medical treatment. Pets needing more intense medical attention are transported to a local veterinary hospital that discounts its fees for Noah's.

Alonso said: "Veterinarians play such an important role in our existence. One of the most meaningful places for the veterinarian and medical (staff) is helping identify an abusive environment while it's still happening. It's a hard line to cross, but … where there is pet abuse, in most cases, there is human abuse in the home, and vice versa."

Everything is privately funded by businesses and individual donors. A groomer donates time, but Alonso said that part of the healing process and gaining self-sufficiency involves the families taking daily responsibility for their pet.

"I really believe that is the emotional power and healing that the pet provides to give you the strength and courage to keep moving forward and change," she said. 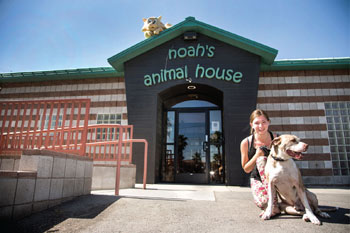 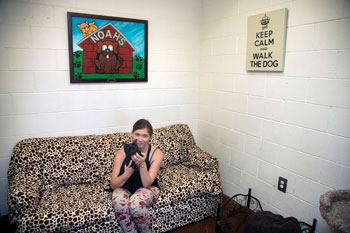 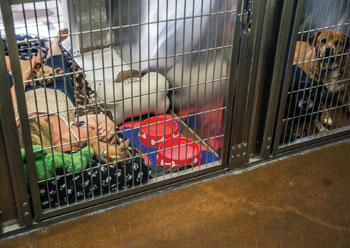