Finding a future for osteosarcoma patients

The first dog, Hessa, had chondrosarcoma. She was not a candidate for surgery, and the tumor was quite aggressive.

The second and third dogs, Roddy and Maxine, had osteosarcoma. Both had amputations. Roddy started chemotherapy but developed lung metastases and a malignant pleural effusion several months into the treatment. Maxine did not have chemotherapy and developed spinal metastases three months after the amputation.

Roddy was the catalyst for Dr. Cilursu to start an online support group that led to formation of a small nonprofit, Bone Cancer Dogs Inc., focusing on osteosarcoma research and awareness.

According to Dr. Sue Ettinger, a veterinary oncologist, osteosarcoma is the most common primary bone cancer in dogs and is both locally aggressive and highly metastatic. A 2017 report from the insurance company Nationwide states, "Osteosarcoma diagnoses are significantly more common among the largest dogs, a trend more pronounced in a number of extra-large breeds."

The AVMA Animal Health Studies Database lists a number of osteosarcoma studies. In 2015, Morris Animal Foundation launched its multimillion-dollar Osteosarcoma Initiative to better understand and develop novel drugs for metastatic disease. One forthcoming treatment is a vaccine that could be available soon from Aratana Therapeutics (see related story).

Dr. Chand Khanna, a veterinary oncologist, studied osteosarcoma in dogs and children at the National Cancer Institute. He said there are probably 1,000 new cases per year in children in the United States and more than 10,000 cases—some would say 100,000—in dogs. Thus, osteosarcoma in dogs is of great interest in comparative medicine.

Dr. Ettinger is currently at the Veterinary Cancer Center in Norwalk, Connecticut. She presented the session "Osteosarcoma Survival Guide" at AVMA Convention 2017 this past July in Indianapolis.

She started by describing a favorite patient, Seamus the Greyhound. At age 9, osteosarcoma was diagnosed in the distal end of his left radius. He had an amputation and additional treatment, going on to become an ambassador in that center's reception room.

The two battlefronts in osteosarcoma are the tumor and then the systemic disease. Most dogs die of the cancer spreading to the lungs. About 90 percent die within a year with amputation alone as treatment.

About 75 percent of osteosarcoma is appendicular, and 25 percent is axial. According to Dr. Ettinger's convention notes, "It typically occurs in the metaphyseal region of long bones, towards the knee and away from the elbow."

What do veterinarians see with osteosarcoma? Pain, lameness, and swelling. Dr. Ettinger said, "If you have a large or giant-breed dog that is lame and has swelling over one of the locations towards the knee, away from the elbow, plus the hock, any of those locations, I think you should be doing X-rays that day."

She sees a lot of dogs that have a prolonged time to diagnosis because they did a little better on pain medication. Radiographs of the suspicious site could show cancer destroying bone or making new bone.

The decision to amputate is one of the worst that owners must make, Dr. Ettinger said, but most dogs adapt well after amputation.

Seamus had a standard case of high-grade osteosarcoma at the beginning but not in the long term. He had his amputation in October 2013, followed by six doses of carboplatin.

Later, he developed a mass on the left lateral aspect of the thorax that turned out to be a soft-tissue sarcoma. The mass was removed in January 2013, and he started oral metronomic chemotherapy in March 2014. In September 2015, he had a lytic lesion involving the left fifth rib, a low-grade osteosarcoma. It was removed in October 2015, and he went back on chemotherapy.

He was still alive as of this writing in October 2017.

The insurance company Nationwide released the report "Osteosarcoma: prevalence and influences" at AVMA Convention 2016 in San Antonio. The analysis of Nationwide's pet insurance claims revealed trends in the prevalence of osteosarcoma in dogs in the United States by size, breed, and other factors.

According to the executive summary: "The disease prevalence starts to climb in late middle age, peaking from age 8-11, after which prevalence declines in step with the typical lifespan for large and extra-large dogs. Gender does not appear a significant risk, although male dogs are slightly more affected than females." 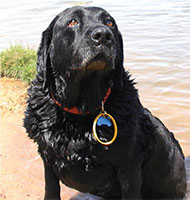 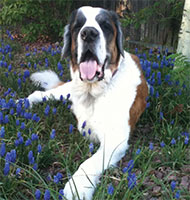 The six breeds at the highest risk for osteosarcoma were Irish Wolfhound, with a 7.31 percent prevalence of the disease; Greyhound, 5.56 percent; Akbash, 4.76 percent; St. Bernard, 4.12 percent; Leonberger, 4.04 percent; and Rottweiler, 3.77 percent. The prevalence among all dogs was 0.35 percent.

According to the report summary: "In analyzing the data set, Nationwide hopes to assist the veterinary community in educating pet owners about the prevalence of osteosarcoma, a disease with a generally poor prognosis. Sharing this information may lead pet owners to choose a different breed of dog. Additionally, a general knowledge of osteosarcoma prevalence allows those with the most affected breeds to be aware of the higher risks, so that affected dogs can be diagnosed as early as possible, when prognosis and treatment options are greatest."

As of Oct. 26, the AVMA Animal Health Studies Database listed 33 studies in 23 states involving osteosarcoma. Some are actually the same study in multiple locations, and most are looking at treatments targeting immune responses or pain relief. The treatments include antibodies against nerve growth factor, stereotactic radiation therapy, vaccines, and chemotherapy.

A new report on osteosarcoma appears in this issue of the JAVMA (see related story, page 1293). Researchers from Colorado State University and the University of Illinois collaborated on "Prognosis for dogs with stage III osteosarcoma following treatment with amputation and chemotherapy with and without metastasectomy." According to the results, in dogs with osteosarcoma that underwent amputation and subsequently developed metastatic (stage III) disease, "Metastasectomy alone was associated with a longer median stage III survival time (232 days) than no metastasectomy (49 days)."

The forthcoming treatment from Aratana Thera­peutics is a freeze-dried version of a vaccine studied by Dr. Nicola J. Mason at the University of Pennsylvania. While about 80 percent of dogs die within two years of an osteosarcoma diagnosis, the survival rate was 50 percent at three years in a pilot study of the vaccine in 18 dogs. As phase 3 of its osteosarcoma project, Morris is committing funding for a trial of the vaccine in 80 dogs.

"The foundation funds a broad array of osteosarcoma studies, but we're especially excited about our investment in novel therapeutics," Dr. Reddington said. "We need to look beyond conventional therapies, which haven't changed in two decades."

In addition to the Osteosarcoma Initiative, Morris continues to fund studies of other methodologies to treat osteosarcoma.

One study is looking at microRNAs, small pieces of RNA that don't encode proteins but manage expressions of other genes. According to a study description, researchers at The Ohio State University are identifying which microRNAs are expressed in osteosarcoma and which are associated with certain breeds and prognoses. They hope to identify new molecular targets for therapy.

A Morris-funded study at the University of Illinois is examining the use of nanoparticles to deliver chemotherapeutic agents directly to osteosarcoma cells in the bone. Other studies are looking at pain control.

Dr. Khanna, formerly of the National Cancer Institute, said osteosarcoma is the same disease in dogs and in humans. He has focused on studying why the cancer spreads from bone to lung.

"We do so effectively manage the primary tumor that it never really becomes an impact on quality of life or longevity," he said, "But because we do so well on the primary tumor, what we're left with is the problem of the disease spreading to the lung."

He helped investigate rapamycin as a treatment for metastasis, and the drug advanced from cell-based studies to mouse studies to the current dog studies supported by Morris Animal Foundation, with the potential to advance to human studies. He cautioned that a lot of work is needed to demonstrate the effectiveness of various osteosarcoma treatments that have been promising in small studies.

Dr. Khanna practices at The Oncology Service in the Washington, D.C., area, which saw two cases of osteosarcoma on the day he spoke with JAVMA News. He also is now chief science officer of Ethos Veterinary Health, a national network of specialty hospital groups.

Ethos is collaborating on early development of "liquid biopsy" as a way to use a blood sample to determine the burden of cancer in dogs with osteosarcoma or hemangiosarcoma by looking at DNA from cancer cells circulating in the bloodstream. Results of the liquid biopsy could track the effectiveness of treatment.

Dr. Cilursu, president of Bone Cancer Dogs, initially joined an existing Yahoo support group for owners of dogs with bone cancer. She formed a new Yahoo group in 2005 that is active to this day, with more than 3,000 members.

Members talked about a need for more research and about starting a website as an informational resource. Several years after formation of the new support group, members collected donations to start the website at www.bonecancerdogs.org.

With the advent of the website, members of the support group began talking about creating a nonprofit focusing on osteosarcoma research and awareness. They created the organization in 2008 and have funded three clinical trials, partly by forgoing funding an update of the website. Members also have established a Facebook group, which has more than 1,000 members.

Dr. Cilursu said having a support group was absolutely invaluable for her, and she otherwise would not have survived emotionally after bone cancer was diagnosed in her second dog.

"People share their experiences—what worked for them, what didn't—and just a lot of personalized support for people that have a dog that they're dealing with that has bone cancer," she said. "Or sometimes people join because they've lost a dog and they just don't know where to turn, and people just want to talk to other people that have gone through it."

Sooner or later, every owner loses the dog, and then the support group is there. Some people still post who haven't had a dog with bone cancer for years.

The group has a sort of mantra that there is no wrong decision, that dog owners are doing the best they possibly can. For some people, the decision to amputate is especially difficult. Specialty care can be a matter of cost.

"The most important thing for any client that is dealing with a dog with bone cancer is to be given information," Dr. Cilursu said. "Having options doesn't make it an easy decision, it just makes it an informed decision."

People also struggle with when to euthanize a dog. Today he ate, yesterday he didn't. Dr. Cilursu said, "These are the down-to-earth, real-life struggles that people go through that we help them with."

And the nonprofit supports research to help dogs down the road.