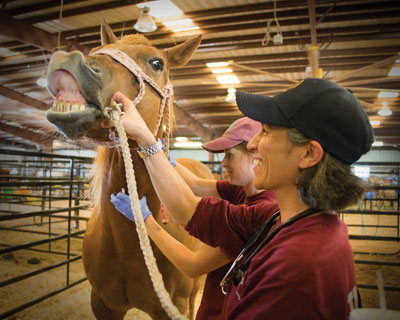 The hurricane made landfall Aug. 25 as a Category 4 storm. Then it hung out, she said, dumping rain while the wind continued. After that, the rivers flooded, meaning that coastal communities got hit from both sides.

By Sept. 5, the emergency team had provided veterinary care for well over 2,000 small and large animals impacted by the storm. The team was working with local practitioners, who contributed to response efforts even as they began the process of recovery.

Dr. Dan Posey, Texas VMA president, said every urban and rural practice along the coast was impacted in the sense that clients and patients were affected. He said some practices were damaged by floodwaters or other storm effects, but many have recovered remarkably, although some have had to move to alternative locations.

The American Veterinary Medical Foundation offers reimbursement grants of up to $5,000 for veterinarians who provide services and shelter for animal victims of disasters such as Hurricane Harvey. On Aug. 31, the AVMA announced that it had donated $100,000 to the AVMF for Hurricane Harvey relief efforts (see JAVMA, Oct. 1, 2017, page 750).

Even before the rains from Harvey had ended, carriers for the AVMA PLIT began receiving claims from impacted veterinarians. Along with professional liability insurance, the Trust offers a variety of other products such as business insurance, which includes property coverage.

The AVMA expanded its Harvey webpage at http://jav.ma/HarveyAVMA to address Hurricane Irma and Western wildfires. As of Sept. 8, the page provided a summary of the AVMA's role in responding to the disasters; resources for affected veterinarians under the headings of insurance, disaster reimbursement grants, business relocation for Florida veterinary establishments, and assistance for affected animals and clients; guidance for individuals who want to help now or with future volunteer work; resources to plan and prepare for disasters; and situation updates from emergency officials on Harvey, Irma, and the wildfires.

Individuals wishing to support the efforts of veterinarians on the ground directly can consider donating to the AVMF. Donors should visit www.avmf.org/donate and use the code "Disaster Relief" to designate money for reimbursement grants.

The Texas Animal Health Commission is the state's coordinating agency for disaster response related to all animals, including livestock and pets. The commission worked with partners to coordinate assessments from the ground and the air. As of the evening of Sept. 5, the commission had addressed or was addressing animal issues in 15 counties, while assessments continued in 21 counties.

"This has been a really unique response," said Dr. Clendenin, an instructional assistant professor with the Texas A&M University School of Public Health. "Most of the time when you have a disaster, you have the impact of that disaster, and then it moves along, and then we come in right after it passes."

The ongoing nature of Harvey delayed response efforts to find animals, which were sometimes stuck in water for three to five days. Because the storm impacted so many communities, the emergency team couldn't work out of just one location.

The team set up a hub in Rockport, which had a lot of infrastructure damage. A couple of veterinarians and a support staff member worked with local veterinarians to address animal needs. As of Sept. 4, they had seen more than 100 small and large animals.

Moving up the coast to the Houston area, the team had a hub in Fort Bend County initially, then sent members to a temporary animal shelter in Brazoria County with about 1,200 small and large animals. The team treated animals as necessary, coordinating care for animals that already had a veterinarian. The team also sent veterinarians to check on animals at a human shelter in Brazoria County.

On Sept. 4, the team opened a third hub closer to the Louisiana border in Jefferson County to provide support in multiple counties. Speaking from that hub the next day, Dr. Clendenin said the team was seeing a lot more livestock.

The Veterinary Emergency Team operates behind the lines, she added, with governmental and shelter organizations handling the rescue and day-to-day care of animals.

"This response is so big, and like I said, for many communities, they're getting a double whammy. They get it from the coast, and then they get it from the rivers," Dr. Clendenin said. "And it's just amazing to be able to have the relationships we have to fill a gap in veterinary care." 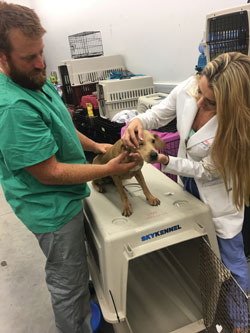 Dr. Jennifer Hennessey, a member of the Texas VMA, set up a volunteer-run shelter area at her clinic, Animal ER of Northwest Houston, to care for evacuated pets while their families were being relocated. The facility housed more than 150 animals. At left is Corey Soirez, a veterinary technician volunteer from Austin. (Courtesy of the Texas VMA)

Dr. Posey, previously a rural mixed animal practitioner and now at West Texas A&M University, said the first effort through the TVMA was reaching out to practices along the coast before the hurricane made landfall to create a network. As of Sept. 5, there were areas still under water. One of the known losses was the building of Gulf Coast Veterinary Specialists in Houston.

"There is no doubt that there is some damage to lots of clinics along the coast and inward, too, pretty devastating stuff," Dr. Posey said. "The recovery from this will be a very slow process."

The disaster affected many rural areas of Texas, Dr. Posey said, but residents did not yet know the entire impact on the cattle industry or other agricultural sectors. There were rivers that flooded thousand-year flood plains where many people live, resulting in displacement of many rural residents.

The TVMA also has been very involved in helping veterinarians connect with animal response teams. Dr. Posey said there has been an outpouring of veterinarians helping with relief efforts.

"We are humbled at the TVMA by the great outpouring of donations by our colleagues," Dr. Posey continued. The Louisiana VMA donated $100,000 to the Texas Veterinary Medical Foundation, and the Veterinary Emergency and Critical Care Society donated $33,000. The TVMF will use these donations to respond to the needs of veterinarians impacted by Harvey and for the care of animals in the disaster response. The TVMF will give $2,000 grants to veterinarians who help with the relief efforts.

According to an Aug. 31 letter from the TVMF to veterinarians, "The Texas Veterinary Medical Foundation's disaster fund was designed to assist veterinarians who provide medical care to the animal victims during and after any disaster.

"However, we suspect there may be a much greater need in many cases related to Hurricane Harvey. Please be sure to include any additional items you'd like for consideration. We are going to do our best to help as many veterinarians with as many things as possible."

Our hearts go out to all who are affected by Hurricane Harvey."

In another effort, Operation Reunite, the TVMA has been working with the Houston Society for the Prevention of Cruelty to Animals and the TVMF on fostering displaced pets through veterinary clinics. Using the clinics' own fostering networks, the plan is to foster animals for 45 days or less, reuniting pets with owners as soon as possible. This program was developed during Hurricane Katrina.

"We are just in the very beginning of this ordeal. This is going to be a long way back for many of the coastal communities," Dr. Posey said. "It's going to be a tough time for Texas."

Through daily operations at the Animal Response Operations Coordination Center at its headquarters in Austin, the Texas Animal Health Commission was striving to meet animal-related response needs by coordinating efforts of state, federal, industry, and nongovernmental groups with an animal focus.

According to an Aug. 30 statement, "Strong winds and rising flood waters destroyed fences and displaced large numbers of livestock. TAHC is coordinating with Texas A&M AgriLife Extension to establish livestock supply points in areas of critical need, and with (the) Texas Department of Agriculture to receive and distribute donations of hay and livestock feed."

The commission requested the services of Texas and Southwestern Cattle Raisers special rangers to assist in capturing stray livestock. The commission compiled a partial list of animal holding facilities and shelters for livestock and pets. With the U.S. Department of Agriculture and nongovernmental organizations, the commission supported evacuation, sheltering, and care of companion and zoo animals.

"Our hearts go out to all who are affected by Hurricane Harvey," said Dr. Andy Schwartz, state veterinarian and TAHC executive director, in the statement. "It is a tumultuous time in our State, but we are grateful for the support and resources our industry, government partners, non-governmental partners, and neighbors are providing."