The quirks of working with goats and sheep

Goats crowded up to a fence to eat leftover candy canes from their owner’s hands as Dr. Chris Duemler walked around ponderously inside the herd’s enclosure.

On this foggy Thursday morning, Dr. Duemler was visiting the hobby farm to try to determine the cause of the goats’ dilated pupils. In the end, he suggested inquiring about the possible presence of insecticide on the hay. He did determine that Listeria probably caused a recent abortion, and he recommended administering tetracycline in the water.

Dr. Duemler of Brodhead Veterinary Medical Center in Brodhead, Wisconsin, is one of many veterinarians across the country who spend time working with small ruminants, particularly goats and sheep. The category also includes camelids, such as llamas and alpacas, and cervids, such as deer and elk. 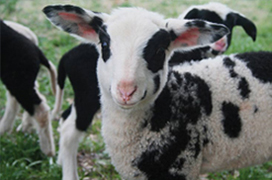 Veterinarians who work with small ruminants say the animal types and health problems vary regionally. The American Association of Small Ruminant Practitioners, with more than 1,000 members in the U.S. and Canada, seeks among other goals “to improve the health and welfare of sheep, goats, camelids and cervids.” According to the U.S. Department of Agriculture, half of sheep operations and a third of goat operations in the United States consult a veterinarian in the course of a year.

Dr. Patty Scharko is a field and extension veterinarian at Clemson University and the current president of the AASRP. About 75 percent of her work is with small ruminants and 25 percent with beef cattle.

She became interested in small ruminants after veterinary school while completing an internship in ambulatory practice at Tufts University. She was chauffeur for Dr. Mary Smith of Cornell University when Dr. Smith came to speak at Tufts. Dr. Smith is the lead author of “the” book on goat medicine, titled simply “Goat Medicine.”

“That’s where it started,” said Dr. Scharko, who went on to a career in academia. When producers found out she was interested in small ruminants, they began calling her. She said, “They call you, and you come out, and you just gain more experience each time.”

Her current position includes being the scrapie epidemiologist for South Carolina, so she does educational programs to promote scrapie eradication. Internal parasites are the worst health problem for sheep and goats in the Southeast, however, so she talks with producers about deworming.

Part of the problem is resistance to antiparasitics. Dr. Scharko said, “It’s not simple anymore. It’s not just, ‘Use this dewormer.’ It’s more management.” So she talks with producers about management and works with veterinarians to care for animals.

Recently, though, Dr. Scharko has seen many companion animal practitioners attending continuing education on small ruminants. Lately, she hears much more about people buying a few goats to keep the brush down, and she thinks many people want to homestead with a dairy goat or dairy sheep on 5 acres.

When providing CE for companion animal practitioners, Dr. Scharko tries to go through the basics of caring for goats and sheep such as husbandry, nutrition, and use of guard dogs and fencing while also covering some of the major health problems.

The AASRP provides a variety of CE on small ruminants for veterinary conferences including the AVMA Convention. Members of the AASRP also have access to an active email discussion board and receive the quarterly newsletter Wool & Wattles, among other benefits. To expose veterinary students to small ruminants, the AASRP has student chapters and an externship fund.

At midday, Dr. Duemler stopped at home for lunch with his wife, Vicki. They have kept goats for about 20 years—ever since one of their four children, at the age of 5, unilaterally decided to get a goat on a farm visit.

The couple currently keep Nubians and have about 28. The limit is usually eight milkers, to allow Dr. Duemler to milk them twice a day by hand. He said, “Milking goats is a very nice, relaxing time to meditate. That’s when you can do a lot of pondering and thinking.” He makes mozzarella, and his wife makes other kinds of cheese.

Dr. Duemler, Region 3 director for the AASRP, has been with the same practice for 40 years. At first, the area had only a few goats on hobby farms. He still spends half his time working with dairy cows, but now the area has about 30 commercial goat dairies and three creameries that make goat cheese. He also works with dairy and meat sheep.

He said many goat farmers are women, including the local Amish. The men work off the farm, and goats are not hard to handle. The animals are smart enough to learn a routine, going into stalls for milking. Some Amish use air-driven milking machines.

Dr. Duemler has always been interested in goats. He said, “I am fascinated by their efficiency, how easy they are to manage.”

The National Animal Health Monitoring System of the USDA Animal and Plant Health Inspection Service has conducted studies on goats, sheep, and cervids in the past decade.

According to a report on the NAHMS Sheep 2011 study, 51.8 percent of operations had consulted with a private veterinarian during the preceding year, up from 46.1 percent in 2001. Of note, “Approximately twice the percentage of operations consulted a veterinarian for disease diagnosis, disease prevention, and lambing problems in 2011 than in 2001.”

According to a report on the NAHMS Cervid 2014 study, “About half of all operations had a veterinarian visit during the study reference period.”

The JAVMA published “Factors affecting use of veterinarians by small-scale food animal operations” (PDF) on Nov. 1, 2013. The study covered small-scale operations with gross annual agricultural sales between $10,000 and $499,999 and for which an animal or animal product represented the highest percentage of annual sales.

The study found that 60.4 percent of small-scale sheep and goat operations used a veterinarian during the 12 months preceding a 2011 survey. The reasons for not using a veterinarian were that the operation provided health care for the animals, 59.1 percent; there was no animal disease or other need for a veterinarian, 49.0 percent; and veterinary care was too expensive, 14.5 percent.

After lunch, Dr. Duemler headed back to his clinic. Brittany Hedrick, a veterinary student from the University of Missouri externing at the practice, accompanied him to Friendly Franseen Acres in Poplar Grove, Illinois.

They were visiting the commercial goat farm for pregnancy checks. The farm’s owner, Jeremy Franseen, and his son brought in groups of goats to milking stalls. Then, Dr. Duemler and Hedrick used an ultrasound machine on each animal.

Dr. Duemler visits some herds quarterly. Most goats breed in the fall, so then he focuses on breeding preparation. One issue in winter is nutrition for goats that are not producing milk. Kidding problems extend from winter into spring. Spring is the time for rearing kids and breeding out of season for stable production of milk. In Wisconsin, parasites are a problem in the summer.

Milk quality is an ongoing concern. Too much bacteria give an undesirable bite to goat cheese, and creameries pay more for better-quality milk.

At the end of the visit to Friendly Franseen Acres, Hedrick cooed over the kids in another building while Franseen and Dr. Duemler talked shop. The kids bleated and clamored in their pens for attention.

Dr. Joan Bowen owns Bowen Mobile Veterinary Practice, a solo small ruminant practice in Larimer County, Colorado, and she is the current AASRP delegate in the AVMA House of Delegates.

She started her practice after earning her veterinary degree in 1976. Few veterinarians wanted to provide services for the small ruminants in the area, but the native of Colorado had developed an interest in sheep and goats before veterinary school. She also provides small animal services for her food animal clients who have pets. She said, “It’s a niche practice. I am not sure that someone else could create the exact same type of practice I have, in a different location.”

Back in 1976, the area had enormous numbers of sheep in feedlots. The sheep went on pasture and out on the range. Now, large commercial goat operations are giving way to backyard pets and small dairy and meat operations.

Dr. Bowen said veterinarians can find small ruminants across the country, from farmed deer in the Midwest to herds of meat goats in the South to backyard goats in certain cities such as Denver.

“There are a lot more opportunities to increase small ruminant medicine if we look more broadly,” she said. “When you consider the vastness of the United States, I think that small ruminants do play a role in our agriculture economy that is probably underestimated and underappreciated.”

She emphasized geographic differences in the health problems of small ruminants. Parasites are not a severe issue in the West, unlike in wet climates. Foot rot can be a problem in confinement operations in the humid central Midwest. The Northeast has a heritage of sheep on the same properties for generations, so the flocks have endemic diseases that newer flocks will never see.

Lack of drugs is an overarching problem for small ruminants. With sheep and goats, veterinarians have to live within extralabel-use rules for food animals. Cervids and camelids are not regulated as food animals, however.

Dr. Bowen characterized the AASRP as a friendly, outgoing organization trying to provide information about preventing and treating disease in small ruminants. About 10 percent of members are veterinarians who work primarily with small ruminants, while the remaining 90 percent have small ruminants as part of their practice.

Many of the members own small ruminants. Dr. Bowen said, “They want more information about taking care of their own animals, and then they find out that their neighbors next door are asking them to do their veterinary work because all of a sudden, they know more about small ruminants.”

On the next Monday, Dr. Duemler was off to visit a farm with about 200 dairy sheep. One of his partners works with llamas and alpacas part of the time. The area doesn’t have many farmed cervids following the discovery of chronic wasting disease in wild deer, but Dr. Duemler previously provided care for a herd of farmed elk.

Coming up in July, Drs. Duemler and Scharko will be among the speakers presenting CE on small ruminants at AVMA Convention 2017 in Indianapolis. Dr. Duemler will present sessions on dairy goats, and Dr. Scharko will present sessions on goats and sheep. Other speakers will cover additional topics in small ruminant practice, including the care of camelids and of white-tailed deer.