By Story by R. Scott Nolen

As America’s entry into World War I seemed increasingly likely, President Woodrow Wilson and Congress readied for the coming conflict, with the National Defense Act of 1916. Signed by President Wilson on June 3, the act bolstered U.S. military preparedness in a number of ways, including the creation of a Veterinary Corps within the U.S. Army.

When Congress declared war on the German Empire in April 1917, the Army employed 57 veterinarians working mostly in the area of equine surgery and medicine. Today, the Army Veterinary Corps comprises approximately 880 men and women supporting Department of Defense missions at home and abroad in the areas of food safety and security, animal health care, veterinary public health, and research and development.

On June 3, the Veterinary Corps will celebrate its centennial with a ceremony at the U.S. Army Medical Department Museum at Fort Sam Houston in San Antonio, where a monument depicting aspects of the corps’ history and mission will be unveiled (see “A century of history in bronze”). The centennial is a benchmark highlighting the diverse services the corps has provided to the nation over the past 100 years, explained Maj. Troy Creason, a veterinarian and assistant to the chief of the Army Veterinary Corps.

“From being the ‘mechanics’ of a horse-powered Army in 1916 to developing tests for detecting botulism in canned foods during the intra–World War years, and current efforts to develop a human vaccine for Ebola, the accomplishments of the U.S. Army Veterinary Corps span the spectrum of the veterinary profession,” Dr. Creason said.

The Army Veterinary Corps’ 880 personnel include 600 active-duty Veterinary Corps officers and 280 officers in the Army Reserve. Supporting this small force of veterinary professionals are almost 1,600 enlisted food inspection specialists, 560 animal care technicians, and approximately 425 civilian employees. All told, there are just over 3,400 members that constitute the U.S. Army Veterinary Service.

The Veterinary Corps’ mission: to provide highly skilled and adaptive veterinary professionals to protect and improve the health of people and animals while enhancing readiness throughout the Department of Defense. The Veterinary Corps accomplishes its mission by serving on Army, Air Force, Navy, and Marine Corps bases throughout the world supporting U.S. military men and women.

Approximately 80 Veterinary Service personnel, including roughly 20 veterinarians, are deployed worldwide at any given time. “From host nation capacity-building operations in South America to combat operations in Afghanistan, the Veterinary Corps provides boots-on-the-ground support to a variety of military efforts in the interest of national security,” Dr. Creason said.

Veterinary medicine’s place within the nation’s armed forces was recognized long before the Army Veterinary Corps’ creation. During the Revolutionary War, George Washington, then commander-in-chief of the Continental Army, in 1776 ordered that a “regiment of horse with a farrier” be raised. When the American Civil War ensued nearly a century later, the War Department provided each Union cavalry regiment with a veterinary surgeon of the rank of regimental sergeant major and paid him $75 a month.

In 1879, Congress passed a resolution requiring that all applicants for veterinary positions with the cavalry be graduates of a recognized veterinary college. Less than two decades later, veterinarians were inspecting meat, poultry, and dairy products being transported to Army posts. The political scandal that arose when untold numbers of U.S. soldiers became ill or died after eating adulterated beef during the Spanish-American War of 1898 had incited the public to demand greater safeguards to prevent such disasters.

The Army Veterinary Service has participated in every U.S. conflict since World War I, serving as an essential element in the maintenance of the health and well-being of both animals and soldiers. Many members have paid the ultimate price for their service. The most recent of these was Lt. Col. Daniel E. Holland, a veterinarian killed May 18, 2006, in Baghdad when an improvised explosive device detonated near his Humvee during combat operations of Operation Iraqi Freedom. 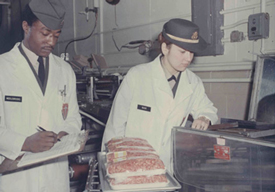 Veterinary Service personnel were killed in both world wars and Vietnam, according to Dr. Creason. During World War II, many personnel were captured by the Japanese after the fall of the Philippines and subsequently died in prison camps. One of them, Dr. Creason noted, was Capt. Clayton Mickelsen, a veterinarian who had previously been awarded the Distinguished Service Cross for combat actions in the Philippines.

As for the next 100 years, the Veterinary Corps will continue to build and adapt its veterinary forces to support military operations for the DOD in the defense of the United States. “Through veterinary medical care, public health, food protection, and a focus on research and development activities, the Army Veterinary Service will remain dedicated to saving lives and enhancing the readiness of U.S. military forces,” said veterinarian and Brig. Gen. Erik Torring, the current and 26th chief of the Army Veterinary Corps.