To help ensure the long-term viability of the U.S. racing industry and to protect racehorses, the American Association of Equine Practitioners has created an initiative called Prescription for Racing Reform. Its central component is the association’s commitment to identifying non–race day treatment alternatives for exercise-induced pulmonary hemorrhage.

The drug furosemide has been at the epicenter of the controversy over drugs used in horse racing, or more specifically, drugs that are administered on race day.

The only medications that currently can be given on race day are furosemide and other medications used to treat EIPH, one of the most common medical problems affecting racehorses. 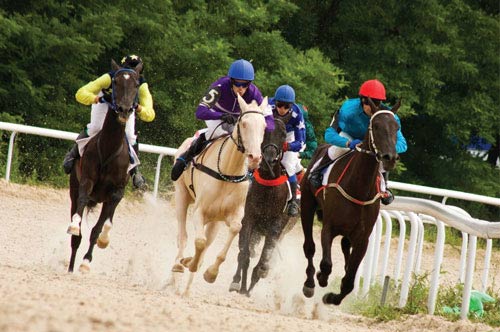 Although furosemide is widely used in the United States, a national and international debate has continued for decades over its effectiveness in preventing EIPH. Except for the U.S., some South American countries, and parts of Canada, most countries have prohibited the use of furosemide on race day. This has been largely due to public backlash against the use of any and all drugs in the sport.

So for the past few years, the U.S. horse racing industry, including the AAEP, has been working to get all 38 racing jurisdictions to adopt the Racing Medication and Testing Consortium’s National Uniform Medication Program. It involves four components: the Controlled Therapeutic Medication Schedule, which lists thresholds and recommended withdrawal times for 26 commonly used legal substances; requirements for laboratory accreditation; a multiple medication violation penalty system; and third-party administration of furosemide on race day.

Then in late February, the AAEP Racing Committee held a strategic planning session to address key issues affecting the health of racehorses. The result was the development of the Prescription for Racing Reform, announced in late July. Key points of the initiative are the following:

Regarding the last point, the AAEP will call a meeting of scientists, including experts on EIPH in horses, pulmonary function, and sports medicine in humans, with the goal of identifying research priorities that may yield effective alternatives to current EIPH treatment protocols. The association will also pursue funding for identified research projects. In 2013, the AAEP petitioned the American College of Veterinary Internal Medicine to develop a consensus statement on EIPH (see story).

Other points of the plan address stiff sanctions for rules violators and issues with compounded medication. The complete 10-Point Prescription for Racing Reform can be viewed at jav.ma/1WfBzMd.

“Our desire to investigate non–race day treatment alternatives for EIPH serves both the horse and the industry, and we are committed to developing a strategy that goes beyond the simple cessation of race-day medication,” said Dr. Kent Carter, 2015 AAEP president.

Meanwhile, a few federal bills introduced this year also seek to reform horse racing but with an eye on outside organizations to achieve changes. They are as follows:

AVMA entities were reviewing these bills as of press time in mid-August.

AAEP develops veterinary guidelines for the care of racehorses (Dec. 15, 2010)