By Story and photos by Malinda Larkin

Let’s start with a geography lesson. Starkville is located in central Mississippi and had a population of 24,360 as of 2012. Mississippi State University, which is partially located in Starkville, had an enrollment of 20,161 in 2013. The closest city with more than 100,000 residents is Jackson, Mississippi, which is 125 miles southwest of Starkville.

Given those figures, it may not seem plausible that the MSU College of Veterinary Medicine could offer high-end diagnostic testing and treatment options for its neurology and oncology patients. And yet, this is what it has: a 64-slice CT scanner, a 3-T MRI scanner, a 4-D ultrasound machine, and a linear accelerator that is so precise its beam can target a tumor within 5 millimeters.

“No one in the U.S. has better equipment and facilities than we do. Other veterinary schools are always getting new stuff. They may get a new CT or MRI, but this was straight-across-the-board pretty amazing. A lot of people can’t imagine what all we really have here,” said Dr. J. Gregg Boring, an emeritus professor of radiology at the veterinary college.

So how did a veterinary college in a rural area—without a medical school to partner with—gain access to such impressive equipment and retain faculty conducting cutting-edge neurological research? The answer involves fighter pilots, an unsold house, and rigorous cleaning protocols.

Back in 2002, Stephanie Doane, PhD, a professor in the MSU Department of Psychology, received a grant from the Office of Naval Research to study the brain activity of fighter pilots during flight simulations to optimize the layout of aircrafts’ dashboard controls.

The university’s Institute for Imaging & Analytical Technologies used the grant to purchase a $2.7 million, high-powered MRI machine. The institute, in collaboration with Premier Radiology PA of Tupelo, Mississippi, built a 25,000-square-foot medical facility in Starkville to house a diagnostic imaging center, including the MRI machine. However, because of construction of the new facility, the machine was not available for clinical use until fall 2006.

Dr. Doane happened to be an animal lover and wanted to get the veterinary college involved. So, at first, the college leased a few rooms to allow veterinary faculty to anesthetize animals and use the imaging equipment. Eventually, the college wanted further use of the equipment, and the college administration figured a neurology and neurosurgery service would be the way to go.

The administration had in 2008 established a 509(a)2 nonprofit corporation, MSU-CVM-Clinical Outreach Services, to develop and manage private specialty clinics that would enhance teaching and student learning. It had previously opened the Animal Emergency and Referral Center in Flowood, Mississippi. When the opportunity to collaborate with a human medical facility became available in 2010, the college created the Veterinary Specialty Center. That’s when 17,000 square feet were being added to the Premier Radiology facility. Most of the space went to house a Cancer Treatment Center—thanks to the addition of the linear accelerator—but the MSU-CVM-COS remodeled 4,200 square feet of the new space to create the VSC.

The veterinary college received a $500,000 donation to support cancer treatment in animals, which was used to gain 9 percent ownership of the radiation therapy portion of the Cancer Treatment Center along with access to the linear accelerator for treatment of veterinary patients. The agreement also stipulates the nonprofit will pay a percentage of the gross revenue generated by the VSC to Premier Radiology, which operates and maintains its facility and equipment at no cost to VSC. MSU-CVM-COS pays its own staff and veterinarians from the remaining gross revenue. The annual service contract alone for the CT scanner could have cost the nonprofit $600,000 had it bought and maintained the equipment on its own.

The VSC houses a neurology and neurosurgery service and imaging, ophthalmology, and cancer treatment services for veterinary patients. The imaging equipment and the linear accelerator are scheduled on an as-needed basis for VSC use while research patients are scheduled after hours. Protocols have been developed to effectively sanitize the equipment between use by patients, including human and animal patients.

The VSC has two neurologists, one ophthalmologist, and a part-time radiologist. In addition, there are four neurology residents, three veterinary technicians, a receptionist, and two part-time technical associates.

The VSC emulates the human model of medicine in that patients are first seen by their primary veterinarian and then referred to the center, if necessary. Imaging, neurology, ophthalmology, and cancer patients are admitted at the VSC for initial evaluation, imaging, minor surgical procedures, and cancer therapy. Patients that require long-term hospitalization or major surgery are transported to the Veterinary Teaching Hospital for additional care.

The caseload at the VSC varies day to day, from four or five up to 20. Last year, the VSC saw around 1,000 patients and performed over 250 MRI scans. Common cases include emergency disk problems, encephalitis, strokes, and cerebral hemorrhages; brain cancer accounts for about 20 percent of the cases.

For cancer patients, the clinicians first go through diagnostic testing and, if indicated, perform a craniotomy, which would cost $5,000 to $5,500. Then Dr. Boring—with the help of the physicist at the Cancer Treatment Center—develops a radiation treatment plan based on the CT scans to guide the radiation beam so it hits the tumor. The linear accelerator targets tumors with a radiation dose that is tailored to the depth, shape, and size of each tumor, all the while avoiding vital structures such as the optic nerves when directed at a frontal meningioma, for example.

The radiation beams come from all angles, thus helping patients avoid adverse effects of radiation therapy such as skin burns and radiation sickness.

Another part of what has made the VSC such a success has been its service chief, Dr. Andy Shores, a clinical professor of neurology and neurosurgery. He is an employee of the VSC and holds a part-time teaching appointment as a clinical faculty member at the veterinary college. That means he receives a base salary as a faculty member but is also paid on the basis of revenue for his work at the VSC.

“I was lucky enough to be exposed to them during veterinary college and my neurology residency at Auburn,” Dr. Shores said. “For me, it’s important to pass that information on to the residents. I feel like I’ve been in a fortunate position to have that kind of training.”

Dr. Shores first made a name for himself in 1988 when he developed the Small Animal Coma Scale, which mimics the Glasgow Coma Scale in human medicine and has become widely used.

Dr. Kent H. Hoblet, dean of the veterinary college, says he knew early on that Dr. Shores would be the one to lead the veterinary college’s neurology service. In 2010, Dr. Shores was the chief neurosurgeon at Auburn; however, he had worked at Mississippi State for six years as a professor of surgery and neurology and still hadn’t sold his house outside Starkville. So, during the 2010 AVMA Annual Convention in Atlanta, Dean Hoblet made his pitch to Dr. Shores.

By the time Dr. Shores came in spring 2011—along with three of his residents—everything at the VSC was up and running. Dr. Shores credits Dean Hoblet and Dr. Ron McLaughlin, head of the Department of Clinical Sciences at the veterinary college, for establishing what they have today.

“The uniqueness of this place allows the opportunity to practice neurology at a high level and establish a strong residency,” Dr. Shores said.

In fact, he presented diplomate certificates in June to three of his former residents at the American College of Veterinary Internal Medicine meeting in Nashville. At that same meeting, some of Dr. Shores’ research was presented, including a project he and one of his residents, Dr. Maria Perez Hernandez, have been working on regarding a new style of intracranial pressure bolt.

“There are plenty (of bolts) out there for people, but they have thicker bones than dogs, so when you screw the bolt in, for dogs you can’t get it to stabilize well or the dogs knock it apart. We’re developing a system to let it be used in dog skulls or kids’,” he said.

The scale has been validated by numerous studies, but Dr. Shores said the problem remains that the veterinary field has plenty of interesting cases but not enough to support a case study. So, he and Dr. Simon Platt at the University of Georgia, with the help of a software engineer, developed a smartphone app to create that critical mass. Veterinarians—preferably those working in emergency clinics—register through the app, and, using the scale to look at each component of their case, they input data.

(The Veterinary Specialty Center) does give us an advantage. We’re one of the smaller veterinary schools, but this gives students the opportunity to see something special.

Dr. Shores is also working with a human neurosurgery resident at the University of Alabama at Birmingham to create a similar system for pediatric head trauma injuries. In addition, Dr. Shores and a neurosurgeon at UAB, Dr. M.R. Chambers, who has MD and DVM degrees, are looking at the molecular genetics of meningiomas in humans and dogs. They’re finishing the first phase of the project, and Dr. Betty Chow, an oncology intern at MSU, reported on the results at the ACVIM meeting in June. They’re also considering putting together a proposal to analyze viral vectors as therapeutic agents for glioblastomas.

In its three years of existence, the Veterinary Specialty Center has thrived and is even seeing its caseload expanding, especially as referral relationships become more established. Radiation therapy patients have come from as far as Baton Rouge, Louisiana; Little Rock, Arkansas; Memphis, Tennessee; Mobile, Alabama; and New Orleans. 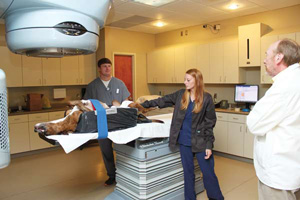 Now the VSC is about to hire an oncologist. Soon it also will likely add an ophthalmology intern. Patients aren’t the only ones benefiting from the center’s presence. Up to now, fourth-year students could choose to go to the VSC as a two-week elective, but starting this summer, it’s become a four-week required rotation that includes didactic lectures and case rounds focusing on radiation oncology, ophthalmology, and neurology. Dean Hoblet said every day, the college discovers a new benefit from the VSC, whether it’s giving students more exposure to the private practice setting or facilitating one-health research.

“It does give us an advantage,” Dr. Hoblet said. “We’re one of the smaller veterinary schools, but this gives students the opportunity to see something special.”

Dr. Shores said combining research, clinical work, and education takes a lot of effort but is well worth it.

For Dr. Boring, the former interim dean and chief of radiological services at Mississippi State, the specialty center fulfills his desire for “an edifice that showed Mississippi’s attention to the importance of veterinary medicine.”

He says people may perceive Mississippi as a low-income, unprogressive state, but a closer look shows that the state is a major agricultural producer and innovator. “People need to recognize the importance of what we do,” he said.