By Greg Cima
In June, a U.S. magistrate ordered federal authorities to evaluate the safety of many uses of antimicrobials in livestock.

U.S. Magistrate Theodore H. Katz of the Southern District of New York ruled that the Food and Drug Administration needs to conduct the evaluations in response to petitions filed in 1999 and 2005 and denied by the agency in November 2011.
The 1999 petition sought withdrawal of approval for “subtherapeutic” uses in livestock feed of any antimicrobials used in human medicine. The 2005 petition sought withdrawal of approvals for all herdwide and flockwide uses in feed of penicillins, tetracyclines, aminoglycosides, streptogramins, macrolides, lincomycin, and sulfonamides to promote growth, prevent disease, or control disease.

In May 2011, four of the petitioners—the Center for Science in the Public Interest, Food Animal Concerns Trust, Union of Concerned Scientists, and Public Citizen—were joined by the Natural Resources Defense Council in filing a lawsuit that accused the FDA of unreasonably delaying action on the petitions and of failing to follow through on a 1977 proposal to withdraw some approvals for use of penicillin and tetracycline antimicrobials in feed. The Environmental Defense Fund, American Academy of Pediatrics, and American Public Health Association were represented in the petitions but not in the lawsuits.

The FDA already is appealing an order Katz delivered March 22 in a ruling on part of the lawsuit. At that time, he told the agency to restart the proceedings begun in 1977.

In response to both petitions, the agency indicated that it shared the organizations’ concerns about the use of medi-cally important antimicrobials in food-producing animals for growth promotion and feed efficiency. But the agency noted that federal law requires giving the sponsor of a drug an opportunity for a formal evidentiary hearing before proceeding with withdrawal of an approved drug.

In response to the 2005 petition, the agency also noted that decisions on whether to initiate withdrawal proceedings are primarily made internally, although drug sponsors and the public can be invited to participate. The process can include evaluation of data and information on a drug, data collection, and risk assessment.

FDA officials indicated in both denials that the agency was addressing antimicrobial resistance concerns through al-ternative measures. Contested, formal withdrawal proceedings can consume extensive time and agency resources, as shown by the five years and $3.3 million spent on withdrawing approvals for various uses of enrofloxacin in poultry, the denials stated.

Instead, the FDA indicated it was pursuing voluntary changes that were further described in a draft guidance document and a final one published in April 2012. Those documents together describe the efforts the FDA wants from agriculture and pharmaceutical industries to phase out uses of antimicrobials to aid livestock growth and require veterinarian oversight for remaining uses.

Katz said in his ruling that, under federal law, time and money costs do not justify refusal to initiate withdrawal pro-ceedings, and he questioned why contested hearings would occur if the drug industry intended to comply with a volun-tary program.

“The adoption of voluntary measures does not excuse the agency from its duty to review the citizen petitions on their merits,” he wrote. 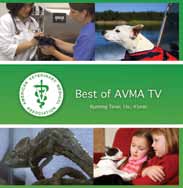 The AVMA has produced a DVD, “The Best of AVMA TV,” for members to educate and entertain clients in the waiting room.

The DVD is a compilation of more than 90 minutes of AVMA videos. The segments cover various subjects in pet ownership and veterinary care, with a focus on preventive care. Topics range from vaccinations to summer hazards. The DVD includes closed captioning.