The field of veterinary technician education has experienced a rapid expansion in the past few years.

In January 2004, 105 AVMA-accredited veterinary technology programs were in existence. As of April 2011, that number had surged to 185. 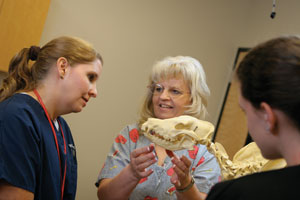 In response, the AVMA Committee on Veterinary Technician Education and Activities decided it needed to make changes to its fee structure, policies, and composition to meet the demands of accrediting U.S. and Canadian veterinary technology programs and monitoring the nearly 200 approved programs. The CVTEA made four recommendations along these lines for the AVMA Executive Board to consider during its meeting June 9-11 in Post Falls, Idaho.

According to background materials, in 2001 the CVTEA created an annual fee for veterinary technology programs to maintain accreditation. This was meant to defray costs associated with accreditation, and it had not been changed since then. The CVTEA explained that an increase was necessary at this time to cover standard increases in operational costs.

Another committee recommendation approved by the board will add a due process policy to the CVTEA Accreditation Policies and Procedures Manual.

The modification comes in recognition of the changes made to the AVMA Council on Education's accreditation policies and procedures this past year (see JAVMA, July 1, 2010), as the recommendation background explained.

Although the CVTEA does not fall under the same U.S. Department of Education requirements that the COE is subject to, the CVTEA chose to develop its own policy to allow for due process in the event of an adverse accreditation decision and because the AVMA's general counsel has advised the CVTEA that due process for adverse decisions is common law, which must be followed.

The last CVTEA recommendation that received board approval was to add another position that represents credentialed veterinary technicians to the 19-member committee.

Since the CVTEA's inception in 1972, the workload for the volunteers on the committee has grown tremendously, according to background materials, and it is expected that the additional position will help alleviate this concern.

The CVTEA has from its beginning included a representative from the COE as a voting member and accreditation site visit team member. However, the position for a COE representative on the CVTEA has been vacant since July 2010, largely because of the extensive time and effort required to serve on both entities.

As a solution, the CVTEA proposed retaining the COE member as a voting member but with no expectation for participation in site visits and adding a position for another credentialed veterinary technician who had graduated from a program accredited by the AVMA or Canadian VMA.

The CVTEA hopes to fill the new position by its November meeting, and this member would serve until 2017.