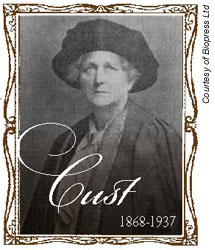 Apart from overcoming barriers of tradition and sexism to go down in history as Britain's first woman veterinarian, Dr. Aleen Cust was, by all accounts, a remarkable woman.

Born in 1868 in Ireland, Dr. Cust was an independent soul, driven and career-oriented at a time during the late 19th and early 20th centuries when British convention considered such qualities to be out of place in a respectable woman.

No matter the challenge, Dr. Cust lived her life as she saw fit, whether as a brilliant college student or a volunteer during World War I. Her choice of veterinary medicine as an occupation defied her family's wishes and was almost scandalous, given that veterinarians in Britain were all men.

Dr. Cust's determination to be a veterinarian eventually made history when, on Dec. 21, 1922, she became the first woman awarded a diploma of membership by the Royal College of Veterinary Surgeons—more than two decades after she was denied the opportunity to join on account of her gender.

An affection for animals and her friendships with veterinarians, not any need for self-glory, are likely what motivated Dr. Cust. Her achievement would not go unnoticed, however. As British veterinarian Dr. Connie Ford noted in her biography "Aleen Cust: Veterinary Surgeon," Dr. Cust was a champion and role model for the women for whom a career in veterinary medicine was made an option.

"To the women students, only admitted to the London Veterinary College in 1927, (Dr. Cust) was a legend and an example, her name a private battle cry in their darkest moments. If they got on so much better than the old men of the RCVS had predicted, it was the trail blazing of this remarkable woman that eased their path," Dr. Ford wrote.

Born Feb. 7, 1868, in Tipperary, Ireland, Dr. Cust was the fourth of six children in a family with royal ties. Following a private education, she began training as a nurse at the London Hospital but quit to become a veterinarian.

In 1894 at the age of 26, Dr. Cust enrolled in the New Veterinary College, Edinburgh, as A.I. Custance to spare her family embarrassment. How exactly Dr. Cust gained admission to the institution is a mystery. Dr. Ford suspects Dr. Cust convinced the dean of her scholastic talents, which proved true. As noted in her Jan. 30, 1937, New York Times obituary, Dr. Cust won "many medals in scholastic competition with men students" during her college tenure.

When she was to sit for the first of her professional examinations in 1897, the Council of the Royal College of Veterinary Surgeons declined Dr. Cust's application. As the governing body for the RCVS, the council defined the word "student" as "male student"; therefore, the council ruled, the RCVS lacked authority to admit a woman to the examination.

Dr. Cust attempted to challenge the decision in Scotland instead of in an English court, again, to spare her family embarrassment. But because the RCVS was located in England, the Scottish courts ruled that they lacked jurisdiction. Dr. Cust dropped her suit and returned to her studies at New Veterinary College.

Following her graduation in 1900, Dr. Cust returned to her native Ireland. Although unable to call herself a veterinarian, she worked as an assistant to a veterinarian and was later named veterinary inspector to the Galway County Council. The appointment put Dr. Cust at odds once again with the RCVS, and the council would eventually rename the position "inspector" to end the controversy.

Dr. Cust left Ireland in 1915 to volunteer for the Young Men's Christian Association. She drove her own car to Abbeville, France, where the YMCA was working, which also happened to be near the headquarters of Britain's fledgling Army Veterinary Corps. Dr. Cust is suspected of choosing the YMCA with the intention of assisting the veterinarians inspecting and treating the hundreds of thousands of horses moving through the area.

Two years later, Dr. Cust was appointed to an army bacteriology laboratory associated with one of the veterinary hospitals. War office records show she was part of the Queen Mary's Army Auxiliary Corps from Jan. 14, 1918, to Nov. 10, 1918. The New York Times obituary stated the RCVS looked favorably on Dr. Cust's army service, helping pave the way to her eventual membership in the institution.

It was Parliament, however, that cleared the final hurdle to Dr. Cust realizing her dream with passage of the Sex Disqualification (Removal) Act of 1919. Under the new law, women could no longer be barred from any profession. In her biography, Dr. Ford recounts how when the law was brought up at a quarterly meeting of the RCVS Council in January 1920, it elicited a brief response from the council lawyer: "That is so. Women are now entitled to enter the veterinary profession."

When Dr. Cust petitioned to take the examination in October 1922, the RCVS Council accepted her application, requiring Dr. Cust to sit for the oral part of the final exam only. An editorial in the Oct. 28, 1922, issue of The Veterinary Record welcomed the decision "as a matter of plain justice" and wished Dr. Cust every success. On Dec. 21, 1922, RCVS President Henry Sumner personally presented Dr. Cust with her diploma—22 years after she completed her veterinary education.

Dr. Cust never married, and during her later years she was an engaged participant of two veterinary societies. Near the end of her life, she would write: "I have had the inestimable privilege of attaining my life's ambition."

Shortly after Dr. Cust's sudden death at age 68 on Jan. 29, 1937—she was visiting friends in Kingston, Jamaica, and collapsed after treating an injured dog—an obituary published in the Feb. 6, 1937, edition of The Veterinary Record reported her passing "will be specifically mourned by the women who, already numbering sixty, have taken the road thus courageously opened up for them."

In honor of World Veterinary Year, JAVMA is highlighting key international veterinarians from the past 250 years.