More veterinary grads investing in their careers with additional training

More and more veterinary graduates are participating in internships and other advanced education programs, according to data compiled by the AVMA.

AVMA surveys of veterinary graduates from veterinary schools and colleges in the United States found the proportion of graduates accepting positions in advanced training has increased 9 percent in the past year, from 39.9 percent in 2008 to 43.5 percent in 2009 (see JAVMA, Sept. 1, 2009, "Facts & Figures").

By contrast, in 1991, only 17.8 percent of veterinary graduates were signing up for internships, residencies, and advanced degree programs. 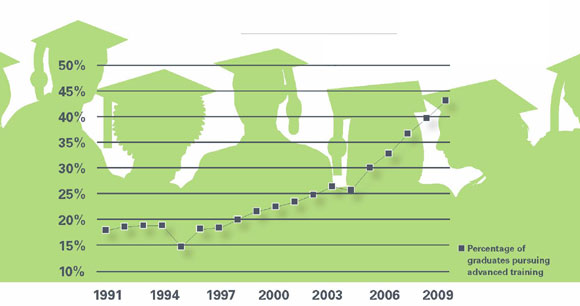 These latest numbers reflect a trend in which increasing numbers of graduates are seeing value in supplementing their veterinary education with additional knowledge, skills, and experience.

Dr. D. Paul Lunn, president of the American Association of Veterinary Clinicians, sees the development as a good thing. "It reflects the continuing maturation of the profession," Dr. Lunn said, "and the realization that more education, more advancement, and more complex training can not only be hugely satisfying for all our graduates, but is also very positive for the veterinary profession and animal health in North America."

According to the most recent AVMA survey, nearly three-quarters of respondents entering advanced education indicated they had accepted an internship in private practice. A quarter had accepted academic internships. A small number of graduates had either accepted a residency or were pursuing a doctorate or other advanced degree.

Most internships are in companion animal medicine, followed by, in order of participation, equine, exotic or zoological animal, food animal, and mixed animal medicine, with the remainder involving other specialties, the 2009 survey found.

Dr. Roger B. Fingland is director of the Veterinary Internship and Residency Matching Program—a computer program that is the primary vehicle for placing veterinarians in internships and residencies in the United States. Dr. Fingland, who heads up the Kansas State University Veterinary Medical Teaching Hospital, says VIRMP data also indicate the trend toward advanced training among recent veterinary graduates.

For instance, in 1989, 456 applications were submitted for 186 internship openings listed in the VIRMP, according to Dr. Fingland. By 2009, that had risen to 1,104 applicants for 850 program slots. On the residency side, 378 veterinarians applied for 156 openings in 1989. Twenty years later, 810 applications were received for 247 residency openings.

Most internship programs in the VIRMP system are in private practice, Dr. Fingland noted.

The VIRMP has been around since the early '80s, according to Dr. Fingland, and has gone through multiple upgrades. "Through the years, the computer program has been refined, and now we have great confidence that the program we use provides the best possible match between candidates and programs," he said.

While there are no hard data identifying what's driving recent veterinary graduates into advanced education programs, the conventional wisdom is these new veterinarians are motivated by one or more of the following factors: feelings of inadequacy, a desire to boost clinical proficiency, and increased earning potential.

Students have so much to learn within the span of a four-year veterinary degree program, according to Dr. Marguerite Pappaioanou, executive director of the Association of American Veterinary Medical Colleges, that some may feel a sense of inadequacy about entering the workforce.

"By and large, as students are coming to the end of their veterinary school curriculum, many feel unprepared to be, essentially, on their own and feel the need for additional training," Dr. Pappaioanou said.

Before Dr. Jeanne E. Ficociello graduated from the University of Pennsylvania School of Veterinary Medicine in 2006, she had planned on returning home to Massachusetts for a life as a general practitioner. Many of her classmates were going into internships after graduation, however, and Dr. Ficociello figured a yearlong internship was a good investment in her career.

"After veterinary school, I felt like I had a good grounding, but as a general practitioner, I wouldn't have been totally prepared," she said. "I felt there was so much more to learn, and I was just starting my career, so I wanted my first year to be really good, really formative, to form good habits, and be in a place with a culture of mentoring."

Uncertainty about the ability to cope with the demands of practice is nothing new. Dr. Daryl D. Buss, dean of the University of Wisconsin-Madison School of Veterinary Medicine, said such was the case when he was a veterinary student. Today, a general awareness exists within the profession that a DVM/VMD degree is an entry-level degree, he said, so internships and residencies are increasingly popular ways of supplementing the skills, knowledge, and competencies learned in veterinary school.

This is a phenomenon Dr. Buss has witnessed at Wisconsin, where over the past five years, surveys of new veterinary graduates have found the percentage accepting positions in advanced education has varied from a third of the class to as high as half the graduates. "That's significant by any way you would choose to measure it," he commented.

Dr. Buss doesn't believe feelings of inadequacy alone can account for the shift toward advanced training. He thinks many veterinary graduates sign up for internships and residencies as a means of equipping them to practice at a higher rate of proficiency. "They want that extra information that's above and beyond what the DVM alone is able to provide," Dr. Buss said.

Internships are typically the first step on the road to specialization, which translates into higher earning potential. According to the 2009 AVMA Report on Veterinary Compensation, the median income for a board-certified veterinarian in companion animal exclusive practice was $145,000 in 2007—the most recent data available—whereas a nonspecialized veterinarian in the same practice earned $91,000.

Higher income is an important consideration for veterinarians, especially when the mean educational debt load among veterinary graduates with debt in 2009 was $129,976, an 8.5 percent increase from 2008, according to the AVMA. The Association also found that a third of 2009 graduates indicated their intention to earn board certification from an AVMA-recognized specialty.

Is the rise in advanced education enrollment a signal to academia that major changes are needed in the veterinary curricula? Dr. Lunn, who, in addition to being AAVC president is head of the Department of Clinical Sciences at the James L. Voss Veterinary Teaching Hospital at Colorado State University, wonders whether internships will one day be a requirement.

"Are our students sending us a message, and are the practitioners who employ them, that an additional year of formally mentored education could, in time, be viewed as a requirement before young veterinarians would feel comfortable, and we would feel comfortable giving them full license to practice?" asked Dr. Lunn, who readily admits he doesn't have the answer.

The North American Veterinary Medical Education Consortium, which was created to reshape veterinary education in the United States, may shed some light in this area. Relatedly, the AVMA and AAVMC have convened the Task Force on Veterinary Internships. The group is charged with reviewing the overall quality of veterinary internships, which, unlike residencies that are typically associated with academic institutions, are not subject to oversight.

Dr. Ficociello says she got everything she wanted from her internship—clinical and managerial training, mentorship, and a decent quality of life, despite the typical 70- to 80-hour workweek. But she knows veterinarians who suffered through "awful" internships and were essentially free labor.

"They're worked like dogs, and they become bitter," Dr. Ficociello said. "I've seen it ruin people in terms of they don't want to be vets anymore."

Dr. Fingland, who was asked to serve on the AVMA-AAVMC task force, explained that the VIRMP serves a listing and matching function; it does not evaluate programs. Programs that have violated VIRMP rules, such as by misrepresenting themselves, have, however, been sanctioned, which involves a three-year banishment from the program. Applicants who didn't honor their agreement to a particular program were likewise expelled, according to Dr. Fingland.

Dr. Ficociello recommends that soon-to-be graduates thoroughly research a prospective internship before committing themselves. "An internship is a really great idea, but it's not worthwhile unless it's a good fit," she said. "Not all internships are created equal."