Is it ethical to keep animals in zoos? 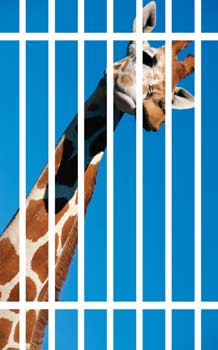 Is the idea of the zoo as an ark archaic? Are zoos exploiting animals for profit? Are they prisons for wild animals? Does the need for species conservation outweigh the costs to individual animal welfare? These are some of the question zoos face as they try to respond to the criticism from animal rights groups and justify their existence to a public increasingly concerned about the welfare of captive animals.

Michael Hutchins, PhD, director and William Conway Chair of the Department of Conservation and Science for the American Zoo and Aquarium Association, addressed these questions in his presentation "In defense of zoos and aquariums: The ethical basis for keeping wild animals in captivity" at the 2002 AVMA Animal Welfare Forum in Milwaukee Oct.11. The forum was co-sponsored by the American Association of Zoo Veterinarians.

According to Dr. Hutchins, one of the problems reputable zoos and aquariums face is guilt by association. He explained that there are really two kinds of zoos: AZA-accredited zoos, and zoos that don't meet AZA standards. Of the 2,400 animal exhibitors licensed by the Department of Agriculture, fewer than 10 percent meet AZA standards for accreditation, Dr. Hutchins said.

A question of ethics

Despite the high standards of AZA zoos and aquariums, some individuals object to zoos on an ethical basis.

Some people believe that animals have an intrinsic right to liberty and, therefore they conclude all zoos are inherently wrong, Dr. Hutchins said. Others are concerned that living in a zoo diminishes animals' quality of life, that captive breeding is of limited value, or that entertainment is not a sufficient justification for keeping animals in captivity.

To satisfy these concerns, zoos and aquariums have to weigh the costs and benefits.

"The central question we need to answer as caring people is: do the benefits of accredited zoos to society outweigh cost to individual animal welfare?" Hutchins said.

The primary benefits zoos provide to society are education and conservation of species and habitats, he said.

"I think the central ethical justification for zoos and aquariums in the modern world is their commitment to conservation," Dr. Hutchins said.

He explained that, during the past decade, zoos have shifted their focus from preserving species through captive breeding programs to preserving habitats and species in the wild.

By studying animals in captivity and applying that knowledge to their husbandry, zoos can provide valuable and practical information that may be difficult or impossible to gather in the wild.

"We need to know about the biology of animals to conserve," Dr. Hutchins said.

Zoos also help by participating in collaborative efforts with other zoos and conservation groups, or directly supporting a wildlife reserve by contributing expertise, training, funding, and other resources.

The AZA tracks the conservation efforts of member zoos with biennial reports on conservation science. According to the most recent report, AZA members participated in or supported 1,400 field conservation projects worldwide, and over 300 projects in North America between 1999 and 2000.

Conservation alone is not enough to justify the existence of zoos, Dr. Hutchins said, "A strong commitment to individual animal welfare is equally important."

To improve animal welfare, AZA-accredited zoos and aquariums must ensure quality care, promote natural behaviors and natural environments, assess and improve their training and education programs, and address the problem of surplus animals, Dr. Hutchins said. They also must reach out to nonaccredited zoos and promote high-quality care for all captive animals, he said.

The AZA is taking a number of steps to promote improved animal welfare at accredited and nonaccredited zoos and aquariums, including:

Outreach to substandard zoos has been a priority; in fact, the AZA Roadside Zoo Task Force helped develop model state and local legislation to close the worst facilities.

"By reaching out in this way, AZA zoos and aquariums are demonstrating their concern for animal welfare outside their realm," Dr. Hutchins explained.

Dr. Hutchins concluded his presentation by stressing the importance of advancing both conservation and animal welfare.

"I think having these dual goals of animal welfare and conservation provides a strong ethical justification for zoos and aquariums."