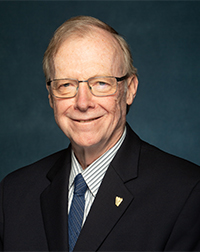 Dr. Richard Sullivan grew up in southern Wisconsin on a family dairy farm participating in 4-H and FFA programs through his first years in college. He attended Wisconsin State College, Platteville, for two years and then graduated from Purdue University School of Veterinary Medicine. After spending two years and four months in the Peace Corps in Mato Grosso, Brazil, as an extension veterinarian, he returned to settle in Torrance, Calif., while his wife, Connie, finished her DrPH in epidemiology at UCLA. After four years as an associate, an opportunity to buy into the practice came along and he and Connie decided to stay in California and raise their family there. They have one daughter and two sons; one son is also a veterinarian.

He became part owner of the community emergency clinic and was soon elected to its Board of Directors, which he served on for 30 years.

After a time as co-owner of the practice, Richard ran for a position on the Southern California Veterinary Medical Association’s Board of Trustees, including serving as president. He then become a member of the California Veterinary Medical Association’s Board of Governors, also serving as its president. He served on numerous committees, including being chair of its Legislative Committee and serving as chair of its Animal Welfare Committee for four years. He is still a member of both of those committees.

Richard became active in the AVMA by serving on its Judicial Council and on the State Advocacy Committee, and was on one of the working groups tasked with developing material for the AVMA’s position on telemedicine and telehealth. He was California’s alternate delegate to the AVMA House of Delegates for eight years and then served another eight years as the delegate representing California.

Richard also became interested in the California Veterinary Medical Board, first being elected by the medical board to serve on its Multidisciplinary Advisory Board (MDC) and then by being appointed to the medical board by Governor Jerry Brown and serving for six years. He is now back on the advisory board.