In light of recent news related to the proposed creation of new U.S. veterinary schools, the American Veterinary Medical Association’s Economics Division conducted an economic analysis of how the veterinary workforce and, more specifically, the market for veterinary education may be affected by expanding the number of seats available to veterinary students. This analysis is a reflection of the AVMA’s appropriate role as the national association representing the interests of its members. It does not take an opinion on the merits of the addition of new veterinary schools.

In one of my former roles of advising foreign governments and agencies on small-business development, I would always begin with three basic prerequisites that I feel are most important and need to be answered before starting a new business. First, can you physically do it? Second, can you make money doing it? And third, can you sustain it in a competitive market?

The continued push to expand the number of veterinary schools ( and thereby the number of seats available to veterinary students) certainly has me wondering whether all of these basic prerequisites are being considered in the planning process and before commitments are made to pursue the necessary approvals and begin the accreditation process. There is no doubt that the necessary resources, both in terms of capital and expertise, to build new veterinary colleges can be acquired anywhere in America. Based on current information about the willingness of veterinary college applicants to pay for the veterinary degree, new colleges can probably be profitable, more so if they are state-funded. 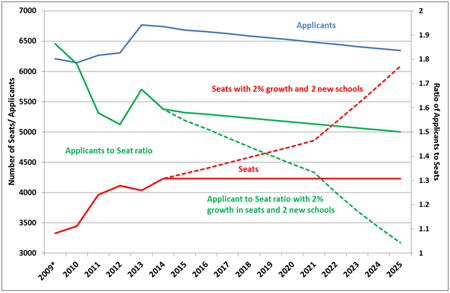 As the cost of education continues to climb, and as college students become increasingly knowledgeable of the financial hardships associated with the profession’s high debt-to-income ratio, this applicant-to-seat ratio is forecast to decline even with a constant number of available seats through 2025.

However, if the rate of increase in the number of seats at existing schools continues the long-term trend and two new schools are added, then the combination of new seats and declining applicants will bring the applicant-to-seat ratio to an estimated 1.04:1 by 2025. While this is likely to be a worst-case scenario, the competitive environment at veterinary schools is currently increasing from highly competitive to extremely competitive; veterinary schools will in the near term have to compete for students. With the addition of even more seats, the market for veterinary education would become a buyer’s market, meaning that each applicant (the buyers in this case) would face less competition for seats at veterinary colleges (the sellers in this case).

Based on our modeling, there is a threshold value for tuition costs that the average student is willing to pay; above that threshold, the number of applicants decreases, and recent analysis has shown that this threshold may be declining. Those schools whose total costs fall in the top 20th percentile are currently above that threshold. The bottom line here is that unless a new school can provide a veterinary education at a cost to students at or below the threshold in this increasingly competitive market, a veterinary degree program will not likely be sustainable. This analysis assumes that no change from the baseline occurs in the applicant pool. But because the applicant pool will be adversely impacted by an increasing debt-to-income ratio, this assumption likely won’t hold. Therefore, what is presented is essentially a conservative scenario. 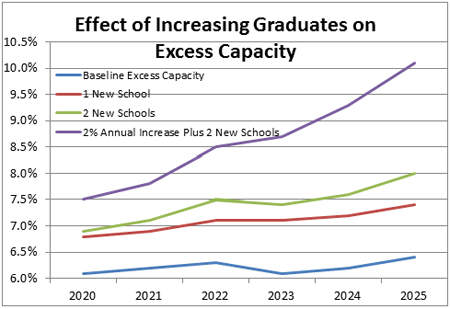 The starting salaries of veterinarians will likely be adversely impacted by an increase in the number of graduates. The longer-term trend has been that for every 100 students, 39 take a full-time position at graduation; this modeling is based on the AVMA Senior Survey reports for full-time positions accepted at the time of graduation, and does not include those who accepted part-time employment, internships, residencies or additional education, as well as those who accepted full-time positions after the survey was completed. The addition of 100 students above our baseline projection would potentially reduce annual income for each new veterinarian (1,298 in the class of 2015) by $500, and the combined effect of two new schools and a 2 percent growth rate in existing school class sizes would potentially lower starting salaries by over $3,000 per year per veterinarian by 2025. This decline in income would exacerbate the existing disparity between growth rates in income and debt, causing the debt-to-income ratio to rise. The rising debt-to-income ratio will likely accelerate the reduction in applicants, perpetuating the potentially negative effects on the market for veterinary education. 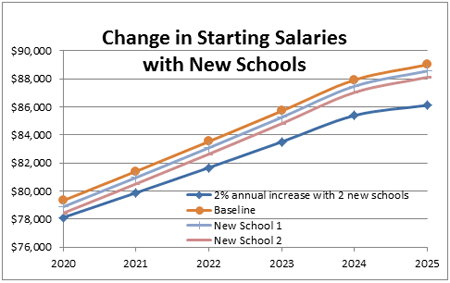 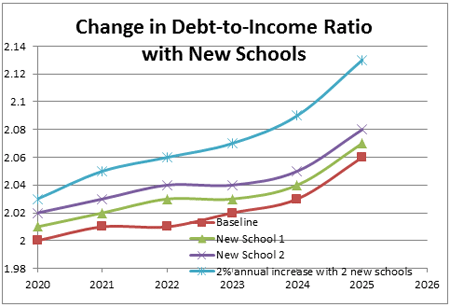 All of these factors point to an increasingly competitive market for the colleges of veterinary medicine, greater competition for employment and higher debt-to-income ratios for graduates, all other factors being equal. Whether new schools can sustain their programs under this increasing competition will depend on their ability to produce graduates at a cost less than those currently doing so, or producing graduates with a greater ability to increase the demand for veterinary services.