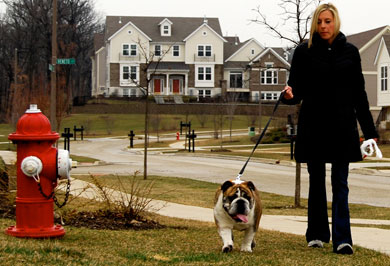 People attending dog social events can be at risk of zoonotic diseases, which are diseases that spread from animals to people. Some of these diseases can be spread directly from dogs to people, while other diseases may come from the environment where the dog social gathering is taking place.

Cryptosporidiosis is caused by a single-celled, microscopic parasite that lives in the intestines and can be present in high numbers in the stool of infected animals or people. It is generally spread by the fecal-oral route, meaning that a person or animal comes in contact with the stool (or a surface or soil contaminated by the stool) of an infected animal or person then touches their mouth or eats or drinks something; often, the person can't see their hands are contaminated, and they accidentally eat the parasite and become infected. Infection can also come from swimming in or drinking contaminated water. People infected with Cryptosporidium may develop stomach cramps, diarrhea, vomiting and fever.

Dog bites are always a risk when people and dogs come together. Most people are bitten by their own dog or a dog they know. At dog gatherings, people may be bitten when they try to break up a dog fight. Prevention is the best method for avoiding dog bites. Socialize your dog and train it to be obedient. Neutered and spayed dogs are less likely to bite. Be a responsible dog owner and be careful around unfamiliar dogs.

All dog bites should be immediately cleaned with soap and water and the rabies vaccination status of the biting dog should be determined. If bitten, consult your physician. Some states require animal bites to be reported to local health authorities, so be sure to notify them as well, if necessary.

People can be infected by several species of tapeworms. Echinococcus multilocularis and Echinococcus granulosus can infect people who come into contact with the infected animal's stool (or anything, including the animal's fur, that is contaminated with stool). The symptoms of disease vary with the type of worm, but can include respiratory or digestive problems.

Just like their dogs, people can become the victims of fleas, ticks and Cheyletiella mites. Itching and bumps with dark/blackened centers may occur with Cheyletiella infestation. Flea bites cause itching and raised, reddened skin. In certain parts of the U.S., certain types of fleas can carry diseases such as plague. Ticks are capable of transmitting tick-borne diseases such as ehrlichiosis, babesiosis, Lyme disease, Rocky Mountain Spotted Fever and others.

People can also become infected with the mange mite that causes sarcoptic mange in dogs and develop itchy, reddened skin.

Human infections with hookworms and roundworms usually occur when a person accidentally eats the larvae (for example, the person may handle infected soil or an infected dog and then eat without washing their hands) or when the larvae burrow through the person's skin.

Hookworms can cause severe itching and tunnel-like, red areas as they move through the skin. If they are eaten, they can cause intestinal problems.

Like their dogs, people can be exposed to the fungal organisms that cause histoplasmosis, blastomycosis, cryptococcosis and coccidioidomycosis. Inhalation of fungal spores is the most common route of infection in people. The symptoms may include flu-like or pneumonia-like symptoms, chest pain, fever, coughing, headache, skin rash or muscle aches. Immunosuppressed people are at the highest risk of infection and illness.

Any outdoor activity that occurs during mosquito season puts people at risk of mosquito bites and mosquito-borne diseases such as West Nile Virus and the equine encephalitis viruses. Although these diseases aren't spread from dogs to people, people are at risk of being infected with these diseases any time they are outside during periods of mosquito activity. The symptoms caused by these diseases can vary in severity, but include fever, headache, neckache, flu-like symptoms, abnormal behavior, seizures, coma and death.

Ticks are capable of transmitting tick-borne diseases such as ehrlichiosis, babesiosis, Lyme disease, Rocky Mountain Spotted Fever and others. The symptoms caused by these diseases vary, but may include pinpoint (or larger) blood spots on the skin and rashes, joint pain, muscle ache, fatigue and headache.

People who swim in water frequented by any animals (or people, for that matter) can be exposed to water-borne diseases such as Cryptosporidium (covered separately above because it is also spread by contact with the stool of infected animals), Giardia, Shigella and E.coli. The symptoms can vary based on the infection, but can include diarrhea, vomiting and stomach cramps.

People can also develop leptospirosis from exposure to water contaminated with Leptospira-contaminated urine. Symptoms can include fever, headache, muscle aches, diarrhea and vomiting.

Although the possible disease issues to be transmitted from dogs to humans may seem overwhelming, veterinarians are experts on zoonotic diseases and animal-related health hazards. Please consult with your veterinarian if you have questions or need more information about any of the diseases described here. Your veterinarian may also wish to consult with your physician regarding any health issues to ensure that both you and your dog remain as healthy as possible.

The AVMA would like to thank Dr. Robert Belden, Dr. Ron Schultz, the American College of Veterinary Behavior, and the American Veterinary Society of Animal Behavior for their roles in developing this document.

This information has been prepared as a service by the American Veterinary Medical Association. Redistribution is acceptable, but the document's original content and format must be maintained, and its source must be prominently identified.