The Unwanted Horse and Horse Slaughter 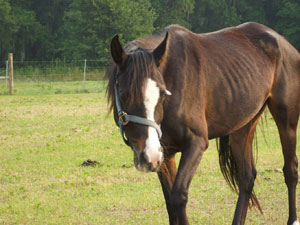 'Unwanted horses' represent a subset of horses within the domestic equine population. These may be healthy horses that their owners can no longer afford to keep or feed; horses that are dangerous to handle and have injured (or are likely to injure) people; horses with an injury, lameness, or illness for which their owners are unwilling to unable to provide care; or horses that are no longer able to perform as their owner desires, whether that be for racing, pleasure riding, or some other purpose. In many cases, these horses have had multiple owners, have been shipped from place to place, and have ultimately been rejected for any sort of responsible, long-term care. Within the horse industry there will always be unwanted horses. If you think about it, whenever a horse is sold, the seller no longer wanted the horse. If the sale is successful then that horse is no longer unwanted, but if not sold the horse remains unwanted.

In 2007 the last US plant capable of slaughtering horses was closed. Prior to this, many unwanted horses were likely sent to slaughter in the United States with a smaller number being rescued, rehabilitated, euthanized or disposed of through rendering, burial, disposal at landfills, or composting. A few were simply abandoned and left to die of natural causes. Since 2007, a substantial and increasing number of horses have been exported to Canada and Mexico for slaughter.

Assuming these numbers are somewhat representative of what occurs annually, then nearly 100 horses either die or are euthanized for every 50 horses that go to slaughter and at least 200,000 equine carcasses must be disposed of annually. Prior to 2007 one third of these were being processed for human consumption, with the remainder being cremated, buried, digested, disposed of in landfills, or rendered.

When the number of unwanted horses is combined with the 30,000 plus feral horses deemed unadoptable that are being maintained by the Bureau of Land Management (BLM) on privately owned sanctuaries, plus the 7,000 to 8,000 horses held in short-term holding facilities operated by the BLM awaiting adoption (temporarily unwanted), plus an unknown but substantial number of horses housed at rescue and retirement facilities waiting for a new owner, one can readily see that the number of truly and/or potentially unwanted horses constitutes a substantial number of horses that must be managed now and in the future.

To their credit, equine welfare organizations, breed-specific organizations, and numerous benevolent equine welfare advocates and horse owners have made a conscientious and concerted effort to either provide care for unwanted horses, provide funding for their care, or find suitable accommodations for them in both the private and public sector. These efforts, along with extensive efforts to inform the public about the plight of the unwanted horse, fewer slaughter plants operating in the United States, changes to the IRS tax code, and a relatively high demand for horses by prospective buyers, presumably have led to a decrease in the number of horses sent to slaughter during the past 5 to 10 years. The carrying capacity for retirement or rescue farms and sanctuaries is currently unknown, but the Unwanted Horse Coalition's 2009 survey revealed that 39% of rescues were at maximum capacity and another 30% were at near capacity at that time. On average, rescues turn away 38% of horses brought to them. Despite the noble efforts of these organizations to provide care for many horses, statistically the number of unwanted horses far exceeds the resources currently available to accommodate them. And, unfortunately, well-meaning volunteers can become overburdened at times to the detriment of the horses under their care. There simply are not enough volunteers, funding, or placement opportunities for all unwanted horses and, since the closure of the last US slaughter plant accommodating horses in 2007, the burden has increased substantially. 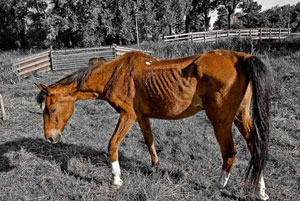 Why are there so many unwanted horses? Is there, as some suggest, an oversupply of horses in the United States today? Was there, then, an even larger oversupply of horses when 200 to 300,000 horses were being sent to slaughter annually in the early 1990s? The horse industry depends extensively on the buying and selling of horses. Without demand from buyers and supply from sellers, the horse industry would not exist. For the past 5 to 10 years, the overall demand for horses has been very good. However this demand runs in cycles that frequently follow other economic trends. In general, when the demand for horses is low, then the number of unwanted horses increases, regardless of what their bloodlines and quality might be. Recent changes in various breed organizations' rules, such as permitting the use of embryo transfer and frozen semen, have favored the breeding of horses, allowing breeders to produce more than one offspring per year from mares, and allowing more efficient selection for horses with desirable bloodlines or performance records. Unfortunately, even with the help of technological advances, not every mating will produce a horse that meets the expectations of a buyer. For those in the business of breeding and raising horses, an unsold horse becomes a liability rather than an asset.

Currently, to the author's knowledge, there is a lack of information about the demographics of unwanted horses. According to United States Department of Agriculture, horses going to slaughter basically follow the demographics of the horse population in general (i.e., nearly equal numbers of mares and geldings, primarily Quarter Horses, followed by the other breeds ranked in order of their relative numbers in the general horse population). A more detailed study of the demographics of horses deemed unwanted would show the horse industry where it needs to focus its efforts. As an example, former racehorses are often singled out as examples of unwanted horses when their racing careers end and they are not candidates for breeding or other athletic endeavors. However, there are undocumented estimates suggesting that fewer than 10% of the horses that go to slaughter are Thoroughbreds. So just how many of the 100,000 plus horses that went to slaughter last year in Canada and Mexico were former racehorses? What is the average age and sex of these unwanted horses? Why were they unwanted? Are they purebred or grade horses? We need answers to these, and other questions, to be able to understand the source of the problem and to work toward reducing the number of unwanted horses.

Two recently published large national surveys of horse owners, trainers, veterinarians, rescue farm operators, and the public, conducted by the American Horse Council suggest that the unwanted horse problem has worsened dramatically during the past three years. The primary reason cited for owner relinquishment of horses is the economy and their inability to afford their horse(s)' care. This has been compounded by the closure of US horse processing facilities, the high cost of euthanasia and disposal, and indiscriminant breeding. One of the more disturbing observations by respondents to these surveys is that the number of horses being abandoned and neglected or abused has increased significantly.

There is no reliable way to document the actual number of instances of abuse or neglect, other than what can be read in the news. Neglect of horses takes many forms and is due to a variety of factors. Could the upsurge in neglect solely be a result of an increasing number of uninformed horse owners unfamiliar with the proper care of horses, or could it be due purely to economic constraints created by the downturn in the economy? Could it be due to lack of access to affordable ways of responsibly disposing of unwanted horses brought about by regulations prohibiting burial of animal carcasses in some locales; costs associated with euthanasia and disposal by cremation, digestion or rendering; and closure of existing slaughter plants processing horses for human consumption? All of these factors must be considered when faced with such a large number of unwanted horses.

What can we do to help ensure horses are treated humanely and with dignity until the end of their lives? There are on-going efforts by some equine advocacy groups to persuade Congress to pass legislation to ban the slaughter of horses for human consumption in the United States as well as the export of horses for this purpose. Corresponding bills have been introduced in the House of Representatives and the Senate. The House of Representatives passed a version of one of these bills in 2006. Despite all of this legislative activity, however, there has been no proposal that would provide for the care of the 70,000 to 80,000 horses that would otherwise be sent to slaughter. If slaughter or transport/export for slaughter is prohibited, what will happen to these horses? Will the owners who don't want these horses suddenly have a change of heart? Will they neglect them or abuse them? If slaughter is banned, isn't it our duty to ensure there is infrastructure in place to protect the welfare of these unwanted horses? It is extremely unlikely that, if slaughter is banned, the problem will simply go away.

The American Association of Equine Practitioners (AAEP) initiated discussions about the plight of the unwanted horse in 2004 by sponsoring an Unwanted Horse Summit in Washington, DC. In attendance were members of the AAEP and AVMA, as well as representatives from the horse industry and breed organizations, animal welfare advocacy groups, the USDA and Congress. Following the Summit, the Unwanted Horse Coalition, comprising veterinarians, horse industry organizations, and animal welfare advocacy groups, was formed to educate horse owners on how to "Own Responsibly" and to develop novel solutions to the problem of unwanted horses. It will be through such collaborative efforts, rather than as a result of divisive proposals, that answers to the problem will be found.