This peer-reviewed summary has been prepared by the American Veterinary Medical Association Animal Welfare Division. While principally a review of the scientific literature, it may also include information gleaned from proprietary data, legislative and regulatory review, market conditions, and scholarly ethical assessments. It is provided as information and its contents should not be construed as official AVMA policy. Mention of trade names, products, commercial practices or organizations does not imply endorsement by the American Veterinary Medical Association.

The tail of lambs is shortened, typically using a constricting rubber band, docking iron (hot blade)1 or a combination of the rubber band and a bloodless castrator,2,3 to reduce fecal soiling1 and fly strike.4   Fly strike is a painful condition caused by blowflies that lay their eggs on the sheep.  The maggots then burrow into the flesh and poison the sheep with the ammonia they secrete. As the sheep’s skin becomes irritated, additional flies are attracted to the site.  A sheep can die within three to six days of onset of fly strike.5   Though tail docking has not been shown to consistently improve growth rate, studies have shown that tail docking can increase feed efficiency, reproductive capacity, live weight gain, and heat stress tolerance.6

Tail docking induces considerable discomfort in young lambs.5 Short docking of the tails of lambs has also been linked to increased incidence of rectal prolapse.
Short docks—Docking of the tails of show animals may sometimes involve amputation of the entire tail to give a fuller appearance to the rump (short docking).
Three large studies tracked the incidence of prolapse in lambs whose tails were docked at different lengths. Those whose tails were docked at the end of the caudal fold had a significantly lower incidence of prolapse than those whose tails were short docked, but the effect was small, partly due to a low overall incidence of prolapse (1% vs. 6%, rd=.05 z=6.1, p<.0001).8,9,10
Other factors have also been implicated in the incidence of prolapse including raising in feedlots11, coughing, and sex (females at higher risk).12,13  The appearance of short docks increasing risk of prolapse may be a result of  these confounding variables.8,9,14,15   Nevertheless, a minimum length of tail to qualify for showing has been proposed11 and implemented in some states. The appropriate length for docking is variously expressed as visibility  of 0.7 inches of tail, docking at the third or fourth coccygeal vertebrae, or docking at the end of the caudal fold/hairless under-tail area. 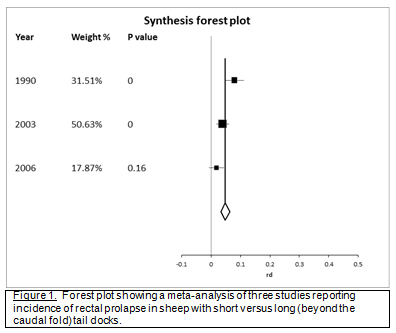 Rubber ring—One technique for docking tails is use of an elastrator to apply a tight latex band (rubber ring docking).  The use of latex bands produces highly variable responses, not only among lambs, but within the same animal if the band is removed and then replaced.  Rubber ring docking produces highly variable levels of pain within the first hour after application.5,12,17 Pain is typically estimated to be mild18  or moderate based on abnormal postures and behaviors indicating discomfort.12,13 This suggests that some band placements are more painful than others.  For example positioning a band on the vertebra might be expected to be more painful than positioning one over an intervertebral space.5   Cortisol concentrations in blood may also be elevated.12 The ring subsequently produces an inflammatory lesion and sloughing of the tail (most slough by 28 days after rubber ring placement15), which may be associated with a longer term pain response.  Docking with a rubber ring, however, does not typically affect live weight gain.19

Hot blade—The hot blade method involves severing the tail and cauterizing it, using a heated anvil scissor docking iron.  The cut end of the tail is held against the heated blade for approximately 1 second to improve hemostatis.3 Tail docking performed with a heated docking iron has been shown to produce levels of pain behavior and blood cortisol concentrations that are not significantly different from handled lambs whose tails are not docked.3

Genes associated with short tails exist in sheep and offer a potential alternative to docking, via selective breeding toward a tail of the desired length.21  Fly strike might also be managed in some cases by removal of fleece (i.e. crutching) and increased application of chemical preventatives (i.e. jetting).  However the use of a slow release capsule of a benzamidizole (albendazole) was not found to be as effective as docking in preventing flystrike.1

Fly strike is a cause of serious suffering in lambs.  Subjective monitoring of behavioral responses and objective monitoring of cortisol concentrations in blood indicate there is pain and distress associated with tail docking, no matter the technique used.  Short-docked tails have been associated with increased incidence of rectal prolapse in some studies.  Though there is pain associated with tail docking, fly strike can lead to discomfort, pain and eventually death of the lamb.
The Farm Animal Welfare Council (FAWC) recommends that docking should be avoided whenever possible.22 The FAWC also concluded that tail docking of lambs up to 7 days old is best done with a rubber ring; that lambs between the ages of 1 and 8 weeks old should be docked with a docking iron (hot blade) or a clamp; and that acute pain of tail docking can be alleviated using locally applied anesthetics.18