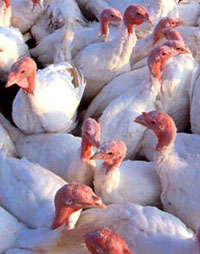 Q: What is avian influenza?

A: Influenzas are broadly divided into three types: A, B, and C. Type A influenza includes most human and all avian influenza (AI) viruses. Avian influenza is a virus that is naturally found in waterfowl and some species of shorebirds. Influenza viruses are divided into subtypes based on the two proteins, hemaglutinin (H) and neuraminidase (N), that are found on influenza surfaces. There are 16 recognized H types, and 9 N types recognized in avian species, and these are known to occur in a number of different combinations.

Q: How is avian influenza transmitted?

A: Avian influenza is most often spread by direct contact between infected birds and healthy birds. It may also be spread indirectly through contact with contaminated equipment and biological secretions and/or excretions. The avian influenza virus is found in secretions from the nares (nostrils), mouth, and eyes of infected birds and is also excreted in their droppings (excreta). Contact with contaminated droppings is the most common means of bird-to-bird transmission, although airborne secretions are another important means of transmission, especially within poultry houses. Droppings from wild ducks can introduce avian influenza into domestic flocks raised on range or in open flight pens.

The spread of avian influenza between poultry facilities almost always results from the movement of infected birds or contaminated people and equipment (including clothing, boots, and vehicles). Although more pathogenic strains of avian influenza virus can completely suppress egg production, the less pathogenic strains of the virus can be found on the inner and outer surfaces of egg shells; however, this has never resulted in hatchery transmission. Airborne transmission of avian influenza virus from farm to farm is highly unlikely because the virus cannot travel long distances through the air and it is susceptible to the effects of sun light and drying.

Influenza viruses that are considered to be highly pathogenic avian influenza can be spread from birds to people as a result of extensive direct contact with infected birds, such as during home slaughter or defeathering of infected poultry. Public health concerns center around the potential for the virus to mutate or combine with other influenza viruses to a form a new strain that could easily spread from person to person.

Q: Can animals "shed" the virus before clinical signs are observed?

A: "Shedding," as it applies to viruses, means that the animal's secretions and/or droppings contain viral particles that may infect other animals or people. Some animals (i.e., growing poultry) rapidly show clinical signs of disease and simultaneously shed virus. Other animals, including some species of waterfowl, may appear clinically healthy, but are shedding the virus, which is the reason that surveillance of waterfowl for early detection of influenza viruses along the major flyways is an important measure to prevent outbreaks of disease in commercial poultry. The incubation period is the time that passes between when the bird first gets infected and the appearance of clinical signs of disease. The incubation and shedding periods for avian influenza virus in many species are not known.

Q: How stable are avian influenzas in the environment?

Q: Can I get avian influenza from eating poultry or eggs?

A: You cannot get avian influenza from eggs and poultry products that have been prepared and cooked properly. Always store poultry products and eggs according to directions on the package. Regular precautions should be used when preparing poultry. First, do not rinse poultry products before cooking them, as this can spread pathogens that may be found on the raw product. When you are ready to use poultry products, cook them to an internal temperature of at least 165° F. Eggs should be cooked until the yolks and whites are firm.

Remember that anytime you handle raw poultry or egg products, you should wash your hands for 20 seconds in warm running water with soap. Be sure to wash cutting boards and utensils thoroughly and avoid their contact with other foods until they are cleaned and dry. Additional information can be found at foodsafety.gov.

Q: Should I be concerned about avian influenza viruses causing a problem for people in the United States?

A: Be aware, but not overly concerned. Currently, federal and state avian influenza surveillance programs are in place for wild birds and poultry, and these programs are key to early detection of novel strains that could be problematic for animals and/or people. This surveillance by veterinarians, animal health officials, and industry are critical, because early detection can help prevent novel influenza viruses from becoming transmitted to, and established, in people. There is also international sharing of surveillance data, which keeps veterinarians and animal health officials informed about emerging novel strains around the world. Multiple safeguards are in place to monitor avian influenza in commercial bird flocks, for example, in most instances samples from commercial poultry flocks are routinely analyzed at diagnostic laboratories for antibodies against avian influenza, as authorized by the National Poultry Improvement Plan (NPIP) before slaughter to be tested for avian influenza. In this way even the low pathogenicity strains of avian influenza can be detected before the birds are sent to slaughter. Additionally, modern production facilities are designed to minimize the likelihood of spread between flocks should infection occur. Poultry maintained outdoors is at somewhat higher risk due to their potential for exposure to waterfowl and other wild birds that may be carriers of avian influenza viruses.

Other potential sources of infection, like live bird markets (retail stores where customers can purchase live birds that are then slaughtered, dressed, and packaged on site) are closely monitored for the presence of avian influenza by federal and state surveillance programs.

Everyone, including pet owners, should be aware of the potential of novel influenza viruses to cause disease and death, as well as how influenza can be transmitted. Although the CDC has not recommended that the public avoid travel to currently affected countries, it is recommended that people avoid poultry farms, bird markets, and other places where live animals are kept in countries where outbreaks have occurred. For additional information, see the CDC's information about avian influenza for travelers.

Remember that the CDC Advisory Committee on Immunization Practices (ACIP) also recommends that everyone 6 months and older be vaccinated annually against seasonal influenza.

Q: What is being done to stop avian influenza from spreading in birds?

A: In situations where highly pathogenic avian influenza (HPAI) infects poultry, the birds are destroyed by properly trained and protected crews “on site” to reduce the risk of infecting other birds and to minimize human exposure. Note that chickens and turkeys do not recover from infection except in very rare cases. The U.S. maintains an indemnity program that has helped minimize losses to poultry producers and encouraged their participation in surveillance activities. Awareness of avian influenza virus has been heightened, and education has become a priority in affected areas around the world.

The USDA recognizes the potential threat to human health and has therefore increased its surveillance and control efforts to detect HPAI and, if/when found, contain and eradicate HPAI in domestic poultry. More information about USDA's efforts and response to avian influenza in the United States is available at https://www.usda.gov/topics/animals/one-health/avian-influenza and https://www.cdc.gov/flu/pandemic-resources/index.htm.