What has been the impact of COVID-19 to our economy and what can we expect next? Large-scale shelter-in-place orders travel restrictions, and social-distancing measures have resulted in a sharp fall in consumer and business spending. We can anticipate these patterns will continue for some time. It’s hard to predict how long the downturn will last, or whether it will bring a full-blown recession, but there’s reason to be optimistic about an eventual recovery.

We already have seen the most immediate impact of COVID-19, with 6.6 million Americans filing for unemployment benefits as of the week ending March 28, 2020. The figure is the highest ever reported, beating the previous record of 695,000 claims set in 1982. 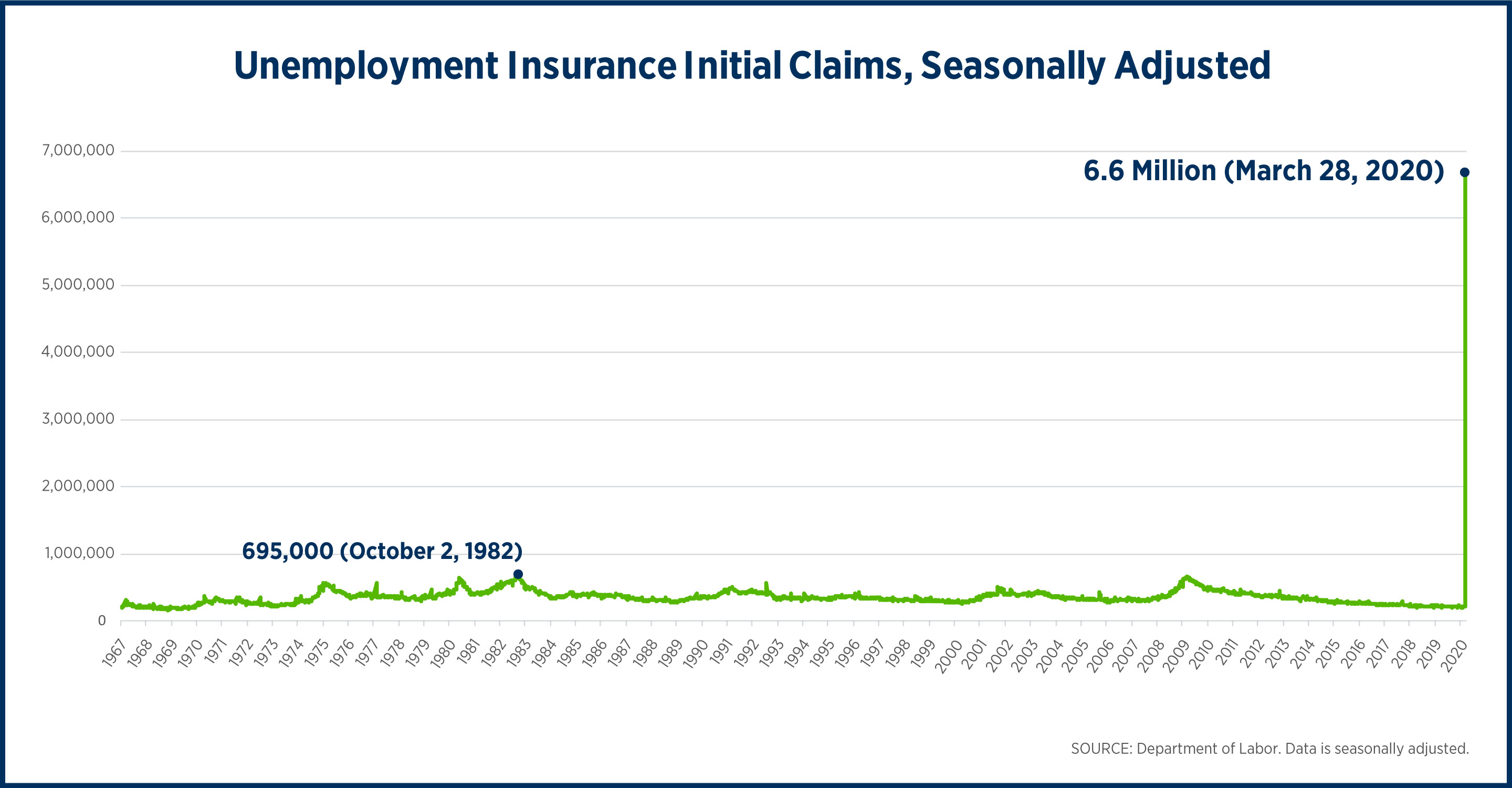 It’s important to understand that this unemployment spike isn’t the result of systemic economic factors, but rather is the result of pandemic factors. In other words, this didn’t happen because of a change in economic fundamentals like consumer demand or international trade. Instead, orders to shelter in place and social distance have resulted in businesses closing and people staying at home.

Right now, over 37 million jobs—more than 25% of all jobs in the United States—are at high risk of being lost due to COVID-19. This number can increase depending on decisions that we make as a country. As people are no longer leaving their homes, let alone meeting in restaurants, movie theaters, or at the mall, some industries have lost a significant portion of their income virtually overnight. The result is a huge, rapid, ongoing loss of purchasing power in the U.S. economy. This is utterly unprecedented in a major modern economy outside of wartime.

When will our economy bounce back and what does that other side of COVID-19 look like? As explained in a recent Harvard Business Review article, economic recovery will either be shaped like a V, U, or L which corresponds to best-, middle-, and worst-case scenarios.

V-shaped: This is the “best case scenario.” Think of it as a bad paper cut. It is sharp, it hurts like heck, it bleeds. But it heals quickly with no scarring. While GDP level (top part of figure) dips for a period of time, we return to trendline. In addition, even though economic growth takes a hit (red triangle), it rebounds with a vengeance (green triangle), and the net effect is zero on productivity. It is very optimistic, but possible.

U-shaped: This is the middle scenario. Let’s refer to it as a busted knee cap. It makes a paper cut look mild, but this is still healable, though there will be some permanent damage. In this case, even though GDP level resumes its pre-event trajectory, there is a permanent loss of output (top part of graph). Economic growth or productivity is not hurt in the long-run. This is a lot like the 2008 Recession and is very plausible.

L-shaped: This is the “worst case scenario”—a decapitating blow to our economy. In this scenario, our economy gets past the pandemic but both economic output (GDP level) and economic productivity (GDP growth) is irrevocably injured. For this to happen, the pandemic has to cause something in our economy to break and inflict structural damage. Examples include a permanently depressed labor market or dampened worker productivity. This is a very pessimistic scenario, not unlike the Great Depression, and is unlikely but not impossible.

Knowing these scenarios provides a window into the future of our economy and how it will impact your practice. Equipped with this information, the Harvard Business Review article suggests:

The impact on the unemployment rate will be large, regardless of the scenario. The Conference Board—an economic research company and leading business authority—recommends four economic strategies to mitigate the potential “worst-case” effects on the economy:

While a recession—strictly defined as when an economy contracts for a period of six months or more in a row—is a highly probable outcome here, it is not necessarily a forgone conclusion. Still, regardless of the shape of the recovery and ensuing economic contraction, there will be significant economic losses. Our economy has not seen contractions of this kind on a quarterly or annual basis since the aftershock of World War II.

What does this mean for veterinary practices?

The industry tracker from VetSuccess gives a really clear window into what’s happening to veterinary businesses. The VetSuccess data covers over 2,500 practices in a nationally representative sample. Using a seven-day rolling average to smooth out variability from the practice data, the data are showing as of the week ending April 4, 2020:

What does this translate to overall? Primarily it means that Q2 will witness extreme declines in business revenue across all areas of the economy, and veterinary medicine will not be immune. While hard numbers are difficult to pin, declines in the range of 15-40% are possible. Recovery is a possibility in Q3, depending again on the duration of containment and mitigation efforts to control the pandemic.

In the meantime, any business would be best served by preparing for the worst-case scenario, while advocating for policies and interventions that push for a quick recovery.