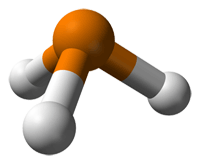 In April 2010, the Michigan Department of Community Health1 notified the AVMA of two situations where veterinary personnel were affected during the treatment of dogs that had ingested zinc phosphide rodenticide pellets; it is suspected that human exposure resulted from the release of phosphine gas into the examination rooms when the dogs were induced to vomit. Manuscripts in the Equine Veterinary Journal2 in 1996 and in the Journal of the American Veterinary Medical Association3 in 2010 reported that several individuals became ill associated with the veterinary treatment of horses with phosphine poisoning.

Zinc phosphide is a common component of rodenticides for home and commercial use, and aluminum phosphide is commonly used in agriculture as an insecticide for the fumigation of grains and animal feed. Both products liberate phosphine gas, which is highly toxic to animals and people.

Animals can be exposed to the toxic effects of zinc phosphide when they eat rodent bait containing the product. Trade names of zinc phosphide-containing rodenticides include Arrex, Denkarin Grains, Gopha-Rid, Phosvin, Pollux, Ridall, Ratol, Rodenticide AG, Zinc-Tox and ZP. Horses and other livestock can be exposed to aluminum phosphide if they are fed animal feeds that have not been appropriately treated or withheld prior to distribution. With proper application and appropriate withholding periods (the time between treatment with the aluminum phosphide and packaging and distribution of the animal feed), the risk of phosphine gas exposure to people or to animals (other than the pests in the fumigated feed) is minimal.

Clinical signs of phosphine poisoning in animals can occur within minutes to hours of ingestion of a toxic dose, and include loss of appetite, nausea, vomiting (which may be bloody), abdominal pain, diarrhea, lethargy, incoordination, convulsions, paralysis, coma and death. As little as one tablespoon (15 ml) of zinc phosphide pellets can produce toxicity in a 10 kg (22 lb.) dog.4 Once clinical signs of poisoning are observed, the prognosis is guarded at best. Clinical signs of liver or kidney injury can occur 48-72 hours after exposure to the toxin.4

Symptoms of phosphine intoxication in people include headaches, shortness of breath, nausea, vomiting, and dizziness. More severe symptoms, including gastrointestinal and respiratory distress, convulsions and death, can occur with severe phosphine poisoning. Veterinarians, veterinary staff and animal owners who handle animals with phosphine poisoning can also be affected and sickened by phosphine gas.

Agency for Toxic Substances and Disease Registry
ToxFAQs for Phosphine