The state of veterinary well-being, the resilience of the animal health industry, and the universality of the human-animal bond were among the topics featured at the 2022 Veterinary Meeting & Expo.

The North American Veterinary Community welcomed more than 15,000 attendees to VMX 2022 from Jan. 15-19 in person in Orlando, Florida, or virtually. Almost 13,000 participants attended the conference in person.

During the meeting, Merck Animal Health released findings from its third well-being study, conducted by Brakke Consulting in collaboration with the AVMA to examine the well-being and mental health of U.S. veterinarians (see story).

Also at VMX, Brakke Consulting presented its 2022 Animal Health Industry Overview to offer an update on the animal health industry, including veterinary medicine, and a look at monoclonal antibodies. The Human Animal Bond Research Institute and Zoetis shared results of an international survey on the human-animal bond, which found that 95% of dog and cat owners worldwide consider pets to be family. The NAVC launched its Veterinary Nurse/Technician Empowerment Initiative, aimed at elevating and advancing credentialed veterinary technicians.

In addition, Banfield Pet Hospital and the NAVC released their annual Veterinary Emerging Topics Report, focusing this year on how to improve safety and quality in veterinary practice (see sidebar).

Dr. Bob Jones, president of Brakke Consulting, spoke about the performance of the animal health industry in 2021. He summarized the situation as follows:

In an analysis of companion animal practices, Brakke noted the return to the conventional appointment model. Surveys by Brakke found that 88% of practices allowed clients to bring pets inside the clinic in 2021, up from 21% in 2020. These type of appointments increased from 17% to 70% of all appointments.

The percentage of practices offering curbside or drop-off service, with clients not coming inside the clinic, dropped from 88% to 73%. These type of appointments decreased from 76% to 27% of all appointments.

In other developments, Brakke believes monoclonal antibodies will change animal health. Uptake will be slower than in human health because of the lack of third-party payers, according to Brakke, and veterinarians will continue to use proven solutions. Nevertheless, some attractive features of monoclonal antibodies in veterinary medicine are infrequent dosing, high efficacy, being given by injection in a clinic, and a good safety profile.

In December 2016, the U.S. Department of Agriculture approved Cytopoint, a monoclonal antibody to treat atopic dermatitis in dogs. U.S. sales in 2020 were about $240 million. On Jan. 13, the Food and Drug Administration approved Solensia, a monoclonal antibody that targets nerve growth factor to treat pain associated with osteoarthritis in cats (see story). FDA approval of Librela, the corresponding drug for dogs, is expected in the second half of 2022, according to Brakke. All three drugs are from Zoetis.

Brakke believes that monoclonal antibodies have the potential to impact veterinary medicine broadly because they will serve unmet medical needs, will be priced higher than current treatment options, and must be administered in a veterinary clinic.

Brakke will present the industry overview again on March 7 at WVC.

The Human Animal Bond Research Institute and Zoetis commissioned the survey on the human-animal bond, which was conducted by CM Research in 2021. The respondents were more than 16,000 dog and cat owners and more than 1,200 small animal veterinarians in Brazil, China, France, Germany, Japan, Spain, the United Kingdom, and the United States.

The survey found the following about pet owners:

A new scale called the Human-Animal Bond Score was developed for the project. The mean global score was 57.9 out of 70. The survey found no strong cultural differences in terms of how the human-animal bond is experienced and expressed.

The survey found the following about veterinarians:

The Human Animal Bond Research Institute and the NAVC offer certification in the human-animal bond, with the AVMA as the founding educational partner. Details are at the NAVC website. Additional survey results are at the HABRI website.

The Veterinary Nurse/Technician Empowerment Initiative from the NAVC encompasses new programs for credentialed veterinary technicians and a national consumer awareness and education campaign.

In early 2022, the NAVC is launching the national consumer awareness and education campaign sponsored by VCA Animal Hospitals, with support from the National Association of Veterinary Technicians in America. The campaign will address the issues identified in a national survey conducted by Atomik Research on behalf of the NAVC, which found that many pet owners are neither aware of nor understand the role and educational requirements of certified veterinary technicians. After learning about credentialed veterinary technicians and their required level of education and expertise, 69% of pet owners reported that they feel more confident and comfortable with the level of care that these members of the veterinary practice provide to pets.

“A more informed and educated consumer—and a more informed veterinarian and practice manager—will not only benefit veterinary nurses and technicians, but will also benefit the practices where they work. The ultimate result being the delivery of better care for animals,” said Ed Carlson, then NAVTA president, in an announcement about the initiative. “Once this is accomplished, consumers will be as comfortable with a veterinary technician caring for their pet, as they are with an RN (registered nurse) caring for their loved one in a hospital.”

Banfield Pet Hospital has decreased the anesthesia-related mortality rate in dogs and cats combined by implementing new standards, according to the latest Veterinary Emerging Topics Report from Banfield and the North American Veterinary Community.

The annual VET Report focused this year on how to improve safety and quality in veterinary practice overall, with a case study on anesthesia at Banfield hospitals. 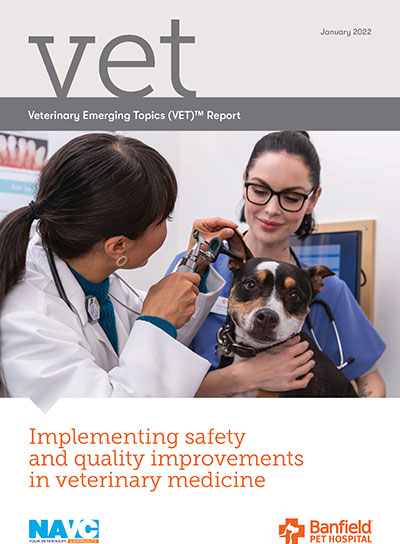 To frame quality of veterinary care, Banfield uses Domains of Quality, adapted from the Agency for Healthcare Research and Quality and first created by the Institute of Medicine. Under the framework, veterinary care should be equitable, safe, effective, timely, centered on pets and clients, and efficient.

In fall 2017, to improve anesthesia safety, Banfield implemented standards of practice to constitute the minimum acceptable level of care and best practices to meet or exceed the expected level of care. In fall 2018, Banfield added informational job aids to review and discuss the standards as well as two checklists, the Anesthesia Machine Checklist and the Pre-Induction Timeout Checklist.

The report goes on to offer tools for veterinary practices to improve quality. Two worksheets can help practices determine the root causes of adverse events. The report also outlines how to create champions for quality, foster communication to create and sustain a culture of quality and safety, and take steps after adverse events.

Banfield offers anesthesia resources and the series of VET Reports at Banfield Exchange.

A version of this article appears in the March 1, 2022, print issue of JAVMA.