From groundbreakers to disease hunters to Nazi fighters: A look at notable female veterinarians on International Women's Day 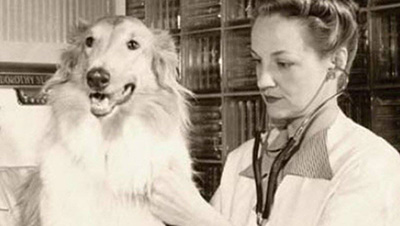 In honor of International Women's Day on Friday, March 8, the American Veterinary Medical Association (AVMA) is celebrating the impact and achievements of women within the veterinary profession.

As recently as 1975, women made up only 5 percent of the profession, with no women serving among AVMA's officers, executive board or councils, and only one woman serving in AVMA's 126-member House of Delegates.

"AVMA's commitment to expanding diversity within the veterinary profession and leadership is evident in all that we do," said Dr. John de Jong, AVMA president. "From offering focused programs and scholarships for rising leaders and veterinarians in underrepresented groups at our Veterinary Leadership Conference and the AVMA Convention to working with, and supporting groups, like the Women's Veterinary Leadership Development Initiative, we know that a 'better balance' will strengthen all of veterinary medicine.".

Following are just a few of the groundbreaking women who have made significant contributions to the veterinary profession and helped save the lives of animals and people:

The AVMA is thankful for these groundbreaking and world-changing veterinarians, and for all of the women who have helped pave the way for the veterinarians protecting human, animal and environmental health today.

Visit the AVMA's website for additional information on AVMA initiatives and policy on diversity and inclusion. For more information about International Women's Day, #balanceforbetter, visit InternationalWomensDay.com.