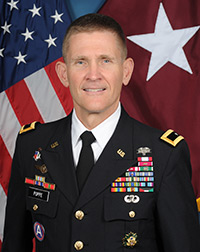 Established in 2001, the award recognizes a veterinarian who has brought honor and distinction to the veterinary profession through personal, professional or community service activities that are conducted outside the scope of organized veterinary medicine or research. The AVMA Board of Directors selects the recipient.

“Dr. Poppe’s much-decorated career has been one of exemplary service to both our profession and our nation,” said Dr. Douglas Kratt, president of the AVMA. “He has served with the highest honor, and since his retirement has continued to advance veterinary science as an educator and philanthropist. His work defines the very core of meritorious service.”

Dr. Poppe retired in 2015 from the United States Army, where he served as the 25th Chief of the Army Veterinary Corps.

During his 28 years of service, he cared for the pets of military families as well as government-owned animals ranging from military working dogs to ceremonial horses and marine mammals. He also ensured food safety within federal agencies on all seven continents, and worked on projects such as rabies in deployed environments and global zoonotic disease control.

“He has truly made significant and enduring contributions through personal, professional and community service activities that have brought great honor and distinction to our veterinary profession,” said Dr. Margery Hanfelt, DVM, who nominated Dr. Poppe.

After his retirement from active duty, Dr. Poppe published the Textbook of Military Veterinary Services in 2019. This first-of-its-kind textbook, with 123 contributing authors, culminated a 10-year effort to capture the unique practice of military veterinary service.

Dr. Poppe received his Doctorate of Veterinary Medicine from Washington State University, a Master’s in Public Health from Tulane University, and a Master’s of Strategic Studies from the U.S. Naval War College.

Originally from Washington state, Dr. Poppe and his family retired in San Antonio, where he serves as Vice Chairman of the Military Affairs Committee of the San Antonio Stockshow & Rodeo, which has raised nearly $200 million in scholarship funds for the youth of Texas.

He is president of the Uniformed Veterinary Medicine Association, which raises funds for replacement horses for one of only two active-duty caisson units in the United States that honor and transport fallen service members to their final rest.