Public health officials are investigating a multistate Salmonella outbreak linked to pet bearded dragons that has sickened dozens of people over nearly a year.

A total of 44 people had been infected with the Salmonella Uganda strain in 25 states, according to a Jan. 11 statement from the Centers for Disease Control and Prevention.

Illnesses occurred from Dec. 24, 2020, to Dec. 2, 2021, and have been reported from coast to coast. No deaths have been attributed to the Salmonella outbreak, but 15 cases (41%) required hospitalization, the CDC said. 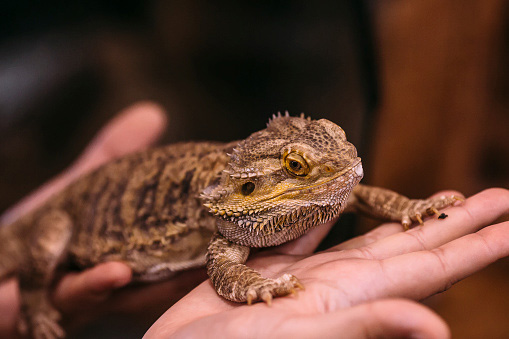 The agency estimates the true number of human cases is likely much higher than the number reported and may not be limited to states with known cases.

“This is because many people recover without medical care and are not tested for Salmonella. In addition, recent illnesses may not yet be reported as it usually takes two to four weeks to determine if a sick person is part of an outbreak,” the CDC explained.

Public health investigators are using the CDC’s PulseNet system, a national database of DNA fingerprints of bacteria that cause gastrointestinal illnesses.

Late last year, Oregon state public health officials analyzed Salmonella samples collected from a bearded dragon owned by an individual sickened during the outbreak. Subsequent genome sequencing showed the samples from the lizard were closely related to samples from the 44 human cases.

Salmonella is a common part of a healthy digestive tract in reptiles, which shed the bacteria in their feces. Considering the outbreak spans nearly a year and has occurred in several states, Brian Todd, PhD, a professor of conservation biology at the University of California-Davis, doubts there was a single source from which all the bearded dragons came.

Dr. Todd, who is not part of the ongoing investigation, speculates that a food item marketed for bearded dragons or other popular pet lizards may be involved.

“Specially, if the pet lizard food was from a common distributor, it may explain the rise in Salmonella in the lizards across different places and time,” Dr. Todd explained. “The pet food may not have been tainted with Salmonella itself, but may have just changed the conditions of the lizards’ digestive systems.”

Another culprit may be that people obtained or spent more time with pet lizards during the COVID-19 pandemic.

All reptiles have the potential to transmit Salmonella to humans, as do birds, especially poultry.

The CDC advises owners of bearded lizards to always wash their hands thoroughly with soap and water right after touching or feeding their pets and after touching or cleaning the area where the pets live and roam.

Food and water containers along with toys and other supplies for bearded dragons should be cleaned outside the house, if possible. The CDC strongly recommends against kissing or snuggling bearded dragons or allowing them near where people eat and drink.