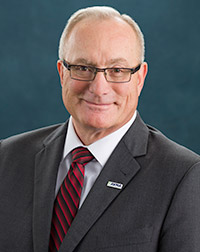 He served as AVMA president from 2019-2020, AVMA president-elect from 2018-2019, and represented District VII on the AVMA Board of Directors from 2012-2018. During his service on the AVMA Board, Dr. Howe served as chair of the State Advocacy Committee and Diversity and Inclusion Committee, and was Board liaison to the Council on Veterinary Service; Governance Performance Review Committee; Aquatic Veterinary Medicine Committee; Committee on Disaster and Emergency Issues; the Insurance Liaison Committee; Council on Biologic and Therapeutic Agents; Clinical Practitioners Advisory Committee; AVMA/NAVTA Joint Committee; Nominations Committee; Council on Public Health and Regulatory Veterinary Medicine; Food Safety Advisory Committee; Board Subcommittee on AVMA Compensation; Budget, Finance and Review Committee; and Advocacy and Public Policy Review Committee. In addition, he was Board liaison to the American Association of Equine Practitioners and the American Association of Swine Veterinarians.

He also served as vice chair of the AVMA Council on Veterinary Services and Governance Performance Review Committee, and has filled in as a delegate or alternate delegate whenever someone was unable to attend the meeting from Minnesota.

Dr. Howe is a member of his local chamber of commerce. He was extensively involved with the teen ministry at his local church, where he also serves as a deacon. He has been affiliated with the Minnesota Department of Natural Resources as a bow hunter safety education instructor and an archery instructor for the Cub Scouts. He has also served as Board chair for the Minnesota Shooting Sports Education Center, a training center for the U.S. Biathlon and Junior Olympic shooters.

Dr. Howe, his wife, Diane, and their children raised and showed Appaloosa horses. His hobbies include scuba diving, fishing, hunting, shooting sports competitions, and snowmobiling. Dr. Howe and Diane have been married for more than 47 years, and they have three children (one of whom died during surgery in 2015) and five grandchildren.