State and federal authorities repeated warnings that people shouldn’t take ivermectin approved for livestock use in attempts to prevent or treat COVID-19.

The Centers for Disease Control and Prevention reported that prescriptions for human-use formulations also had risen dramatically even though the drug is not approved for use in treating COVID-19 in any form. The World Health Organization also recommends against administering ivermectin to patients with COVID-19 except during a clinical trial.

Food and Drug Administration officials have been warning since at least March that people shouldn’t ingest ivermectin formulated for nonhuman animals.

On Aug. 30, FDA Center for Veterinary Medicine officials said in a letter to veterinarians and animal product retailers that people have become seriously ill from consuming highly concentrated ivermectin formulations, such as pour-on products, injectable products, pastes, and drenches meant for horses, cattle, and sheep. Agency officials also were receiving reports of local shortages of some veterinary-use approved ivermectin products, and they called for veterinarians and animal caretakers to report difficulties obtaining those drugs to AnimalDrugShortages 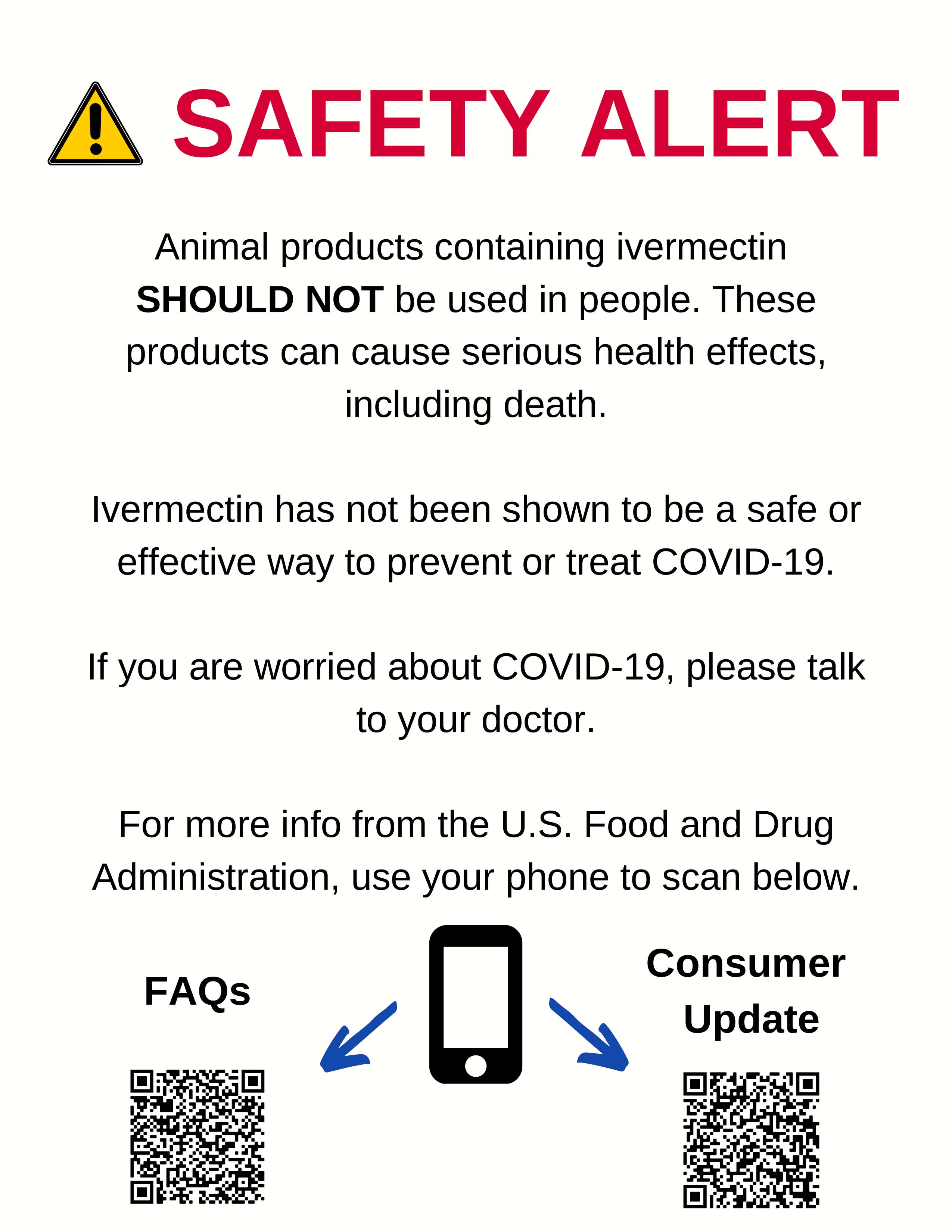 Poison control officials said in August they were receiving substantial numbers of calls from people experiencing side effects—mostly mild illnesses—from consuming veterinary-use ivermectin. Some poison control centers across the U.S. were receiving five times as many calls about human exposures to ivermectin in July 2021 as compared with a pre-pandemic baseline. The reports of ivermectin misuse coincided with rising numbers of SARS-CoV-2 infections.

Authorities with the Mississippi State Department of Public Health warned Aug. 20 that the Mississippi Poison Control Center had received an increase in the number of calls from people who had ingested ivermectin to treat or prevent COVID-19. Two days earlier, department officials said in a press conference that hospitals in the state needed help during what had become the worst point in the pandemic, and they expected the situation would worsen.

Officials from the Mississippi Poison Control Center, located at the University of Mississippi Medical Center, indicated about 2% of calls received by the center from Aug. 1-25 were related to ivermectin. Of those calls, 70% were connected with formulations intended for livestock or other nonhuman animals.

Mark Winter, PhD, director of the Southeast Texas Poison Center in Galveston, said Aug. 27 that Texas’ network of poison control centers had received about 301 ivermectin calls in 2021, 82 of them since the start of the month. The centers received about 200 calls annually in 2019 and 2020, and a typical case in past years involved an accidental exposure while treating an animal.

Misuse can have dangerous consequences

Dr. Winter described one recent call to his poison control center from a woman whose boyfriend, a man in his 30s, had eaten the full contents of an oral administration syringe of horse-deworming ivermectin paste. The dose would have been appropriate for a 1,250-pound animal, Dr. Winter said.

“I could hear him yelling from the background, ‘It’s apple flavored; it didn’t taste that bad,’” he said.

Dr. Winter tried to convince the woman that the man needed medical attention because that dose could cause neurologic and cardiac symptoms, in addition to the man’s nausea, vomiting, and diarrhea. Dr. Winter also learned the man had COVID-19 and thought a large dose would cure the disease.

In the warning first issued in March, FDA officials indicated it was understandable that some people sought unconventional treatments after living so long with the SARS-CoV-2 virus, which causes COVID-19. But such unproven, unapproved, and unauthorized treatments can cause serious harm.

Even the ivermectin products approved for use in human medicine can interact with blood thinners or other medications, FDA officials warn. Animal drugs, on the other hand, are often highly concentrated—especially those used in large animals such as horses and cows—and high doses of those drugs could be highly toxic in humans.

Ivermectin overdoses can cause nausea, vomiting, diarrhea, hypotension, itchiness, hives, dizziness, loss of balance, seizures, and coma. Some overdoses can be fatal.

In addition, animal drugs often have inactive ingredients not evaluated for use in human medicine, and FDA officials don’t know how those ingredients affect drug absorption in a human body, FDA information states.

In a Q&A, agency officials acknowledged that a scientific article published in June 2020 by Antiviral Research describes positive results from use of ivermectin in a laboratory setting. But they also said such studies are common in the early stages of drug development, and additional testing is needed to determine whether ivermectin might be appropriate to prevent or treat COVID-19.

Dr. Winter said some callers say they are taking ivermectin instead of getting vaccinated because ivermectin products have been made longer, so they assume medical professionals have more data on effects of those products than they have on the SARS-CoV-2 vaccines. But he said medical professionals lack information on the long-term effects of ivermectin on the human body, and some of these callers are taking it daily at three to four times the approved human-use doses.

Some take it in attempts to cure COVID-19 and others to prevent it, he said. Though people are often buying the veterinary-use products from farm supply stores, most of the calls are coming from Texas’ most populous counties.

On Aug. 26, the Centers for Disease Control and Prevention issued an advisory after seeing that retail pharmacies in the U.S. dispensed about 88,000 prescriptions for human-use ivermectin in the week ending Aug. 13, a 24-fold increase from an average of 3,600 prescriptions a week prior to the pandemic. The same day, the Houston Chronicle reported that Dr. Joseph Varon, chief medical officer at United Memorial Medical Center in Houston, told the newspaper that he had been administering ivermectin to his COVID-19 patients since the start of the pandemic.

And, one day earlier, the American Civil Liberties Union of Arkansas published a statement indicating a medical provider for a county jail in northwestern Arkansas had prescribed ivermectin to treat inmates with COVID-19, despite FDA warnings. Holly Dickson, executive director of the ACLU of Arkansas, said in the organization’s statement that nobody, including incarcerated individuals, should be subject to medical experimentation.

The CDC data on ivermectin prescriptions come from retail pharmacies that together represent 92% of all retail prescription activity in human medicine.

In human medicine, ivermectin is FDA approved in oral formulations to treat onchocerciasis and intestinal strongyloidiasis and in topical formulations for head lice and rosacea. CDC officials advised that medical professionals educate patients about the risks of using ivermectin without a prescription or ingesting formulations meant for external or veterinary use.

COVID-19 a year later: How the veterinary profession adapted