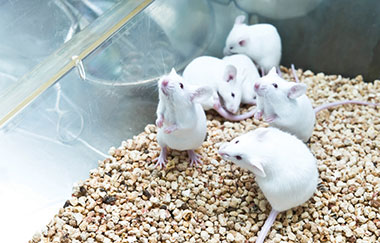 The wild-type SARS-CoV-2 variant does not infect these mice.

In a preprint article in bioRxiv, which had not undergone peer review, a French team reported March 18 that two SARS-CoV-2 variants of concern in humans, known as B.1.351, which was first discovered in South Africa, and P.1, first discovered in Brazil, replicated efficiently in two strains of mice following inoculation and produced high viral titers in their lungs. The preprint also indicates inoculation with the B.1.1.7 variant of concern, first discovered in the U.K., produced lower viral loads in the lungs of one mouse strain and did not replicate in the other. The study did not investigate whether inoculated mice could transmit the SARS-CoV-2 variants to naive mice, nor did the study measure antibody titers.

The authors are affiliated with the Institut Pasteur campuses in Paris and French Guiana, the National Veterinary School in Maisons-Alfort, and Paris-Est Creteil University. BioRxiv information notes that preprint articles on the site have not been finalized and may contain errors.

Research mouse supplier The Jackson Laboratory responded to the article with a recommendation to add routine sentinel testing to protect research colonies and vivarium staff members. JAX has developed a polymerase chain reaction–based testing program for SARS-CoV-2 in mice.