Being Black in a white profession

Dr. Willie Reed, dean of Purdue University College of Veterinary Medicine, has been a Black member of one of the country’s whitest professions, the veterinary profession, long enough to have collected many—far too many—stories of prejudice.

One incident Dr. Reed related to JAVMA News occurred in the mid-’90s when he was director of the Veterinary Diagnostic Laboratory at Michigan State University. A client disagreed with the laboratory’s pathology report on her horse, and she wanted to speak with Dr. Reed about it.

“When she came into my office, we sat down, and I started describing the pathology report,” he said. Then she suddenly says, “‘Dr. Reed, you know what? You’re Black.’ That’s what she told me.

“Then she says, ‘If you’re Black, and Michigan State gave you this job, you must be really good. I believe what you’re saying, and I accept your diagnosis.’ Then she got up and walked out.”

Dr. Reed laughed recalling the incident. “She couldn’t believe that Michigan State would ever hire a Black person, but if they did, he must be Superman.”

He struggled with what he said next, though. “Every time, you never … it’s just something that a white person doesn’t … if you’re white, you don’t even have to think about it, ever, if you’re going to be rejected because of the color of your skin.”

Few interactions between Black veterinarians and white clients are as flagrantly racist as the incident described by Dr. Reed, but racial bias and prejudice are a fact of life for Black veterinarians in the workplace. Many white veterinarians are unaware of the challenges their Black colleagues face because they have not personally been affected by racism or don’t recognize how racism still occurs today. “We all have experienced white clients who didn’t want us treating their pets,” said Dr. Michael Blackwell, director of the Program for Pet Health Equity at the University of Tennessee College of Social Work.

Dr. Blackwell spent three years as a mixed animal practitioner in southeastern Oklahoma after receiving his veterinary degree in 1975 from Tuskegee University.

“Clients were generally very subtle about not wanting a Black veterinarian treating their pet, but I know of many stories where it wasn’t so subtly stated,” Dr. Blackwell continued. “But it’s a thing. It’s less of a thing today, but it’s still a thing.”

Dr. James Anderson II is a general practice relief veterinarian in Weston, Florida, about 40 miles northwest of Miami. Dr. Anderson says he hasn’t experienced overt racism when his job takes him into the city, but it’s a different matter when he works in what he described as smaller, less diverse communities.

If you’re white, you don’t even have to think about it, ever, if you’re going to be rejected because of the color of your skin.

“There would always be a pause after introducing myself,” he said, a “reaction quirk” when meeting a Black male veterinarian for the first time.

How do Black veterinarians cope? “You can’t let it bother you because, otherwise, it makes you miserable,” Dr. Reed said. “Fortunately, not everybody’s like that. It’s just that you don’t know when you’re going to encounter it.”

Over the past year, professional organizations including the AVMA and American Association of Veterinary Medical Colleges have committed to making veterinary medicine a profession in which individuals from underrepresented minorities feel safe and valued—important goals that require hearing their pain and frustration.

When Black veterinarians are trying to decide whether a job opportunity at a practice is right for them, in addition to the usual matters of salary, hours, and benefits, they have to make a series of determinations solely on the basis of their race. Will clients at the new practice accept a Black veterinarian? Will the practice owner and manager support me? Are there other minority staff members, or am I the only one?

“Black individuals do not simply want a job. They also want a community they can easily join and to find the support they require” as an underrepresented minority, explained Dr. Kemba Marshall, director of veterinary services for Land O’Lakes Purina Animal Nutrition Center and founder of Marshall Recruiting Consortium.

Dr. Marshall recounted a time when she worked for a private practice in Dallas and her employer’s support empowered her to deal with a racist client. The client didn’t believe Dr. Marshall had graduated from the University of Florida College of Veterinary Medicine, claiming she had never heard of a veterinary college in Florida. Dr. Marshall showed her UF veterinary diploma—framed and hanging on the clinic wall—to the client, then asked the receptionist to help the client find another board-certified avian practitioner in the city.

“I was able to advocate for myself in that moment and tell the client, ‘Let me show you the door,’ because I knew the practice manager and owner would say the same thing,” Dr. Marshall said.

“As a veterinarian, I assign a lot of my fulfillment to improving the health and well-being of animals,” she said. “And not helping a client’s pet because the client has come to me in a way that is disrespectful limits what I truly feel I am called to do. That’s the tension: How do I do what I love without sacrificing who I am as a Black woman?”

Black veterinarians must be prepared to continuously prove themselves or risk the stigma of being labeled or stereotyped, added Dr. Ruby Perry, dean of Tuskegee University College of Veterinary Medicine. There is also the issue of safety. “In some parts of America, it is not safe for a Black veterinarian to work,” said Dr. Perry, also the co-chair of the Commission for a Diverse, Equitable, and Inclusive Veterinary Profession, created by the AVMA and AAVMC. (Dr. Marshall is a member of the commission, as well.)

Some white clients do not feel comfortable having a person of color on their property, and it is not safe for people of color to be in that environment, Dr. Perry continued. Although it may be the passion of some Black veterinarians to pursue mixed animal mobile practice, they must be cognizant of their surroundings all the time in a way their white colleagues do not have to be. 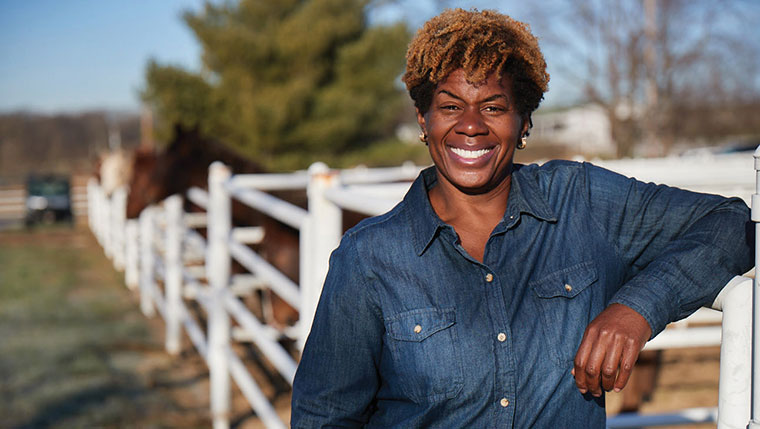 Black individuals do not simply want a job. They also want a community they can easily join and to find the support they require.

“We have a large number of graduates who pursued pathology, public health, and graduate studies as a career option,” Dr. Perry said. “In the early ’70s, additional pressure was placed on the government to enhance diversity in the workplace, and intense efforts began which increased the number of Black veterinarians in government. The government embraced diversity, equity, and inclusion and pursued many Tuskegee graduates, making them leaders and recognized for their contributions.”

In the late 1970s, when Dr. Blackwell left private practice in Oklahoma to work in the public sector, it was clear to him that the federal government was serious about promoting racial and gender equity within its ranks. “Those issues were not even being talked about in private veterinary medicine, at least not in an organized way in which it appeared that the profession was embracing diversity, equity, and inclusion,” Dr. Blackwell said.

Over the decades, as America began opening up to its Black citizens, Black veterinarians saw clinical practice become a viable career option. Tuskegee graduate data from 2016-20 show 65% of its veterinary graduates went into private practice, 22% pursued internships, 4.3% took jobs in the government and military, and 8.7% pursued other areas of the profession. (It should be noted that a majority but not all graduates are racial or ethnic minorities.)

Although there are no available data on the number of Black-owned veterinary practices in the United States, there’s a sense within the Black community that Black veterinarians face challenges to practice ownership that their white colleagues don’t.

“While there is a strong bent in communities of color toward entrepreneurship, there’s also realities such as lending discrimination and housing discrimination that are frankly directly related to the realities of marginalization and discrimination,” said Lisa Greenhill, EdD, senior director for institutional research and diversity at the American Association of Veterinary Medical Colleges.

“It doesn’t mean that lots of Black veterinarians do not go this route, but it does mean that more probably don’t.”

Corporate-owned veterinary practices are working to draw underrepresented minorities through commitments to diversity, inclusion, and a supportive culture. Tiffany King, director of equity, inclusion, and diversity for Banfield Pet Hospital, said Banfield feels a responsibility to leverage its size and scale to diversify the talent pipeline and create a more equitable and inclusive profession.

“More than 25% of Banfield’s credentialed veterinary professionals—DVMs and veterinary technicians—come from diverse backgrounds, compared to the industry average, with minorities making up approximately 10% of the veterinary population,” King said.

Commitments from Banfield include partnering with Royal Canin and Tuskegee’s veterinary college to launch the Banfield and Royal Canin Student Support Fund, with an initial $125,000 gift to help veterinary students who have financial need. The company is also investing more than a million dollars over the next year in equity, inclusion, and diversity efforts to increase minority representation, offer training, and support industry efforts to improve the diversity pipeline.

Idexx Laboratories established a Diversity and Inclusion Council in 2017; created a global leadership role devoted to diversity, equity, and inclusion in 2019; and, in March 2020, formed its Talent Acquisition Diversity and Inclusion Committee, intended to “identify and address challenges related to sourcing, recruiting, and hiring diverse talent; determine best practices; and define measures of success,” according to the company’s 2020 corporate responsibility report.

Zoetis has plans to increase investments in diversity and inclusion education and training, expand leadership development and networking offerings for colleagues, and require diverse slates of candidates and interviewer panels for open positions.

“We are committed to making measurable gains in diversity,” wrote Kristen Peck, Zoetis CEO, in an August 2020 social media post. “Importantly, we are holding ourselves accountable by publishing our current diversity statistics and aspirations for change over the next five years. This includes aspiring to increase our representation of people of color in our U.S. workforce to 25% by 2025. Today, people of color comprise 21% of our U.S. workforce.”

By the end of 2025, Zoetis aspires to increase representation of Black people in its U.S. workforce from 4% to 5%.

For practice owners serious about creating a workplace that better resembles the nation’s demographic diversity, Dr. Perry advised them to provide diversity training and team-building workshops because veterinary staff members from different cultures and races come with different perspectives.

“With a safe and conducive working environment, employees recruit others,” she said. “They are the practice owner’s best advocates.”

The AVMA is offering a new program designed to strengthen veterinary practices by supporting inclusion of diverse people and encouraging open workplace dialogue about complex topics such as race and sexual harassment.

“The Brave Space program was created to provide learners the opportunity to expand their knowledge, engage in self-awareness building processes and ultimately come out as a more intentionally committed ally for promoting safe, inclusive environments for every member of the profession,” AVMA President Douglas Kratt said.

The Brave Space Certificate Program is a self-paced interactive curriculum taught by experts.

“A workplace that offers a safe, welcoming environment is one in which everyone—from team members, to patients and clients, to the community which a practice serves—is seen and valued,” said Jen Brandt, PhD, AVMA director of well-being and diversity initiatives.

The program consists of educational categories covering diversity, equity, and inclusion and several modules addressing such topics as LGBTQ inclusion and support, combating unconscious bias and marginalization, and understanding and addressing racism.

In collaboration with founding educational partner Pride Veterinary Medical Community, the Brave Space Certificate Program is made possible by an educational grant from Royal Canin.