When should we neuter dogs?

Spaying and neutering pet dogs and cats not meant for breeding has long been the standard in veterinary medicine. Yet, recent research linking gonadectomy to higher incidences of certain diseases in neutered dogs is raising questions about a procedure once thought relatively safe.

Earlier this year, the AVMA House of Delegates devoted a portion of its Veterinary Information Forum to this issue after two studies published in the journal Frontiers in Veterinary Science in July reported associations between neutering and higher rates of joint disorders and cancers in some mixed-breed dogs and dogs of particular breeds.

During the HOD’s virtual regular winter meeting held Jan. 8-9, several AVMA delegates shared challenges they’ve faced related to neutering canine patients. For instance, the recovery time is longer and the procedure is more expensive for older dogs than for younger dogs undergoing ovariohysterectomy. Retention of deciduous teeth is not uncommon in toy dog breeds, and retained teeth have frequently been removed at the same time the dog was neutered. That may not be possible if gonadectomy is delayed until after the first year.

“We have breeders in our area giving clients conflicting advice on the timing of spay-neuter,” noted Dr. Gary Stuer, the alternate delegate for the American Holistic VMA and a clinical practitioner in Bethel, Maine.

Veterinarians and the animal shelter community have long promoted neutering pet dogs and cats not meant for breeding, most notably to prevent litters of unwanted puppies and kittens. U.S. dog owners have gotten the message, as 78% of dog-owning households had spayed or neutered their canine companions, according to the American Pet Products Association’s 2019-20 National Pet Owners Survey.

Although various alternatives to gonad removal exist, such as vasectomies and hysterectomies, gonadectomy is by far the most common procedure practiced by veterinarians.

Still, the relationship between sex hormones and canine health is not well understood. There is evidence that the hormones’ absence offers neutered dogs protection against certain diseases, including mammary adenocarcinoma and pyometra. But there is reason to suspect that absence may contribute to negative health outcomes as well.

Each individual animal must be considered, and veterinarians should inform the client about all the issues and let them make an informed decision about their pet.

The findings are the product of several years spent analyzing thousands of records of canine patients treated at UC-Davis’ William R. Pritchard Veterinary Medical Teaching Hospital. “Our studies show quite a bit of variability among breeds, sex, and age at the time of neutering; that’s what really comes through,” said Dr. Hart, a professor emeritus at the UC-Davis School of Veterinary Medicine.

Both reports provide guidelines for minimizing disease risks associated with spaying and neutering. For example, the recommendation for female Golden Retrievers, given the increased occurrence of cancers regardless of age at the time of spaying, is to leave females intact or spay them at 1 year of age and remain vigilant for cancers. For Boxers, given the breed’s high cancer rates, the recommendation is to delay neutering until beyond 2 years of age.

“The idea is that this should be a consultation with the client,” Dr. Hart explained. “You don’t just say, ‘OK, at six months or a year, bring your dog in for a spay or neuter.’ Each individual animal must be considered, and veterinarians should inform the client about all the issues and let them make an informed decision about their pet.”

As with all studies linking gonadectomy with higher disease rates, the UC-Davis studies have been criticized. During the HOD information forum, Dr. Lindy O’Neal, the Arkansas delegate to the HOD and a member of the House Advisory Committee, raised several issues concerning the study that looked at 35 dog breeds.

“While new data is valuable, limitations of the research require critical evaluation,” Dr. O’Neal said. “This includes the retrospective nature of the study, small sample sizes, contradictory findings between breeds, selection bias of records from a secondary or tertiary referral hospital, challenges with statistical analysis, and the relatively young average age of patients at their last recorded visit.” 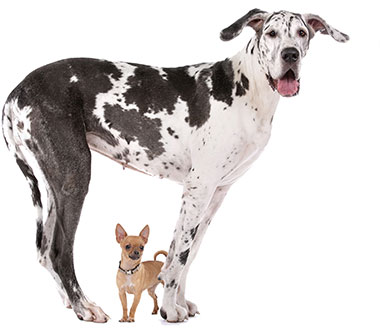 She referenced a Veterinary Information Network paper written by veterinary oncologists who found fault with several of the study’s cancer-related conclusions.

“While there is evidence that desexing variably increases the risk of certain cancers in dogs,” the paper states, “this needs to be weighed against the impact of desexing on overall survival.

The American College of Theriogenologists and the Society for Theriogenology maintain that companion animals not intended for breeding should be spayed or neutered unless the procedure is contraindicated. Moreover, any potential consequences to the individual animal must be weighed against the necessity for population management.

AVMA promotes the professional judgement of the veterinarian in developing an informed, case-by-case assessment of each individual patient, taking into account all the potential risks and benefits of spay/neuter.

The simple fact is that there is no single recommendation concerning gonadectomy that is appropriate for every dog. There are just too many variables to account for, including breed, sex, age, and body type. Whether to spay or neuter must therefore be decided on a case-by-case basis.

“AVMA promotes the professional judgement of the veterinarian in developing an informed, case-by-case assessment of each individual patient, taking into account all the potential risks and benefits of spay/neuter,” said Dr. Kendall Houlihan, an assistant director of animal welfare for the AVMA.

During the HOD reference committee discussions, Dr. Rens van Dobbenburgh, president of the Federation of Veterinarians of Europe, said similar talks were taking place across the Atlantic, where opinions on the timing of spay or neuter are mixed.

The good news is there is no shortage of resources to help veterinarians in that decision-making process.

In addition to AVMA resources, the World Small Animal Veterinary Association recently announced the formation of the Spay-Neuter Standardization Committee. Its purpose is to provide WSAVA members the latest information to aid them in making recommendations as to the most appropriate approach to neutering in their patients.

'We do one thing, and one thing only'