At least 8,000 minks have died of infection with SARS-CoV-2 on farms in Utah.

Infection seems to be deadlier among older minks.

State agriculture authorities in Wisconsin and Michigan also announced Oct. 8 and 9, respectively, that the virus had killed minks on one farm in each state. The Wisconsin farm’s animals and products were quarantined, and the farm in Michigan is self-contained, according to officials in each state. 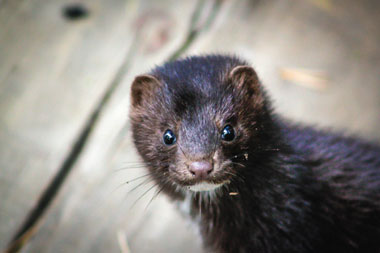 Dr. Dean Taylor, Utah’s state veterinarian, said in October that nine of the state’s 36 mink farms were quarantined because of confirmed infections. All of the deaths so far were from infections, and none of the farms implemented euthanasia or culling in response to the outbreaks, he said.

Death rates varied widely by farm, depending on the ages of the animals, Dr. Taylor said. The infections have been killing more than 40% of breeding flocks, yet the death rates remain low for younger minks, he said.

On Aug. 17, officials with the U.S. Department of Agriculture Animal and Plant Health Inspection Service announced minks on two Utah farms had confirmed infections with the SARS-CoV-2 virus, the first confirmed cases among minks in the U.S. Testing began after unusually large numbers of minks died on the farms, the announcement states.

The announcement also said the farms had confirmed infections among people who worked at those locations and had contact with the minks. It also notes that APHIS officials developed guidance for farming minks following infections among minks in Europe.

As of early October, those included confirmed outbreaks on farms in Denmark, the Netherlands, and Spain.

On Oct. 2, U.S. News and World Report published an article indicating animal health authorities in Denmark planned to cull about 1 million minks because of SARS-CoV-2 infections confirmed at 41 farms and suspected at 20. The government ordered depopulation at all farms within 8 kilometers of confirmed infections.

In Utah, the affected farms have been burying the whole carcasses of affected minks, despite reports that the pelts would be harvested and used, Dr. Taylor said. The quarantined farms were allowing entry only for people critical for operations, and no minks, mink products, or waste were leaving, he said.

Investigations so far indicated workers at the farms developed COVID-19, and, soon afterward, the minks became ill. But he noted that investigations continued on some farms.

A June 12 article in Science indicates that, in the Netherlands, at least two workers on mink farms likely contracted the virus from the animals.

The APHIS guidance indicates any mink farmer or veterinarian who suspects infections in minks or other mustelids should contact state animal health officials, who work with state and federal authorities to decide whether testing is warranted.

“We are still learning about SARS-CoV-2 in animals, but there is currently no evidence that animals, including mink or other mustelids, play a significant role in spreading the virus to humans,” the guidance states. “Based on the limited information available to date, the risk of animals spreading SARS-CoV-2 to people is considered to be low.”

Get more information about what’s known about COVID-19 in both people and animals.

Minks in Utah infected with SARS-CoV-2