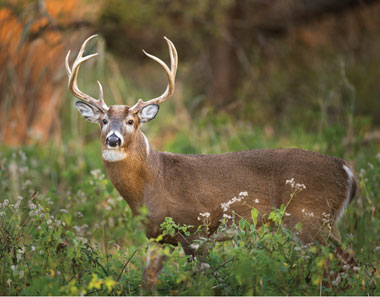 The findings give hope that breeding programs could reduce disease on deer farms.

So far, no deer have demonstrated immunity to CWD, which is an always-fatal prion disease. The ongoing studies examine naturally occurring genetic features that could make certain white-tailed deer less likely to become infected when exposed to the prions.

Dr. Christopher Seabury, who is the lead geneticist on the studies and an associate professor in the Texas A&M University College of Veterinary Medicine & Biomedical Sciences Department of Veterinary Pathobiology, said CWD-resistant deer may exist and some may be enrolled in his studies. In high-prevalence herds, some deer lacked detectable CWD prions, suggesting that possibility.

CWD has been detected in free-ranging cervids in 26 states and three Canadian provinces, and deer farming has been implicated in some spread of the disease.

Researchers from Texas A&M, with collaborators from the Texas Parks and Wildlife Department and U.S. Department of Agriculture Animal and Plant Health Inspection Service, reported earlier this year the discovery of genetic characteristics associated with susceptibility to infection with CWD-causing prions and disease progression among white-tailed deer. Dr. Seabury analyzed DNA samples from 807 farmed deer—284 of them positive for CWD—and identified highly susceptible animals with 80% accuracy.

Dr. Seabury said the study results show genetics can explain most of the differences in susceptibility.

APHIS is sponsoring further work at the university to validate those findings and rank the genetic risk of deer developing CWD, from high to minimal susceptibility. Once that study ends, APHIS officials hope to genotype CWD-positive cervids on farms, determine susceptibility in herds, and start a breeding project with monitoring for the prion disease.

Dr. Seabury said his team also plans to study susceptibility in wild deer populations. State wildlife agencies could use that information to relocate white-tailed deer with reduced susceptibility into areas where, for example, anthrax killed substantial numbers of deer.

The article published on the first phase of research, “Accurate Genomic Predictions for Chronic Wasting Disease in U.S. White-Tailed Deer,” is in the April 2020 issue of G3: Genes, Genomes, Genetics.

In July, APHIS officials also announced plans to fund $3.5 million in research and management to combat the spread of CWD in farmed and wild deer and elk. The money, $50,000-$250,000 per entity, will help state agencies develop CWD management, response, research, and education activities.

The federal agency plans to give priority to local governments that have confirmed infections and are working to understand or control their spread. Funding decisions are scheduled to be announced Sept. 30.