More than a century ago, the automobile ushered in a new age that fundamentally remade the practice of veterinary medicine. Will artificial intelligence do the same?

Virtually every area of life is somehow touched by AI, enhancing our understanding of complex issues and making better outcomes more likely. In the human health care industry, AI is being used in image interpretation, disease diagnosis, patient monitoring, drug development, and even robotic surgery. Google and IBM have invested heavily in the AI health care sector, which is projected to hit $150 billion over the next decade.

Veterinary medicine and pet owners are also using AI technologies, most notably in the areas of radiography, triage, and diagnosis. 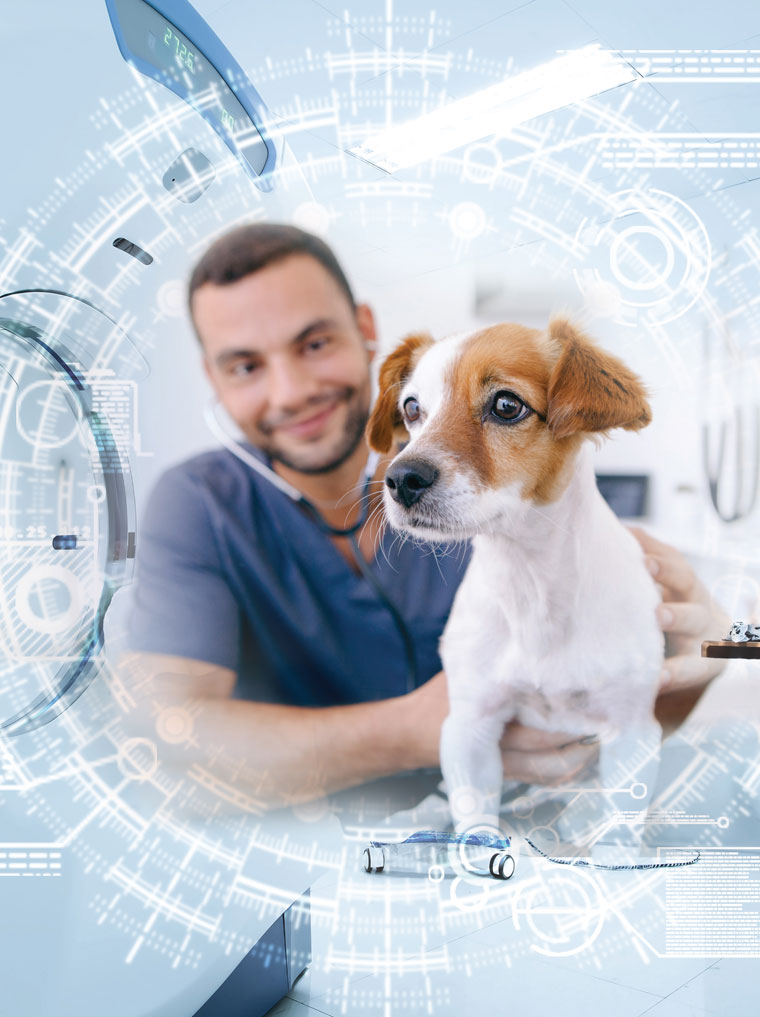 AI technology rapidly analyzes massive amounts of data according to a set of instructions known as algorithms to accomplish a specific task. These tasks run the gamut, from making an online book or movie recommendation to identifying a person based on their facial features.

And yet, the technology is nowhere near replicating human cognition or creativity. AI can only do what it’s instructed to do, meaning that the algorithms used to sniff out tax fraud can’t also forecast tomorrow’s weather.

Thomas Strohmer, PhD, is a mathematics professor and director of the Center for Data Science and Artificial Intelligence Research at the University of California-Davis. The center promotes interdisciplinary collaborations that use data science and AI to find solutions to some of the world’s most pressing problems, such as climate change and affordable health care for everyone. Dr. Strohmer says there are two types of AI.

“One is a general, very high view of AI that can think and read like humans. This is a grand vision of AI that doesn’t exist yet, right? It’s science fiction and doesn’t exist, not even close,” he explained. “Then you have the more narrow AI that you use for driving cars, language translation, and other really impressive applications. This is what we usually mean when we talk about AI: task-specific AI.

“But I should make it very clear, there is no ‘I’ in AI, not yet. The people who write these algorithms are very intelligent, but the algorithms themselves are not intelligent in a way that they can reason.”

In a 2019 report, the National Academy of Medicine wrote, “AI has the potential to revolutionize health care” and “offers unprecedented opportunities to improve patient and clinical team outcomes, reduce costs, and impact population health.”

The academy also sought to temper expectations about what AI could achieve, however. “One of the greatest near-term risks in the current development of AI tools in medicine is not that it will cause serious unintended harm, but that it simply cannot meet the incredible expectations stoked by excessive hype. Indeed, so-called AI technologies such as deep learning and machine learning are riding atop the utmost peak of inflated expectations for emerging technologies.”

Dr. Krystle Reagan makes it clear that she isn’t a computer scientist. Rather, she’s a veterinary internist at the UC-Davis Veterinary Medical Teaching Hospital and an advocate of AI. She helped develop an algorithm to detect Addison disease with an accuracy rate greater than 99%.

Blood work results from more than 1,000 dogs previously treated at the teaching hospital were used to train an AI program to detect complex patterns suggestive of the disease. The computer program was then able to use these patterns to determine whether a new patient has Addison disease. Dr. Reagan and her team published their findings in the July 2020 issue of the journal Domestic Animal Endocrinology.

Now Dr. Reagan is coding data from canine patients seen at the UC-Davis teaching hospital over the past decade in which leptospirosis was diagnosed or suspected but later ruled out. The project is a collaboration among Drs. Reagan and Strohmer and the center for data science and AI.

“Then we’re using machine learning algorithms to try to identify subtle patterns in the blood work of these dogs that might help us categorize them as having leptospirosis or not earlier than we can with traditional diagnostics,” Dr. Reagan explained.

Timing is important when diagnosing leptospirosis, Dr Reagan said, because the disease can cause serious kidney problems that can become so severe as to require dialysis. “Unfortunately, the gold standard testing for leptospirosis requires two antibody tests about 10 days apart,” she continued.

“The gold standard tells us that I can’t make a diagnosis until at least 10 days after illness. And we really need some sort of tool to help us give owners some guidance in terms of prognosis when we’re looking at this ill dog and deciding whether or not to move forward with dialysis. 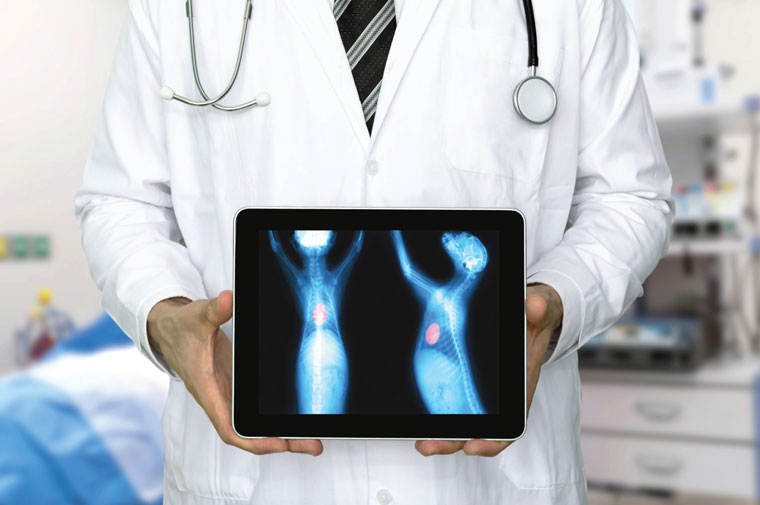 Radiography is another area where AI is being used with great success. Complex algorithms have been shown to be highly accurate in recognizing patterns in imaging data.

The National Academy of Medicine estimates that about 100 scientific reports dealing with AI in radiology were published in 2005, but the number of publications had increased to more than 800 in 2017.

“Tasks for which current AI technology seems well suited include prioritizing and tracking findings that mandate early attention, comparing current and prior images, and high-throughput screenings that enable radiologists to concentrate on images most likely to be abnormal,” the academy wrote in its 2019 report. “Over time, however, it is likely that interpretation of routine imaging will be increasingly performed using AI applications.”

The company Vetology has provided traditional veterinary teleradiology services since 2010. Two years ago, the company began offering the option of AI analysis of radiographs of the thorax, heart, and lungs in dogs. Results are ready within five minutes and promise an accuracy rate on par with that of a live veterinary radiologist, said Vetology founder and CEO Dr. Seth Wallack, a board-certified veterinary radiologist.

“Studies of MD radiologists have shown that, on average, they’re correct about 70% to 75% of the time. I always tell people I would love to get the diagnosis right 80% of the time,” Dr. Wallack said.

“A feedback loop is crucial to AI improvement. When we catch a problem, we can ask, ‘What did the AI report say, and why did AI interpret it that way?’ Then we tweak things a little bit to help the machine learn, improving future AI results.”

Dr. Wallack recalled a recent case involving a referring veterinarian who thought a dog might be in left-sided heart failure. The owners were contemplating euthanasia. After receiving the Vetology AI radiology report stating there was no evidence of heart disease or heart failure, the referring veterinarian asked Vetology to have a board-certified veterinary radiologist examine the images. Dr. Wallack said, “I received that submission, and there was just enough rotation and fluid in the caudal thoracic esophagus that I thought to myself, ‘I totally see how this could be interpreted as pulmonary edema.’ It wasn’t, and the Vetology AI system read it correctly. I think AI just saved a dog’s life.”

He added, “Our belief has always been that receiving a Vetology AI radiograph report within five minutes or less after taking the radiographs will positively impact patient outcomes. That said, every day I’m blown away by what Vetology AI does.”

Dr. Rolan Tripp is interested in the future of the veterinary profession. He’s been talking about it for 30 years and even founded the Veterinary Future Society. Dr. Tripp believes AI is the future of veterinary medicine.

“I think most people don’t understand how huge of an effect this is going to have, any more than when a hundred years ago veterinarians saw that first tractor out in the field and laughed when it broke down. Many veterinarians today think AI is a fad, but it isn’t. It will revolutionize how we practice veterinary medicine, mostly in a good way,” Dr. Tripp said.

As president-elect of the Veterinary Medical Ethics Society, Dr. Tripp is acutely concerned about the ethical considerations of using AI in veterinary medicine. “This is an almost virgin territory because very little has been written on it and addressed it,” he said.

Dr. Tripp wants the AVMA to work with various stakeholder groups in taking a lead role in anticipating and accommodating the impacts AI technologies will have on the veterinary profession. “We should have a plan to try to steer this machine intelligence because it’s coming in a big way, and most people don’t understand that.”