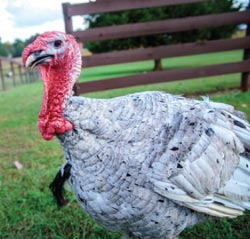 Animal health authorities worked with a farm to depopulate 32,000 turkeys in April and stop an outbreak of highly pathogenic avian influenza.

The HPAI infections near Chesterfield in north-central South Carolina are the first found in the U.S. since 2017, according to the U.S. Department of Agriculture Animal and Plant Health Inspection Service.

Dr. Boyd Parr, South Carolina’s state veterinarian, said the affected birds were 12-week-old tom turkeys that lived in a single barn. Those turkeys also were infected with a low-pathogenic H7N3 strain that circulated among turkeys in the other four barns on the farm.

“That is a strong indication that we found this HPAI in the barn where it made the jump through mutation to the highly pathogenic form and makes us hopeful that we have been able to eliminate this particular HPAI before it spread from this barn,” Dr. Parr said.

Clemson University Livestock Poultry Health tested other commercial poultry in the county and started enhanced surveillance in the area, he said. Testing would continue two weeks following depopulation, and biosecurity and movement controls would last at least three weeks.

The U.S. had its historically worst outbreak of avian influenza in 2014-15, when about 50 million chickens and turkeys died because of a highly pathogenic H5N2 strain that spread among commercial farms.

The study, “Recessive missense LAMP3 variant associated with defect in lamellar body biogenesis and fatal neonatal interstitial lung disease in dogs,” was published online March 9 in PLOS Genetics. The research was conducted by the University of Helsinki with support from Mars Petcare’s Wisdom Health, maker of a dog DNA test.

Using transmission electron microscopy to examine diseased lungs, the researchers found that the affected puppies had defects in their lungs’ secretory organelles causing respiratory distress and ultimately failure. The puppies with the lung disease did not live past the first days or weeks of their lives.

Through a genomewide association study and whole exome sequencing, the researchers found that the puppies had a recessive variant in the gene that encodes lysosome-associated membrane protein 3, a protein within the organelles that produces cytoplasmic surfactant.

Unrestricted access to veterinary antimicrobials remains a global health threat, according to the World Organisation for Animal Health (OIE).

In the fourth annual report on antimicrobial agents intended for use in animals, OIE officials reported almost three-quarters of the 136 member countries assessed by December 2019 lacked sufficient controls over the safety and quality of animal drugs, their importation and sales, or their administration. Without regulation, antimicrobial products circulate uncontrolled alongside fraudulent and substandard versions and are sold regardless of need, the report states.

“This variable quality and unrestricted use of antimicrobial products creates conditions of high risk for the development and spread of resistance,” the report states.

The report notes that the OIE had little information on global patterns of antimicrobial resistance among the pathogens of animals. Studying resistance is key to seeing how often pathogens are resistant and how that resistance evolves.

In 2016, OIE officials published a plan on combating antimicrobial resistance through prudent drug use. The plan calls for education, surveillance, research, improved governance of antimicrobial use, expanding the abilities of national veterinary services, and adhering to international standards.

Antimicrobial sales rise in 2018 but remain down over decade

WHO seeks end to antibiotic use without disease