Pet owners took notice when Hong Kong animal health authorities announced in late February that oral and nasal samples from a 17-year-old Pomeranian tested weakly positive for SARS-CoV-2, the novel coronavirus that causes COVID-19. They worried when, according to an April 22 announcement by the U.S. Department of Agriculture and Centers for Disease Control and Prevention, two cats in the state of New York tested positive for the virus. These were the first cases found in pets in the U.S.

Still, health organizations from the AVMA to the CDC to the World Organisation for Animal Health (OIE) are saying the same thing: There is no evidence to suggest that animals infected by humans are playing a role in the spread of COVID-19, and the human outbreak is being driven by person-to-person contact. However, these health organizations do recommend, out of an abundance of caution, that people ill with the coronavirus limit contact with animals. 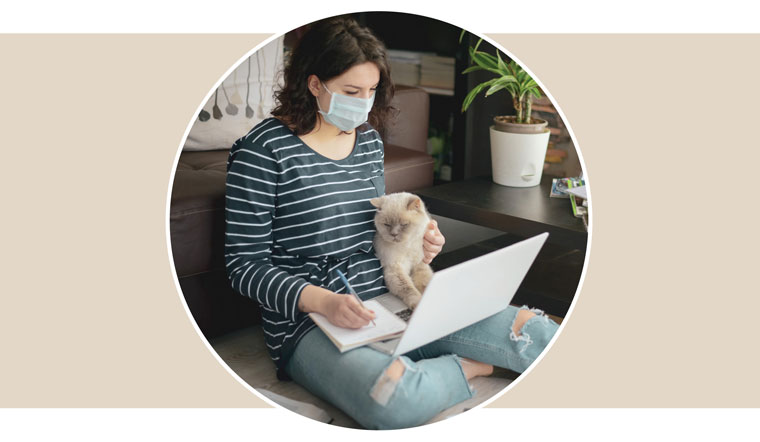 What’s not as widely discussed is that there is evidence that transmission of SARS-CoV-2 from humans to dogs and cats is uncommon, says one expert on infectious disease. Instead, what veterinarians are more likely to find are the usual respiratory ailments in animals that are coughing.

Worldwide, there were nearly 2.5 million human cases of COVID-19 and 178,845 human deaths as of mid-April. Comparatively, the few domestic animals that have previously tested positive for SARS-CoV-2 include the Pomeranian, a 2-year-old German Shepherd Dog in mid-March in Hong Kong, a domestic cat in Hong Kong, and another cat in Belgium, with both the cats testing positive in late March, according to news and public health reports.

The Pomeranian was quarantined, and additional nasal and oral samples also tested weakly positive. Another dog and a cat from the same household tested negative. Subsequently, a spokesperson from the Hong Kong Agriculture, Fisheries and Conservation Department confirmed on March 26 that a positive result had been obtained at the World Health Organization reference laboratory at the University of Hong Kong, and the dog had been infected by the virus.

On March 25, the AFCD reported that virus was isolated from one or more samples collected from the German Shepherd Dog and, on April 3, reported that the dog developed neutralizing antibodies to the virus. The German Shepherd Dog lived with a person with COVID-19 and was quarantined, as was a 4-year-old mixed-breed dog from the same household that tested negative. Neither of the dogs showed signs of disease, and none of the people handling the dogs during quarantine were reported to develop COVID-19.

The owner of the cat in Belgium had COVID-19. The cat was positive for SARS-CoV-2 by a polymerase chain reaction–based assay and had clinical signs of vomiting, diarrhea, and respiratory disease, according to an April 3 update from the World Small Animal Veterinary Association. The condition of the cat reportedly improved nine days after the onset of clinical signs. Dr. Sykes noted that the cat was not examined by a veterinarian, and the owner collected the samples.

The cat in Hong Kong was reported to be subclinically infected with SARS-CoV2. The owner had COVID-19, and the cat was quarantined on March 30. Nasal, oral, and rectal swab samples tested positive, and follow-up samples on April 1 were also positive, according to the Hong Kong AFCD.

The USDA National Veterinary Services Laboratories said April 5 that it tested samples from a tiger at the Bronx Zoo in New York City after several lions and tigers at the zoo showed signs of respiratory illness. Public health officials believe the large cats became sick after being exposed to an infected—but unknown—asymptomatic zookeeper. The zoo has been closed to the public since mid-March, and the first tiger began showing signs of sickness on March 27.

By April 3, three other tigers and three lions were showing clinical signs consisting of a dry cough and some wheezing, according to the OIE. Samples were collected from the first tiger and were confirmed positive for SARS-CoV-2. The other animals with clinical signs and a fifth tiger that never developed a cough later tested positive via a fecal sample test that did not require the animals to be anesthetized.

Finally, the two cats in the state of New York lived in separate areas. A veterinarian tested the first cat after it showed mild respiratory signs. No person in the household was confirmed to be ill with COVID-19. “The virus may have been transmitted to this cat by mildly ill or asymptomatic household members or through contact with an infected person outside its home,” according to the CDC and USDA.

Samples from the second cat were taken after it showed signs of respiratory illness. The owner tested positive for COVID-19 prior to the cat showing signs. Another cat in the household showed no signs of illness.

Both ill cats tested presumptive positive for SARS-CoV-2 at a private veterinary laboratory. The confirmatory testing was conducted at the NVSL. Both cats were expected to make a full recovery, according to the announcement.

Looking at the evidence

Although these cases have drawn much attention, Dr. Sykes said, what often gets buried in stories is how uncommon it is for animals to be infected.

For one, the Hong Kong AFCD had conducted tests on 27 dogs and 15 cats quarantined from households with confirmed COVID-19 cases or in close contact with confirmed patients, and only the two dogs and the cat had tested positive for the virus. None of the animals had clinical signs of disease.

In addition, Idexx Laboratories Inc. said March 13 that the veterinary diagnostic company had tested more than 4,000 samples from dogs, cats, and horses with a PCR assay, and no evidence of the coronavirus had been found, although these were stored samples, and it is unclear to what extent the animals had been exposed to infected people. The samples were collected over a four-week period starting on Feb. 14 from animals in South Korea and the U.S., including impacted areas such as Seattle. The results were confirmed using three assays from the CDC run in parallel. Idexx also noted that its testing has now expanded into Canada and European Union countries, including areas with high rates of COVID-19 in humans, and all tests continued to be negative.

In mid-April, the company announced it was launching a commercial test for SARS-CoV-2 in animals for veterinarians to use, even though routine testing of animals is not recommended by the CDC, AVMA, and others.

Two recent research findings have purported to show evidence that some animals can be infected with SARS-CoV-2 or develop COVID-19.

A report from China published April 8 in the journal Science (jav.ma/SARS-CoV-2study) found that cats and ferrets are theoretically susceptible to infection with SARS-CoV-2, that cats could transmit the infection to other cats, and that ferrets could transmit it to other ferrets, whereas dogs did not transmit infection to a small number of other dogs. Younger cats, age 70-100 days, were reportedly more susceptible than 8-month-old cats.

Dr. Sykes urged caution in reading too much into the paper. The results are based on laboratory experiments involving a small number of animals, including very young kittens, that were deliberately given very high doses of the virus.

“That situation may not be possible to replicate in the field,” she said. “The important thing is that people understand that they’re seeing things about cats spreading infection to other cats, but we’ve not seen that in the real world,” nor have similar findings been described by other researchers.

On April 2, a pre-print manuscript was published in bioRxiv, an open-access pre-print repository for the biological sciences, that described a survey of a random-source domestic cat population in Wuhan, China. The researchers performed serologic testing on serum collected from 39 cats before the COVID-19 outbreak and from 102 cats after the outbreak. Of the 102 cats tested after the outbreak, 15 were positive for antibodies against SARS-CoV-2. Dr. Sykes pointed out that the cats were from shelters and other sources and the extent of their contact with people with COVID-19 was not reported. The researchers also stated that there was no cross-reactivity of their assay with feline coronavirus. The paper is available at jav.ma/Wuhancats.

“Currently, we don’t have any evidence that dogs and cats, and even ferrets, can transmit SARS-CoV-2 to humans outside the laboratory, either as fomites or as virus shedders,” Dr. Sykes said.

If dogs and cats “in the field” can shed the virus, it’s possible the amount of virus shed is too low for transmission to occur, especially if there is no respiratory disease to create airborne droplets for transmission, Dr. Sykes added.

Another manuscript in bioRxiv, published April 9, described testing 21 pets—9 cats and 12 dogs—of 18 French veterinary students, 11 of which had shown clinical signs of COVID-19. No animals tested positive for SARS-CoV-2 by PCR assay, and no antibodies against SARS-CoV-2 were detectable in their blood. The paper is available at jav.ma/vetstudents.

At the same time, veterinarians should be vigilant about the possibility of infections in animals in contact with people who have COVID-19.

The AVMA, CDC, Association of Shelter Veterinarians, and shelter medicine programs at veterinary colleges released “Interim recommendations for intake of companion animals from households where humans with COVID-19 are present” in late March (see story). The document contains a reminder to house pets in the home when possible. If sick people must care for pets or be around animals, they should wash their hands before and after the interaction. If temporary sheltering of pets becomes necessary, bathing of pets on intake is not needed, but the pets should be housed with minimal contact with other animals.

“Pet owners should be told to have their pet evaluated by a veterinarian if signs of a runny nose or eyes, cough, or sneezing develop and not allow their pet to contact other animals in the meantime,” she said.

Veterinarians who may want to test pets for SARS-CoV-2 have to contact state animal health officials first. USDA information states, “At this time, testing for companion animals will only be done if animal and public health officials agree testing should occur due to a link to a known human case of COVID-19.”

After the decision is made to test, the state animal health officials would designate a state-appointed veterinarian, a USDA-accredited veterinarian, or a foreign animal disease diagnostician to collect the sample. State animal health laboratories may conduct animal testing, but any positive samples would need to be confirmed through additional testing by the USDA’s National Veterinary Services Laboratory.

“What’s important for vets to know is that a single positive test result on an apparently healthy domestic animal, like the Hong Kong cat, when it’s done as a screening test, has predictive value problems. When prevalence of infection is really low ... that magnifies the potential for false positives,” Dr. Sykes said.

The AVMA has information on what to do for pets in homes with owners with COVID-19, testing companion animals, how to keep pets safe, and more at jav.ma/SARS-CoV-2inanimals.

The AVMA offers additional information and resources at avma.org/coronavirus. This is a rapidly evolving situation, and information will be updated as it becomes available.