Dr. Carmen Fuentealba, dean of the newly accredited Long Island University College of Veterinary Medicine in New York state, knew what needed to be done to open a veterinary college and she did it swiftly.

“The university is behind this project, and it has been a really easy process from that point of view,” she said.

LIU, a private institution, will welcome its first 100 veterinary students in August to its Post campus in Brookville, about 27 miles east of New York City.

The veterinary college received a letter of reasonable assurance from the AVMA Council on Education in October. The veterinary college got the go-ahead just two years after applying for a comprehensive site visit from the COE—a quick turnaround for the accrediting body. Typically, potential veterinary programs ask for a consultative site visit to gauge how the COE will evaluate them before moving on to a comprehensive site visit (see chart). A letter of reasonable assurance is not a pre-accreditation action, but indicates that the institution may gain accreditation in the future if the program follows through with all the plans it presented to the COE.

She said the experience at these three programs taught her how the accreditation process works and that LIU’s success with the first step toward accreditation resulted, in part, from the veterinary college being able to quickly schedule a comprehensive site visit with the COE. The university hired Dr. Fuentealba in August 2017.

“The next opening wasn’t until three years later, so we jumped. We had consultants that reviewed the documents that I prepared to register the program with the New York State Education Department as well as the self-study. They confirmed what we needed to do, and we prepared to address the areas of weakness.” 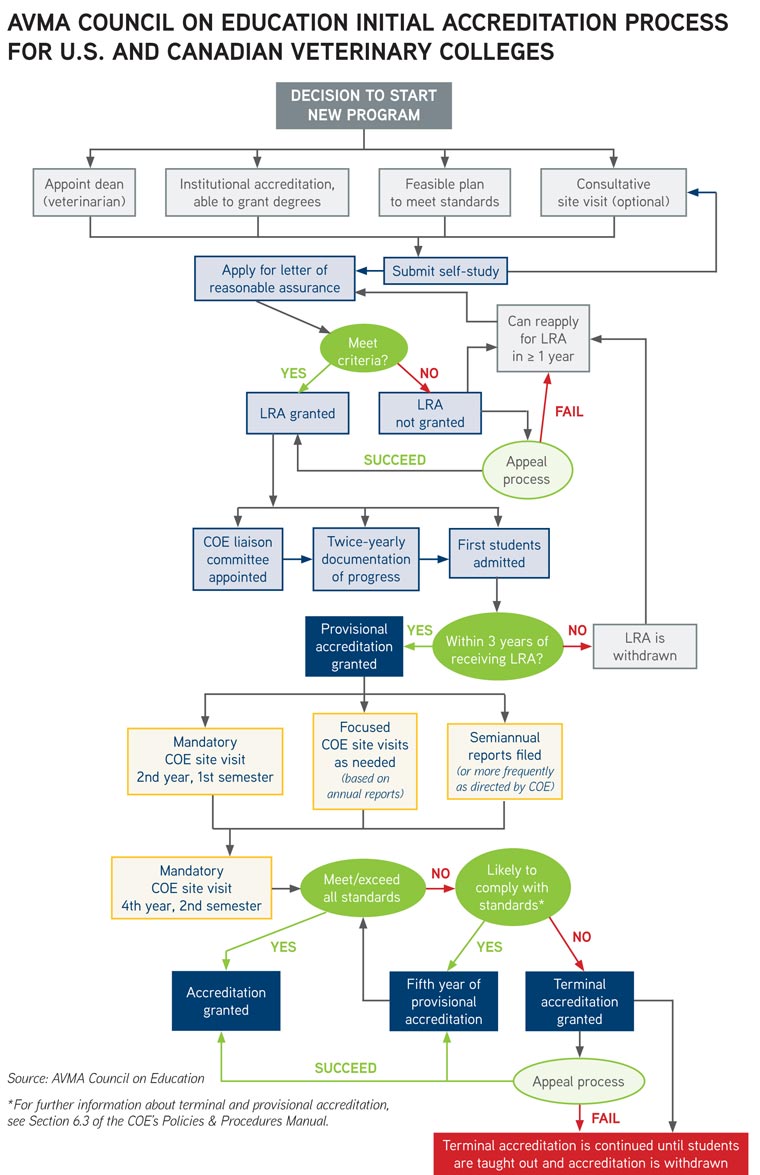 Amid the positive news from the COE, LIU has been dealing with some challenging issues the past few years, including conflicts between the leadership and faculty, a decrease in enrollment numbers, and a low graduation rate.

The U.S. Department of Education College Scorecard, a tool that uses data to compare institutions in the U.S., lists the graduation rate at LIU as 51% with a first-year retention rate of 76%. Specifically, out of 3,020 full- and part-time students, a little over half graduated, 37% transferred, and 12% withdrew.

“The College of Veterinary Medicine is a key transformative initiative in solidifying the university’s position as a national teaching and research university,” said Christopher Fevola, chief financial officer at LIU. Fevola did not comment directly on why the LIU Board of Trustees decided to open a veterinary school, but said there is a need for more veterinary colleges in the U.S.

The Bureau of Labor Statistics reports that employment of veterinarians is projected to grow 18% from 2018-28.

Tim Atkinson, executive director of the New York State Veterinary Medical Society, said there is a lack of veterinarians across the U.S.

“There is a growing gap between the number of open positions for veterinarians and the number of veterinarians available to fill them, not just in New York but around the nation,” Atkinson said. “We hope that graduates of LIU may help our members recruit the staff they need to grow their practices.”

“The university made the decision, knowing from the beginning this is the money we need, the infrastructure, faculty, equipment, research support. And they went in knowing what it was going to cost. Where the initial money was coming from was not my responsibility,” Dr. Fuentealba said. “I just told them, ‘This is what they need.’ Now that we have the letter of reasonable assurance, I will start fundraising for scholarships and additional facilities.”

Dr. Fuentealba is optimistic about the future of the veterinary college and the team she has built.

However, other staff members inside the university are not so positive. Some LIU faculty members, who would not comment on the record, are concerned about the viability of the program and the burden it will place on the university.

There has also been a 14% drop in operating revenues from 2014 to 2019, from about $396.5 million to $341.4 million, according to the Inside Higher Ed article, which sourced the numbers from audited financial statements. However, net assets have risen substantially in that same time, from about $291 million to around $506.9 million.

Several programs, both on the New York City and Post campuses, have also been defunded or will not accept new students, including Bachelor of Arts programs in chemistry, history, philosophy, sociology, and physics; Master of Arts programs in political science, art history, and art; and a Master of Science program in applied mathematics.

Bachelor of Science programs in geology, geography, and earth sciences and Bachelor of Arts programs in art history and Spanish had been cut previously.

The anonymous faculty members said denying promotions and freezing other programs appears to be an attempt by leadership to offset the high cost of the veterinary college.
Some students have spoken up about issues at the university.

The veterinary college is expected to open a new 47,000-square-foot facility later this year; however, construction has yet to begin. The estimated cost is around $40 million.

University leadership has been supportive in finding alternative space to teach the inaugural class in case construction is not completed in time, Dr. Fuentealba said.

LIU also signed a 10-year lease with the Commack School District for the Marion Carll Farm, one of the last homesteads in the area. LIU paid the school district $50,000 for 6 acres of the property and will continue to pay $15,000 a year in rent for the first five years and $20,000 for the remainder of the lease. The land will reportedly be used for grazing animals that students from the veterinary college would use for practicing clinical skills on, among other things related to the veterinary college.

Despite the slow progress on new construction and tension in some areas of the university, Fevola said the veterinary college has been met with a positive response from government agencies, health communities, and donors alike.

“LIU’s financial position is the strongest in its long history,” Fevola said. “The university is fully committed to ensuring world-class facilities, faculty, researchers, and student support for our inaugural class.”

Fevola would not comment specifically on how much the university has raised toward its $40 million goal for the veterinary college, but pointed to a $12 million commitment from the state of New York in 2018 and several million dollars of private gifts.

“This positive momentum and financial support all occurred prior to LIU earning its letter of reasonable assurance from the AVMA COE. With this important step toward accreditation now completed, a whole new wave of development opportunities are presenting themselves, and we expect total financial support to continue to grow significantly,” Fevola said.

Tuition for veterinary students is expected to be around $55,000 per year, according to the LIU website, which will be among the top 10 highest tuition rates for U.S. veterinary colleges.

“Tuition and fees for the College of Veterinary Medicine compare quite favorably with peer colleges and universities in the region and around the country,” he said.

The veterinary college will use a distributive teaching model, which means that LIU will not build a teaching hospital but will instead partner with organizations in the area where students can do their clinical training during their fourth year. Students will also have supervised clinical experiences throughout their degree program.

“Growing up, I knew there needed to be something more here,” she said.

Dr. Rosenthal added that she is excited to be a part of the founding faculty and to get started.

“There’s excitement from all the veterinary faculty,” she said. “It almost feels like we are horses at the starting gate, but the starter hasn’t lifted the gate yet.”