The percentage of veterinarians who consider the suicide rate in the profession to be a leading concern increased from 80% to 89% between 2017 and 2019, according to the second Merck Animal Health Veterinarian Wellbeing Study.

The North American Veterinary Community, a nonprofit that provides continuing education and other services, renamed its flagship conference as VMX starting in 2018. VMX 2020 attracted more than 18,000 attendees and offered more than 1,200 hours of CE, including hands-on workshops, a multitude of program tracks, and hundreds of speakers.

Merck Animal Health conducted the well-being study in collaboration with the AVMA. Brakke Consulting Inc. sent an online survey in September and October 2019 to a nationally representative sample of 20,000 veterinarians and received 2,871 usable responses. Data were weighted on the basis of age, gender, and region.

Of 14 dimensions of job satisfaction, veterinarians rated highest the statements “I’m invested in my work and take pride in doing a good job” and “My work makes a positive contribution to people’s lives.”

Along with the suicide rate, leading concerns for veterinarians again included stress levels and educational debt. Other top concerns were the ability to retire or exit the profession, a declining willingness among clients to pay for veterinary care, and cyberbullying and vicious online reviews. Just 43% of veterinarians would recommend a career in the veterinary profession, citing educational debt and low pay as the main reasons, compared with 41% in 2017. The study found that veterinarians’ well-being on average was unchanged between 2017 and 2019.

Veterinarians increasingly agreed with the statement “Veterinarians are caring toward those with mental illness,” with 24% agreeing in 2017 and 57% agreeing in 2019. Nevertheless, in 2019, 52% of distressed veterinarians who needed mental health treatment or therapy in the past 12 months said they didn’t get it.

Using the Mayo Clinic Physician Burnout and Wellbeing Scale, the study found that veterinarians, despite working fewer hours, had a higher rate of burnout than physicians, with a mean score of 3.1 on the 7-point scale versus 2.24.

The prevalence of serious psychological distress in veterinarians was consistent with that for the general population of employed U.S. adults. Veterinarians are much more likely to think about suicide than nonveterinarians, however, and more than 2.7 times as likely to attempt suicide.

“This study affirms that more veterinarians are comfortable discussing mental health related topics and there has been a significant increase in the number of respondents who believe that veterinarians are caring toward those with mental illness. That’s an incredibly positive shift in the last few years and suggests that educational efforts to reduce stigma have had a measurable impact,” said Dr. John Howe, president of the AVMA, in an announcement about the study. “In addition, this study links the data to practical and realistic strategies that individuals and organizations can apply to enhance wellbeing. As an organization that serves veterinarians, our mission is to protect the health and welfare of our members and the future of the profession. The more clarity we have on contributing factors, the greater confidence we have in developing resources that create a substantive difference.”

The study found that veterinarians who were not distressed were more likely than distressed veterinarians to do the following: have a healthy method for dealing with stress; spend time with family; hike, walk, or participate in sports; exercise; socialize with friends; spend time on a hobby; sleep at least eight hours a night; read for pleasure; volunteer; have a financial planner; and limit time on social media.

Merck Animal Health made a second $100,000 commitment following up on its 2017 pledge to support the AVMA’s well-being resources, many of which are available at the AVMA's Wellbeing webpage. 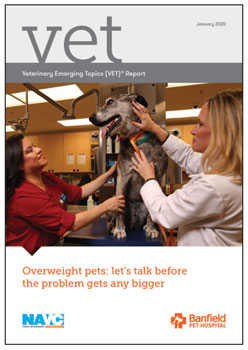 As before, Banfield released its VET Report in partnership with the NAVC. The 2020 report examines overweight pets and weight management, building on the 2019 report about the management of osteoarthritis in overweight and obese dogs and cats.

According to the new report, 51% of the 1.9 million adult dogs—age 2 and up—seen at Banfield’s more than 1,000 hospitals nationwide in 2018 were overweight. Less than 10% of those dogs were successful in losing 10% of their body weight in the three to six months after diagnosis. Of those that did initially lose at least 10% of their body weight and were then classified as healthy weight, approximately 40% regained weight and were reclassified as overweight six to 12 months later.

Owners of dogs that lost weight and kept it off were more likely to have multiple dogs in the house, to report consistently measuring daily food portions, and to use pet care services such as pet walkers, but not dog day care.

To improve patient outcomes, the report made the following recommendations for veterinary teams:

According to the conclusion, “Setting reasonable expectations, celebrating successes, acknowledging failures and relapses and learning from them, and adjusting the weight loss plan when appropriate are some of the basic concepts for pet weight loss programs identified throughout this report.”

Insurance for avian and exotic pets

About 15% of U.S. pet owners keep a bird or an exotic animal as a pet, according to Nationwide. As with dogs and cats, these pets require veterinary care that can sometimes put a strain on their owners’ finances. According to Nationwide, the top health conditions in these species are dehydration or constipation for small mammals, at a mean treatment cost of $483; feather picking or loss for birds, $305; and internal parasites for reptiles or amphibians, $72.

The new health insurance plan is the only one available for avian and exotic pets in the U.S., according to the announcement. The plan reimburses up to 90% of eligible veterinary expenses, inclusive of the most common medical conditions for these species, and includes an option for preventive care.

As part of VMX, the NAVC announced Embrace, a new legislative advocacy program to give veterinary professionals and pet owners a platform to advocate for animals. The program launched with a call to action in support of a resolution and two bills in Congress: a resolution to support designation of National Animal Rescue Day, the Strengthening Support for Veterans with Service Animals Act, and the Puppies Assisting Wounded Servicemembers Act.